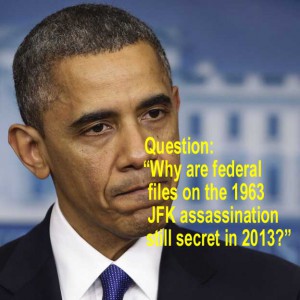 Hollywood and the media have produced and are producing a body of work that by and large perpetuates the official story of 1963 or threatens to further muddy the waters, while ignoring the massive amount of research—and general consensus by most researchers, the public and a congressional committee—that there’s far more to the story.

At WhoWhatWhy, we think the public has a right to something better. To real inquiry that follows fact trails wherever they go. To a kind of fearlessness in search of explanations that might not be “wise” in a conventional journalistic career but that distinguish the only kind of journalism truly worth its salt.

Over the past few years, we’ve published a number of articles on JFK (and on the equally problematical official account of his brother’s death and that of Martin Luther King).

We’re determined to do more. But it’s hard when you’re a small outfit with limited staff and financial resources. Nevertheless, we’ll keep at it.

In the meantime, here are links to relevant articles we’ve already published over the past several years. See which ones are of interest. And please spread the word by using social media and email lists to alert others.

The media can’t get enough of those Kennedys. The more banal the better. No depth, please!

Gerald Posner, a leader in claiming Lee Harvey Oswald had no CIA ties, back after all these years, representing the Afghan president’s brother—and claiming that man has no CIA ties either.

What Obama is Up Against

Ongoing threats to presidents who buck the system. The New York Times is suspicious of a government coverup, involving an autopsy! (Er, in Russia, that is.) The NY Times’s Ostrich Act on JFK Assassination Getting Old

It’s not easy being the Grey Ostrich. Fifty years is a long time to keep your head in the sand.

Sometimes, only a “comedian” can tell the truth. Bill Hicks on the Kennedy assassination. The New York Times has a good laugh about coincidences in the Kennedy assassination. See if you buy their reasoning. More on the Umbrella Man—and some thoughts on the cover he provided.

The Military and Those Strange Threats to Obama Are these “reminders” to Obama about who really is in charge?

The Deaths of JFK, RFK and Silence of the Lambs Here’s how Hollywood and the media establishment package stupidity for easy pouring into our heads.

Back when he was a reporter, Bill O’Reilly was hot on the trail of the JFK assassination—and he bravely reported evidence of conspiracy and intelligence connections. Now that he’s a Fox zillionaire, well….. Those who could tell all know to keep quiet. And those who know pieces of the story get ignored.

A Closer Look At the Secret Service Those wacky Secret Service agents are at it again! You’ll want to hear what Abraham Bolden has to say. What if an eyewitness came forward with evidence of conspiracy? What would happen? NOTHING. Why, yes! And that’s none other than Barack Obama withholding JFK assassination records. A Democrat. Very belatedly, a modest effort to right a wrong done to one Secret Service agent who did try to halt the unthinkable.

Dallas Diminishes JFK, His Legacy, and Those Who Care About Democracy When it comes to covering up its disgraceful history, the city of Dallas is just tops. Growing evidence that Sirhan Sirhan was not acting alone—and was not the primary shooter of Robert F. Kennedy. A classic, popular in England, squelched in the USA.

For those who like their news spoken not typed—Russ Baker on TV, discussing the Kennedy assassination and the government’s ongoing efforts to block crucial records releases.