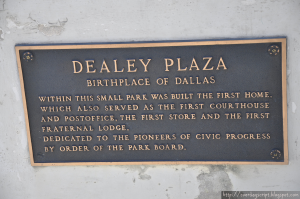 The Dallas Morning News, notoriously uninterested in real journalism about the most infamous event ever to take place in its city, recently ran a JFK-related piece in its entertainment section. One of a flood of stories purporting to provide insight into the event as we head toward the 50th anniversary, it was headlined:

Looking for fiction about the JFK assassination? Choose carefully

Now, why would we need fiction about the JFK assassination, when most of the purported “fact” put out by the establishment is, as any serious researcher will tell you, straight from someone’s imagination? Nevertheless, here is this article on what to look for among offerings that openly proclaim themselves fanciful accounts.

Before the author of the Morning News piece gets to his favorite novels, however, he must show obeisance to the mandatory establishment line on the event itself:

With next year’s 50th anniversary of the JFK assassination in sight, Dallas is about to experience a torrent of books revisiting Nov. 22, 1963, and its long aftermath.

There will be memoirs such as the recent one by Secret Service agent Clint Hill. There will be self-published “I saw three Guatemalan midget shooters on the grassy knoll” conspiracy books. There will be several charging that LBJ was behind it all. (LBJ is currently a growth industry in conspiracy circles.)

There will be books claiming that Oswald, or whoever, ended the reign of Camelot (see Bill O’Reilly’s Killing Kennedy: The End of Camelot, published this October). No matter that the idea of the Kennedy years as an incarnation of a golden age in American history was a whole-cloth fantasy concocted by a shell-shocked Jackie Kennedy two weeks after her husband was killed. [snip]

Many might find these opening paragraphs deeply offensive, with their snide, even vicious references to hallucinating losers seeing “Guatemalan midget shooters”; gullible fools feeding a “growth industry;” and Jackie, all alone, “concocting” a “whole-cloth fantasy” that John F. Kennedy was actually doing important things when he was cut down.

Now, why would a “respectable” newspaper publish this kind of thing? And who would write it?

At the bottom of the essay, we learn that “Special Contributor” Don Graham

“is the J. Frank Dobie Regents professor of American and English literature at the University of Texas at Austin, where he is teaching a course on the history of the Kennedy assassination. He’s the author of several books on Texas culture, including State of Minds: Texas Culture & Its Discontents and Kings of Texas: The 150-Year Saga of an American Ranching Empire.

It’s amazing that in a liberal city like Austin, a formidable university would have an endowed chair occupied by someone willing to write such an article. Or is it? Is it any coincidence that a school largely funded by people who have little use for JFK and his attempt to change the tax structure for oil interests would have a person “teaching a course on the history of the Kennedy assassination” who is capable of ignoring the many books by serious researchers that present evidence of an organized hit? Prof. Graham apparently cannot fathom that long-time fans, enablers and perpetrators of violent coups against democratically elected leaders abroad could possibly support or cover up yet another coup, albeit a domestic one, against a man they deemed a threat. The professor is also content to ignore the final report of the House Select Committee on Assassinations (1979), which concluded that Kennedy was most likely killed as the result of a conspiracy.

But the Morning News does not stop there. It publishes a letter in reply, from another professor, declaring that students at Dallas-based Southern Methodist University are being taught the truth about the assassination of John F. Kennedy.

The headline on the Letter to the Editor is bold:

You want to talk JFK assassination? Bring it on.

Now, a reasonable person, having read Prof. Graham’s essay, might reasonably assume that the Morning News would seek to create some balance by publishing letters from those who disagree. And the headline would seem to confirm that this letter presents another perspective. But does it? Let’s take a look.

No reader of serious fiction inclined to tackle Libra, Don DeLillo’s challenging but deeply rewarding novel about the events leading up to the assassination of President Kennedy, should be deterred by the essayist’s facile and reductive synopsis of its plot. DeLillo has about as much in common with Oliver Stone as does a fine wine with a Bud Lite.

Also, I hope your promised series of articles on the assassination will include something more useful than a detailed debunking of a conspiracy theory that no one but the wingiest wing nuts has ever taken seriously

I have been teaching courses at SMU on the assassination and its aftermath for 20 years. It really is possible to have interesting conversations about the controversies and the texts that have presented and prolonged them, and if anyone doubts that, my students and I will be happy to show you how it’s done.

Curious about Tom Stone, I looked him up and found an article from the campus paper at SMU—Dallas-based Southern Methodist University– headlined “Students Study Kennedy Assassination.” It describes Stone’s class, in which he shows the work of another Stone, the film JFK by Oliver Stone. It quotes a student:

“It was cool because you walked out of seeing the movie totally believing in this huge conspiracy theory,” junior Brian Fox said.

What will happen to these students when they start researching for themselves and discover that Professor Stone is oddly unaware of or uninterested in the veritable mounds of evidence that Oswald either was not the shooter or that he did not act alone? How will they feel about the trustworthiness of SMU overall, and the education it provides?

Then we learn that SMU is to “Host Yearlong Series of JFK Programs on 50th Anniversary of Assassination”:

Southern Methodist University will partner with the George W. Bush Presidential Library and Museum and the Sixth Floor Museum to host a yearlong series of public programs that will begin on President’s Day.

Oh—and SMU’s academic “heart,” Dedman College, has a professor, Daniel T. Orlovsky, who is the George A. Bouhe Research Fellow in Russian Studies. Who was George A. Bouhe? He was one of the staunchly anti-communist Russian émigrés in Dallas who bafflingly squired the supposedly pro-communist Lee Harvey Oswald during the period between Oswald’s return to Dallas from the USSR and the shooting of JFK. You can read all about the strange relationships in Dallas’s Russian community in my book Family of Secrets .

You can also read about how George H.W. Bush couldn’t remember where he was on Nov. 22, 1963, and about the first President Bush’s relationship with another Russian émigré in George Bouhe’s circle, the intelligence-connected George de Mohrenschildt, who was Oswald’s closest friend after Bouhe passed Oswald on.

From SMU’s website one can also learn that Prof. Orlovsky spent some time at the Defense Language Institute in Monterey, California, with its close ties to the intelligence apparatus.

One might note that, after other universities declined to host it, SMU became the home of the George W. Bush Presidential Library and Museum – a center of scholarship and celebration of a president who, most famously, lied his country into a war.

The articles cited above all note that SMU is collaborating closely with the Sixth Floor Museum, the main place we’re supposed to go to learn what really happened on Nov. 22, 1963. For a sense of the reality the museum wishes to dispense, visit not just the displays, but also the bookstore.

On the day recently when I was there, I noted the prominent display given to Vincent Bugliosi’s interminable and also wildly inadequate defense of the Warren Commission and its “lone kook” argument. I did not see any of the many notable books by journalists, scholars and the like representing the other side. There may have been a few copies scattered around, but they certainly did not register.  Could this imbalance be accidental, a sign simply of incompetence? Or could it be something else? On another wall I noticed a display unrelated to the assassination, focusing on presidents, with special prominence given to George W. Bush’s highly selective memoir, Decision Points.

While I was in town I read that the official Dallas ceremony on the fiftieth anniversary will feature the historian David McCullough reading excerpts from JFK’s speeches.

One does have to wonder why the Dallas establishment chose someone best known for writing about Harry Truman, not JFK. With a little searching, they might have found a thoughtful person who could demonstrate that JFK’s determination to do battle with corporate, military and intelligence elites –not to mention  the kind of folks who run Dallas to the present day—was something more than “a whole-cloth fantasy” concocted ex post facto by Jackie and her acolytes.

Perhaps McCullough will point to the internecine warfare raging in the United States in the early 60s, and show how our democracy was so badly wounded that dark November day that it has yet to recover. Perhaps he will explain how many of the crusades that Kennedy set in motion—restricting offshore tax shelters, regulating monopolies, doing something about the corruption of politics by big money, tackling Wall Street influence and the Federal Reserve, controlling militarism and reining in the national security apparatus—are still being successfully resisted by entrenched interests.

It would certainly be a welcome surprise to see Dallas do the right thing, after all this time.  But don’t hold your breath.

98 responses to “Dallas Diminishes JFK, His Legacy, And Those Who Care About Democracy”