WHO On the Air: Russ Baker on the 51st Anniversary of JFK’s Assassination - WhoWhatWhy
Reading Time: 2 minutes 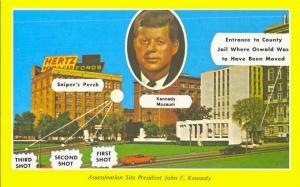 That’s the topic of WhoWhatWhy Founder and Editor-in-Chief Russ Baker’s discussion with popular KGO radio host Pat Thurston, taped on the 51st anniversary of the assassination. And the facts are all the more relevant, now that plans may be afoot for a third President Bush.

For more in-depth insight into the Bush-JFK connection and the assassination itself, please take a look at the following reading list. It starts with the first of 10 excerpts from Russ’ best-selling book Family of Secrets: The Bush Dynasty, America’s Invisible Government and the Hidden History of the Last Fifty Years. After that is a collection of our independent investigations and coverage of one of America’s most enduring mysteries: the JFK hit.

Bush and the JFK Hit, Part 2: Skull and Bones Forever

Bush and the JFK Hit, Part 6: The Cold War Comes to Dallas

Bush and the JFK Hit, Part 7: Empire Strikes Back

Bush and the JFK Hit, Part 8: Prepping a Patsy?

Bush and the JFK Hit, Part 9: Planning a Nightmare on Elm Street

Bush and the JFK Hit, Part 10: After Camelot

JFK: The Never-Ending Wait for Answers

Dallas Diminishes JFK, His Legacy, And Those Who Care About Democracy

A Closer Look at the Secret Service

The NY Times’ Ostrich Act on JFK Assassination Getting Old

One response to “WHO On the Air: Russ Baker on the 51st Anniversary of JFK’s Assassination”