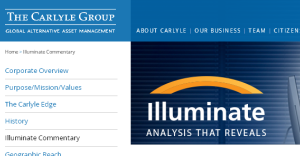 Not the “Illuminati”! Illuminate

Some things you truly cannot make up. Like this: the museum and archives celebrating and exploring the life (if not really wanting to investigate the death) of John F. Kennedy is getting a facelift—courtesy of….the Carlyle Group.

This development was noted, without much fanfare, in a variety of major media. If there was a smidgen of irony, I missed it.

Yet, consider this: The ultimate globe-girdling corporation is playing a major role in preserving the memory of a president who at the time of his death was engaged in what may be described as mortal combat with outfits not unlike Carlyle—if smaller and less global. (I write about this in my book Family of Secrets but you can learn a lot more about JFK versus the corporations in Donald Gibson’s Battling Wall Street: The Kennedy Presidency.)

Kennedy was locked in grim battle with oil and steel and banking interests, hated by mining giants and soda pop companies, resisting pressures from the burgeoning defense industry, and on and on. The list of the offending and the aggrieved was endless. Executives were taking out ads to excoriate him, and even showing up at the White House to practically spit in his face.

“Those robbing bastards,” JFK told Walter Heller, chairman of the Council of Economic Advisors, when Heller mentioned the oil and gas industry. “I’m going to murder them.”—as cited in Family of Secrets, from audiotape held by John F. Kennedy Library and Museum

Why is the museum getting a facelift? Apparently, it is to “enhance the visual and interactive offerings.”

Does none of it have to do with the still-mysterious fire that broke out at the museum complex in Boston at approximately the same time as the bombings of the Boston Marathon? Initial news reports suggested that the fire might somehow be linked to the bombings, an event that led to the precedent-setting lockdown of a major American city in a military-style operation.

As with, well, practically everything about that day, we have since been assured that there was in fact no deeper mystery regarding the museum fire—that its cause was accidental and its timing a coincidence. And of course it may well have been, though I (a past user of the archives’ services) was struck by what seemed like a sheepish lack of openness on the part of library personnel when I made inquiries. Call it a reporter’s instincts.

JFK, who entered the White House as outgoing president Eisenhower warned about the dangerous growth of a “military-industrial complex,” battled constantly with the same forces that today virtually reign supreme. He was an enthusiast of attempts in the mass media to draw attention to threats to freedom here at home, as seen in such movies as Seven Days in May, about a military coup against the U.S. government, and The Manchurian Candidate, about the subversion of our democratic system through mind control.

Times have certainly changed. The CEO of Carlyle, it should be noted, is a Democrat. He worked for Jimmy Carter. Other figures in the Carlyle orbit over the years have been Republicans—including George H.W. Bush, former Secretary of State James Baker III, and former Defense Secretary Frank Carlucci—and high-profile foreigners, including British Prime Minister John Major and members of the bin Laden family.

Carlyle itself is one of the increasing ranks of strange companies that seem to come out of nowhere and are suddenly everywhere and into everything. (You really must treat yourself to a review of its holdings; even in the constrained precincts of Wikipedia, it’s still a wonder to behold—if you just drill down one level, from the military contractors to the pipeline companies, many of which it bought undervalued, reinvigorated with new government funding, and then sold off at great profit.)

As Carlyle puts it on their site:

We are one of the world’s largest and most diversified alternative asset management firms. We manage 120 distinct funds and 133 fund of funds vehicles that invest across four segments, 11 core industries and six continents. Our global size, scale and brand enable us to access opportunities in virtually every market around the world.

Carlyle is the kind of massive, opaque entity that draws its breath and its profits from knowing the right information and having the right connections. As such, it attracts almost no public attention…except when it chooses to do something philanthropic to “enhance” its public image.

We have every right to be amazed that the directors of the John F. Kennedy Presidential Library and Museum decided they needed money so badly that they would take it from the likes of Carlyle. Even more amazing is that they thought, correctly as it turns out, there would be no criticism of this decision and no consequences.

But really—why be amazed? The world has changed a great deal since John F. Kennedy was precipitously removed from the picture after rousing the ire of the very selfsame kinds of interests that today rule the roost.