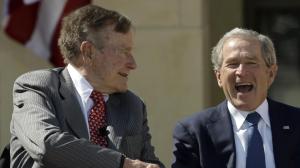 From the advance notices (flacked by a heavy publicity campaign), we know that this singular two-generation duo plans on telling an inspiring story of a heroic and selfless individual who shaped national and world events. This is clearly part of a larger effort playing out in the media since the last presidential election.

We’ve seen the elder Bush, who served as CIA director before his time in the White House and who ruthlessly attacked his opponent in the 1988 election (the Willie Horton incident), recast in fawning profiles as a loveable fellow who designs wacky socks, jumps out of airplanes on his birthdays and shaves his head in solidarity with a young cancer victim.

Could it be that this quintessentially ambitious clan wishes to nudge the Bush brand away from the George Bush of “Mission Accomplished” and “heckuva job, Brownie” by turning our attention to carefully reformulated memories of the “kinder, gentler” George Bush?

Might this odd literary project be driven by an ulterior motive: to clear the way for a third president Bush—George W’s brother, Jeb?

Taking W. out of the equation to help elect Jeb?

In any case, why would we trust George W. Bush—the man who hired image-master Karl Rove for a top-to-bottom makeover, the man who never credibly explained how he was able to forsake his National Guard obligation during the Vietnam war, the man who assured us Saddam Hussein had an arsenal of Weapons of Mass Destruction—to give us the real inside story of his father?

If you have read my book, Family of Secrets, you know that there is a great deal to learn about this hard-edged, calculating and consummately Machiavellian clan that it is unlikely to share with the public.

The publisher of 41 plans to put out one million copies. If you get a chance to assess George W’s claims about his father, and have read Family of Secrets as well, you may wish to lend your voice to the discussion on 41’s Amazon page customer reviews or any other discussion of 41 around the web. You can see my Amazon review here and add your voice to the conversation. By speaking out, you’ll be letting people know that those with the highest-priced microphone don’t necessarily offer the most credible output.