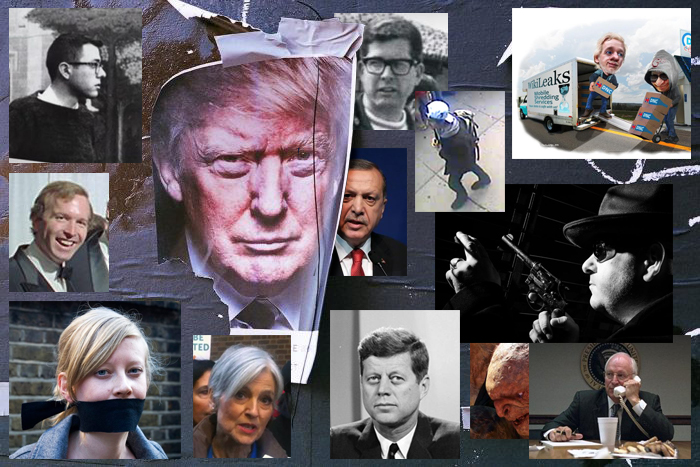 With the cavalcade of jaw-dropping events in 2016, we all had a lot to absorb. And some important things might have gotten lost in the noise. Among them, noteworthy stories published here at WhoWhatWhy. As we close out the year, we thought we’d share some favorites with you.

Admittedly, a lot of what we covered won’t make you feel great about the status quo. But we believe that the first step toward fixing the many problems the world is facing is to be aware of them. While we pride ourselves on having recognized many of these issues early on, it gives us no pleasure to be able to say, “We told you so.” Instead, being “right” is simply the motivation we need to continue our work — with your help.

The People and Their Issues

The US, notwithstanding its oft-stated, lofty intentions, too often proves to be a country of —  and for —  elites. At WhoWhatWhy, we not only try to hold this all-powerful minority to account, we also endeavor to shine a light on the challenges and struggles facing ordinary people. Here are some stories reflecting that.

A Dark View from Flyover Country

Midwest-based journalist Sarah Kendzior thinks things are going to get a lot worse. In this astonishing, attention-getting interview with WhoWhatWhy’s podcaster Jeff Schechtman, Kendzior offered her perspective from mid-America: that the election is just the opening act of a future rife with fascism and violence.

As the rich get richer, things are not getting easier for American workers. In a two-part Labor Day series, WhoWhatWhy examines the challenges they face as the economy changes yet again.

Agriculture’s biggest deal ever — the Bayer-Monsanto merger —  might leave farmers and consumers paying more for less, and could accelerate a catastrophic decline in the diversity of what we plant and eat.

Using a dubious strategy, a major law firm is trying to hamstring Greenpeace and other environmental groups on behalf of a paper manufacturer. If the ploy succeeds, it would have a chilling effect on free speech.

WhoWhatWhy chose not to cover the election as a horse race. We actually focused on the issues. And we raised alarms about efforts to suppress the vote, and about real problems with the voting machinery itself. We also investigated campaign finance abuses, often leading the media in this effort.

The Back Story to Trump’s Astonishing “Strong Christian” Lie

Donald Trump proved himself a man who could say almost anything in pursuit of votes. But when it came to perhaps his least sincere assertion of all, on religion, he really took the cake.

The Documentary on Donald Trump He Tried to Suppress

In early 2016, back when Donald Trump was considered by most of the media as little more than a great source of entertaining headlines, WhoWhatWhy obtained and released a suppressed documentary from the early ‘90s that took a very hard look at the candidate, his business and personal practices, values, and behavior. It is now more relevant than ever before.

WhoWhatWhy caught Donald Trump looking for donations from foreign nationals — even though he clearly knew it was against the law. Our reporting led two watchdog groups to demand a DoJ investigation of Trump’s campaign.

Hillary Clinton triumphed over Bernie Sanders largely on the basis of a strong vote from African Americans. She was able to win because of help from the media in obscuring Sanders’s much stronger civil rights credentials. And history was changed forever. WhoWhatWhy saw what happened — and told you.

The New York City Board of Elections confused voters with a misleading mailer — potentially hurting populist candidates. Was this an accident? Either way, the authorities showed little concern about fixing it.

Early on in the election cycle, WhoWhatWhy sounded the alarm on the various strategies state governments were using to suppress the vote. Here is just one example.

Way ahead of the pack on what would become a towering issue, we warned how relentless cyber attacks — combined with lax security measures — not only put the data of Americans at risk but could potentially  affect the election outcome.

WWW Digs: Did the 2014 Sale of a Manhattan Rat Den Lead to Brooklyn’s Voter Purge?

Shortly after Hillary Clinton won the New York primary, the theory emerged that a Clinton-connected Manhattan real estate deal could be tied to the purging of tens of thousands of Democratic voters from the rolls. We looked into the allegations and determined that they were unfounded.

Why would 4,000 people show up to an election and end up not voting for the most important race? We looked for answers in one of the many stories we did as part of our comprehensive presidential recount coverage.

The FEC, America’s top election watchdog, is failing. The agency’s former chair spoke with WhoWhatWhy about how hopeless the situation has become — as those who want to enforce federal election laws are impeded every step of the way by a system designed to fail.

A lot of what goes on in the world is not “politics” — it is “deep politics,” the machinations of the powerful, operating in the shadows. Here are some articles we did on this subject.

WhoWhatWhy’s global exclusive — a first list of JFK assassination-related documents that the government acknowledges still withholding even after half a century. With the authorities promising to finally release remaining documents in October, 2017, this list is an important curtain-raiser.

In the aftermath of Turkey’s failed coup, a mystical Islamic movement — preaching dialogue and education (and run by an exile in the United States) — is being accused of fomenting it. But was the CIA also involved? And what would be next for Turkey? We took a close look as part of our unrivaled coverage of what’s happening in this crucial country.

Capturing Osama bin Laden would have had an unimaginable intelligence value. Yet we were later told that it was left up to the Navy SEALs to decide whether they would capture or kill the man. At the decisive moment, the raiders’ headcams, monitored at the White House, stopped working. Then the US supposedly threw the Saudi man’s body into the ocean — purportedly on the advice of the Saudi royals.

These are just some of the many holes in that story, and we were among the very few to talk about them — early and often.

WhoWhatWhy was and continues to be the unquestioned world leader in investigating the 2013 Boston Marathon bombing. We provided copious evidence that authorities suppressed evidence that there was much more to the event — which rejuvenated the highly profitable “War on Terror” as 9/11 receded further and further into the distance — than two disgruntled emigre brothers. In 2016, our reports continued with studies of anomalies revealed by notes from the interrogation of Dzhokhar Tsarnaev and a bombshell discovery from his elder brother Tamerlan Tsarnaev’s immigration records.

If Ronald Reagan had died at the hands of his would-be assassin John Hinckley shortly after assuming office in 1981, Reagan’s VP and former nemesis George H.W. Bush would have become president. And here’s a weird and troubling “true fact” the media noticed but barely covered: Hinckley’s family and the Bushes were good friends. The government has to the present day prevented the particulars from coming out.

At the family dinner, Cousin Zeke announces that everyone knows who really did 9/11. Uncle Harry calls him a “Troofer” and rolls his eyes. But what actually can be unquestionably established about this seminal national controversy and — to many — abiding mystery? WhoWhatWhy, ever unafraid to tread, albeit responsibly, into difficult terrain, weighed what is certain.

Who isn’t fed up with those “trolls” who stink up the Internet experience for the rest of us? Shamelessly unethical and selfish, they immaturely seek to sink those they disagree with — or those who anger the companies and people who can pay their fee. We take a look at the clues to their presence — and the tricks and strategies that define and guide them.

Here’s a curious thing: Robert F. Kennedy was, according to the LA coroner, shot from the back at close range, just inches behind his ear. Yet Sirhan Sirhan, his purported assassin, was in front of him — and not so close. A close friend of RFK’s talked about his doubts, even as Sirhan was denied parole yet again.

In a Tough World, Sparks of Hope

Here are a few stories that fire the imagination and inspire hope. Something actually worked! Or came darned close.

Can Koch Brothers Block the Sun? An Experiment in Iowa

Notwithstanding efforts by the fossil fuel lobby to halt progress with solar energy, a small school district in Iowa demonstrated the possibilities of innovation and saved tens of thousands of dollars by relying on the sun.

A group of teen plaintiffs won a ruling in Washington State that required the state to produce a carbon  emissions reduction rule, signaling the possibilities of youth taking their own futures into their hands.

Muslims and Gays Unite Against Hate

All across America, Muslims not only condemned the Orlando gay nightclub massacre at the hands of a purported Muslim fanatic — they openly expressed support for the gay community.

Note: Credit for image sources appear on the link pages.