WhoWhatWhy has discovered that the FBI secretly flagged at least one of the “Boston Marathon bombers” as a terrorist threat in his immigration records, despite publicly denying it had done so.

This designation existed right up to the time the bombs went off at Boylston St. on April 15, 2013.

Tamerlan Tsarnaev’s heavily redacted immigration records, known as an A-file (alien file), were released in February under the Freedom of Information Act and posted online by US Citizenship and Immigration Services (USCIS). FOIA has a “frequently requested record” provision where multiple request for the same record triggers a “reading room” (posted online) treatment of the records. WhoWhatWhy was one of those requesters.

For context, it’s important to note that soon after the bombing, uncomfortable questions were raised by WhoWhatWhy when it became clear the FBI had long been aware of Tsarnaev. Even some of the mainstream outlets, which almost uniformly have accepted the government’s version of events, couldn’t ignore this reality.

The Bureau steadfastly maintains that it determined the elder Tsarnaev (who died in an altercation with police three days after the bombing) was not any kind of a national security threat. It also denies ever having asked him to be an informant.

And yet a shadowy program used by the feds to keep individuals deemed a “national security concern” from obtaining citizenship looks like the reason Tsarnaev’s naturalization application was held up — to the very moment of his death. This program is called the Controlled Application Review and Resolution Program (CARRP).

Significantly, CARRP is also used to manipulate foreign nationals (mostly Muslims) to do the FBI’s bidding by — ironically — flagging them as a “national security concern,” according to an extensive ACLU investigation into the program.

So, what is the significance of holding Tsarnaev’s naturalization application under CARRP?

It would mean that, by definition, the FBI had not ruled out whether Tsarnaev was a  “Known or Suspected Terrorist” (KST) by the time of the bombing.

A KST is a designation under CARRP automatically given to anyone listed on the terrorist “watch list,” which Tsarnaev most certainly was. A lower threat level, or “non-Known or Suspected Terrorist” (non-KST), can also be labeled a “national security concern” if certain “indicators” are present.

There’s also a good possibility that the FBI wasn’t worried about him at all. Instead a ”false” or trumped up KST designation and subsequent delay was used as leverage to get Tsarnaev to play some “informant” role. In FBI parlance, the word “informant” encompasses a wide range of roles — both official and unofficial — that an individual might be asked to perform.

The FBI, as a matter of policy, does not confirm or deny whether an applicant has been subjected to CARRP. And the Bureau almost never confirms or denies whether an individual was asked to become an informant.

Notably, however, the latter policy was ignored when it became patently obvious to observers that Tsarnaev fit the archetypal informant profile: young male Muslim, native speaker from a geopolitically important area, citizenship applicant, with minor legal troubles (which can provide even more leverage over a potential recruit). So, the FBI broke its own policy by explicitly denying they ever pushed him to be an informant.

There are two key documents in Tsarnaev’s A-file.

One is a “Naturalization Applications Routing Slip.” This is an internal routing sheet used to track the movement of files through USCIS.

The other is a copy of an e-mail from USCIS’s Fraud Detection & National Security (FDNS) Directorate instructing an Immigration Services Officer. It instructs the officer to “de-schedule and place in suspense” Tsarnaev’s naturalization application.

Both documents use the CARRP acronym. Taken together, it’s clear that Tsarnaev’s application was routed through FDNS which is where it goes when CARRP is in effect. 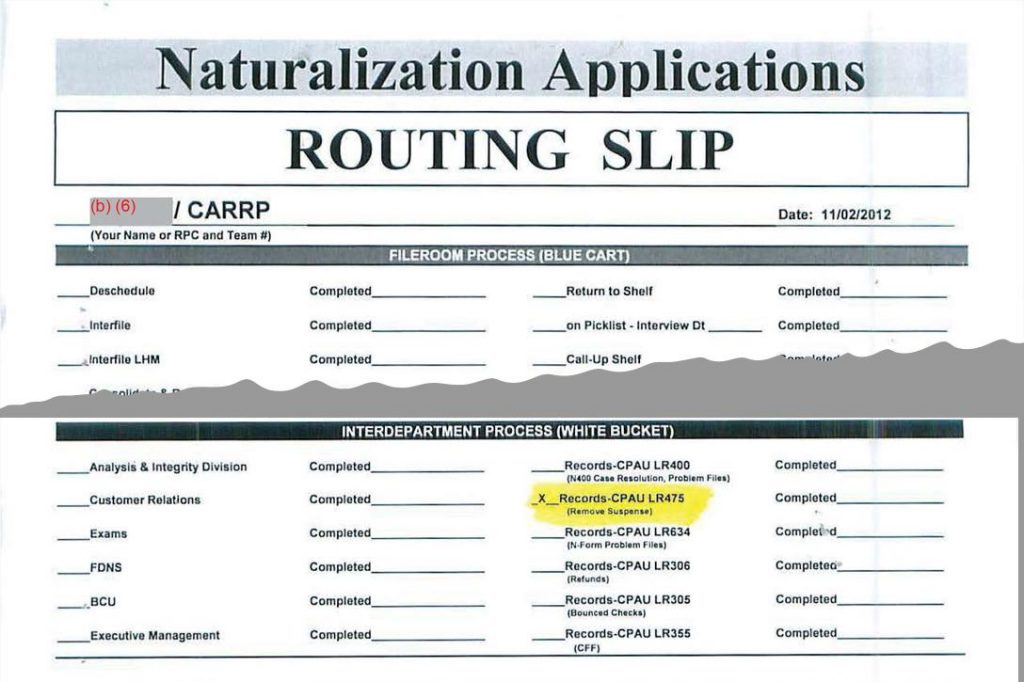 Former FBI Special Agent Mike German told WhoWhatWhy that “the CARRP references in the files are pretty good evidence that CARRP played a role in delaying action on his application.”

There’s another red flag. Despite completing all the requirements and passing his citizenship test January 23, 2013, Tsarnaev’s naturalization approval was put on hold. According to the ACLU, that is a solid indicator an individual has been “CARRP’d.”

The author of ACLU’s report on CARRP, attorney Jennie Pasquarella, told WhoWhatWhy: “That is typical in CARRP cases.” Although the mandated interview and test are conducted, the  agency only notifies the applicant that it “cannot make a decision at this time.” That is because the policy forbids USCIS to grant citizenship — even to applicants who are otherwise “statutorily eligible” — as long as he or she has been flagged with the catchall “national security concern” by the FBI. 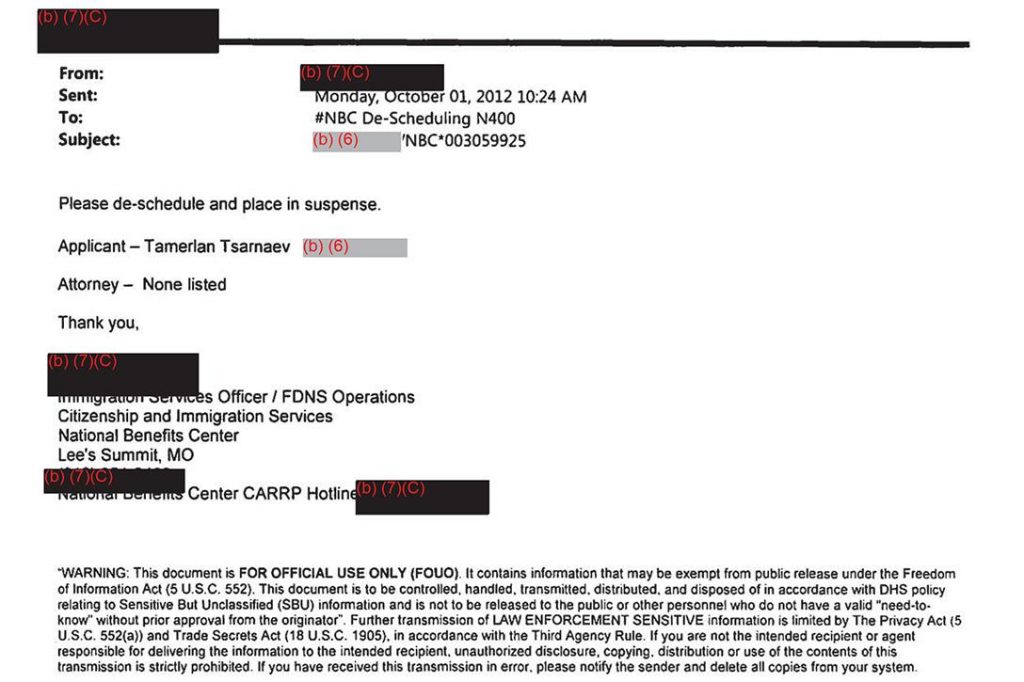 Ostensibly, CARRP is run by USCIS. In reality, the program has turned the decision to grant or deny citizenship, that is, “adjudication,” over to the FBI. In such cases, USCIS officers have to follow FBI direction on whether to deny, approve, or “hold in abeyance (potentially indefinitely)” an application, according to Pasquarella’s detailed report.

Another red flag indicative of CARRP is whether “the application was denied on specious grounds that appear pretextual.”

Indeed, we now know that the “official” reason for holding up Tsarnaev’s application — “waiting for records” — is false.

The Boston Globe’s Maria Sacchetti, the first reporter to comb through Tsarnaev’s A-file, noted that, “Earlier, a federal report [the Inspector General report on intelligence failures that allowed Tsarnaev to slip through the cracks] had said that Tsarnaev’s citizenship application was delayed because the government did not have his criminal court records from the 2009 case.”

Not so. As Sacchetti confirmed with Homeland Security (USCIS’s parent agency), Tsarnaev had already furnished those records to his immigration officer.

The “official” reason for delay has now been tweaked from “waiting for records” to “pending a supervisor’s review,” according to what Homeland Security told Sacchetti.

This kind of “moving the goalpost” matches the type of chicanery detailed in ACLU’s investigation.

The IGs who wrote the “intelligence failures” report included a footnote that complained about stonewalling by the FBI, suggesting they were either misinformed or misled about why Tsarnaev’s A-file was on hold. Similarly, WhoWhatWhy wrote previously of a widespread and growing frustration in the inspector general community over stonewalling by the very agencies they are tasked with overseeing.

“They Were Controlling His Every Step”

Evidence that Tsarnaev was “CARRP’d” right up to the time of his death adds to the list of contradictions between what the Bureau says publicly about Tsarnaev — and what the record suggests was actually going on with this enigmatic young man.

The FBI put out a press release later that day confirming the mother’s report of previous contact.

(2) Then, having admitted it conducted a six-month long “assessment” of Tsarnaev — two years before the bombing — the FBI said the investigation was closed after it “found no link or ‘nexus’ to terrorism.”

Contradicting that statement, both the FBI and CIA had actually put Tsarnaev’s name on the terrorist “watch list,” stating that he “may be armed and dangerous” and that screening him is “mandatory” if he attempts to board an airplane.

(3) The FBI initially claimed Tamerlan Tsarnaev was first brought to its attention by a March 2011 tip from the Russian government, which alleged he was an adherent “of radical Islam and that [he] was preparing to travel to Russia to join unspecified ‘bandit underground groups’ in Dagestan and Chechnya.”

And yet, two months after the bombing FBI director Robert Mueller admitted in Congressional testimony that Tsarnaev’s name was known to the FBI before Russia’s 2011 warning. Mueller testified that Tamerlan’s name came up in connection with other individuals under investigation.  (Please see WhoWhatWhy’s earlier discoveries on this issue.)

To sum up, the FBI maintains that after conducting its own assessment of Tamerlan, it dismissed Russia’s detailed warning as being “without merit.”

Six months later, however, Tamerlan did just what the Russians said he would do.

He flew to Dagestan by way of Moscow and made theatrical attempts to hook up with underground bandit groups — attempts that may have been real, or contrived as part of some international “sting” operation for which Tsarnaev may have been recruited. Even more problematic, neither government did anything to impede his travel, despite the flag-raising warnings about him on record.

The FBI’s own trail of contradictory statements and backpedaling suggests it has something to hide about its dealings with an alleged perpetrator of a deadly terrorist attack on American soil.

In muddying the record, was the FBI merely trying to cover up its dangerous incompetence, or is there a darker secret to be “protected” from public scrutiny — a scenario in which Tamerlan operated under some kind of government cover until something went horribly wrong?

If so, this would not be the first time that a cover up was the preferred option for America’s security apparatus.