WhoWhatWhy exists in good part to serve as a kind of reality check. Its goal is to step outside the echo chamber, in which, no matter how improbable the “official” story, the media and the public reflexively accept it.

WhoWhatWhy exists to remind us that the powerful — whether corporations or presidents or national security agencies — often exaggerate, cherry-pick facts, and even construct total falsehoods in service of their agenda.

We see that again and again, with Vietnam, with Watergate, with Iraq, with the claimed reasons for invading Afghanistan, Libya and, through surrogates, Syria.

The examples are legion. Each time the propaganda machine comes up with a new story, our society’s default response is to accept it. And the bigger the story, the harder it is for people to imagine they are being lied to.  And the more discomfort it causes, the more cognitive dissonance kicks in. Then we rally around the flag — and lash out at the skeptics.

Most recently, we encountered this with the Boston Marathon Bombing case, where so much doesn’t add up, but few seem to care.

An earlier case, which comes to mind now because this is its fifth anniversary, was the May 2, 2011, raid on a compound in Abbottabad, Pakistan. On that occasion, we were told, the United States avenged the greatest terrorist attack ever on its soil, when U.S. special forces swooped into an allied foreign country and successfully killed the No. 1 archvillain of our time — Osama bin Laden.

While the full range of media organizations, mainstream and “alternative,” accepted the government’s account, within hours of the raid, we began raising questions — and we have kept on doing so. You can read those early articles here:

•  Demanding the Evidence on Abbottabad: Even the Media Establishment is Wary

The basic story, which changed repeatedly in the early hours and days following the raid, finally settled into a few bare bones. And that is all the public remembers:

Relying on uncertain intelligence, President Obama made the risky decision to mount a raid into Pakistan without the consent or knowledge of the authorities there. Navy SEALs swooped in, killed bin Laden, and got out safely, after which bin Laden’s body was cleaned in accordance with Islamic law before being dumped in the Arabian Sea.

First, let us recall that Osama bin Laden was not only a Saudi, but from one of the kingdom’s most powerful, connected, protected families.

Since that raid, new information has emerged about the U.S. protecting Saudi elites, even to the extent of covering up evidence of Saudi complicity with the 9/11 attacks. But the growing body of evidence that the Saudis have not been America’s friends, and that they worked closely with Al-Qaeda, has never been squared with the story of the Abbottabad raid.

In that raid, we are told, the U.S. government relied on guidance from the Saudis as to what to do with Bin Laden and his body. This, we were told, was to avoid creating a shrine to Osama while also respecting Muslim customs — an odd claim given that such considerations never seem to have entered the picture in any other situation. Moreover, it would not have been so difficult to bury his body in an undisclosed location. 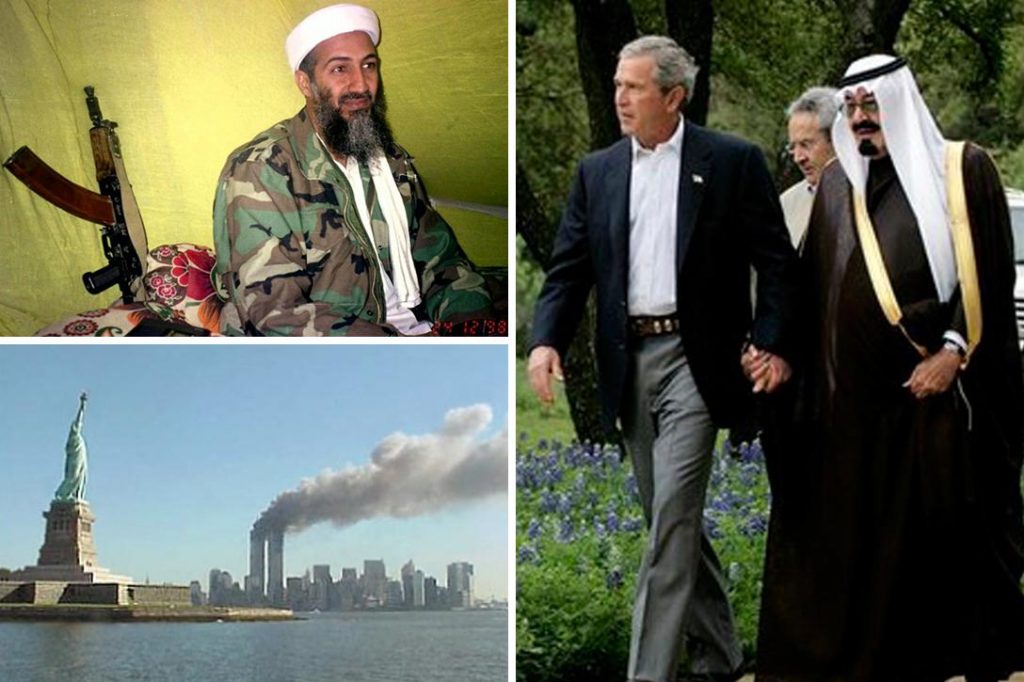 As we seek to connect the dots between these related parties and events, we cannot help but tote up some of the key factors in the Abbottabad story. We ask that you consider certain elements:

(1) The story of the raid changed over the course of several days, even though the commanders and those officials providing the narrative here at home had been in steady contact.

(2)  Instead of presenting pictures of the corpse, as was done with Saddam, Qaddafi and most other “villains”, the U.S. government opted not to show it.

(3)  Instead of keeping the body at an undisclosed location for comprehensive, DNA, and other identification measures, the U.S. government claims they hastily tossed his body into the ocean — after, we are told, advice to do so came from….the Saudi government.

(4)  The photos we saw of the man purported to be living in that Abbottabad villa look strikingly different from prior photos of him. 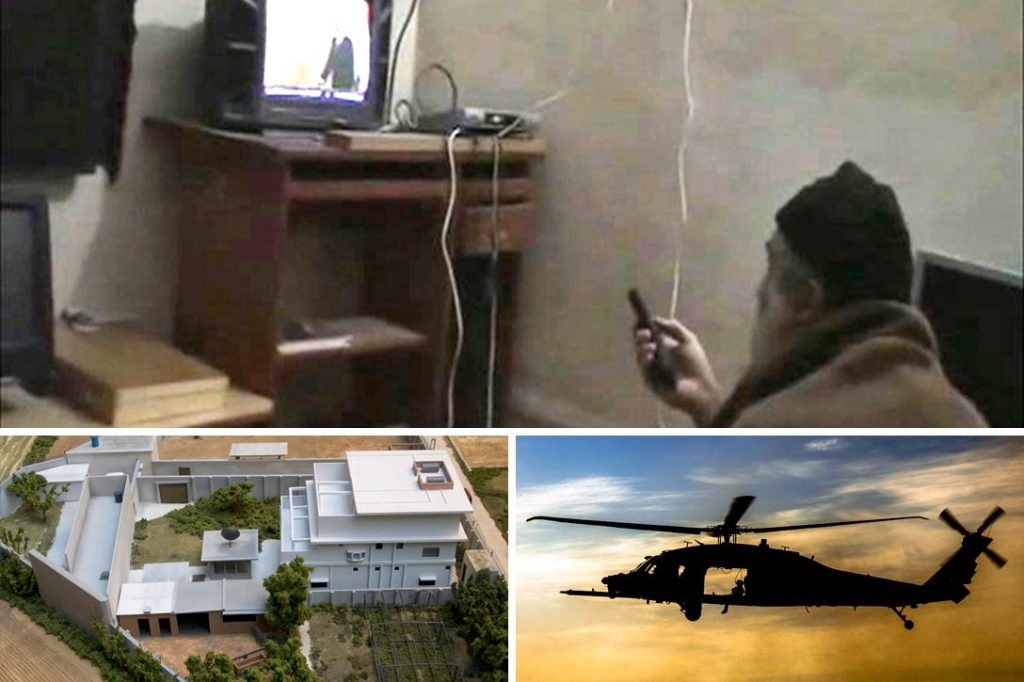 (5)  Just before the SEALs charged up the stairs toward the man who would be killed, they experienced a wardrobe malfunction — the transmission from their helmet cams suddenly stopped feeding into the White House Situation Room. So the president and his team actually saw nothing.

(6)  When bin Laden purportedly died at 1 a.m. Pakistan local time on May 2, 2011, almost none of the Navy SEALs conducting the operation actually saw him.

(7) Former SEAL Mark Owen’s book “No Easy Day,” which received a lot of attention and became the definitive inside account of what took place, was reportedly frowned upon by the military — yet the military, which could have easily halted the publication if it wished to do so, did not.

(8)  We have been told that the SEALs themselves had been given the choice of whether to capture bin Laden or to kill him.

(9)  Consider the incalculable intelligence value of an Osama captured alive.

(10) During the operation, one of two helicopters crashed into a wall in Osama’s compound and was essentially destroyed — yet we are told that every one of the inhabitants walked away without serious injury.

(11)  A neighbor reportedly saw the crash and claimed no one emerged.

(12)  Shortly after this debacle, another contingent of Navy SEALs perished in what we were told was an unrelated crash across the border in Afghanistan.

(13)  We have heard no more of bin Laden’s wives and others who purportedly survived the raid. What happened to them? Were they punished? Were they interrogated? Were they remanded to Saudi custody?

(14)  Consider what a tremendous publicity coup this was — for President Obama, who was preparing for his re-election bid, for the military and for the CIA. From the simple vantage point of wishful thinking, there was no reason for Obama or his ambitious Secretary of State Hillary Clinton to doubt or express doubts about this heroic achievement they were told had come on their watch.

Is it madness to exhibit skepticism, to ask that we be shown some kind of proof by a government that clearly cannot be trusted to level with us on matters of “national security?”

On this fifth anniversary of this extraordinary event, we pause to note how, as in so many situations, the great majority of the media — from the corporate, mainstream entities to the ideologically-driven organs of Left and Right — accept at face value the official story.

In the years since, the only significant voice to question the official story is Pulitzer Prize-winning investigative journalist Seymour Hersh.

Hersh maintains another version, as told to him by a retired senior U.S. intelligence official who goes unnamed. As Hersh heard it, the Saudis were working with the Pakistanis to hide bin Laden, and were “financing (his) upkeep since his seizure by the Pakistanis.”  Further, according to another anonymous Hersh source, the U.S. chose to execute bin Laden rather than capture him as a war criminal.

Hersh’s interpretation, for which he has faced harsh criticism, is an interesting one. Nonetheless, it does not adequately address the questions we have posed, primarily because it accepts that the person in the compound was indeed bin Laden, and that this person was indeed killed. We’ll withhold judgment on that until we see real evidence.

Why? Because there are two scenarios.

In one, Osama was the wayward child, a rebel against his parent country, a man whom the U.S. and Saudis wanted obliterated. In 1994, he was expelled from Saudi Arabia.

But in the other, Osama bin Laden played a valuable role for the Saudi royal family, keeping the war away from its own borders, focusing fundamentalist anger on the West. And because Osama bin Laden gave the always-hungry Western war machine the replacement villain for the Soviet “evil empire” — a casus belli that necessitates never-ending combat and never-ending and incalculable spending and riches for the military-industrial complex.

Obama’s counterterrorism advisor at the time of the raid, John Brennan, had been CIA station chief in Saudi Arabia just before 9/11 — and subsequent to the raid was made CIA director.

For so many, Osama seemed to be the gift that kept on giving.

Is it possible that he would not, in the end, be punished? That he would instead be protected, perhaps given a new identity like much lesser pawns in the games of power that nations and other entities play?

It may sound far-fetched. But in light of the unanswered questions about May 2, 2011, good journalism — indeed sound mental health — dictates that we not dismiss logical scenarios in favor of fundamentally illogical ones simply because we are told to do so.

Editor’s Note: An earlier version of this story said the SEAL who wrote “No Easy Day” admitted that he did not see the body of bin Laden. That was incorrect. We would like to thank reader TomS for pointing this out to us and regret the error.