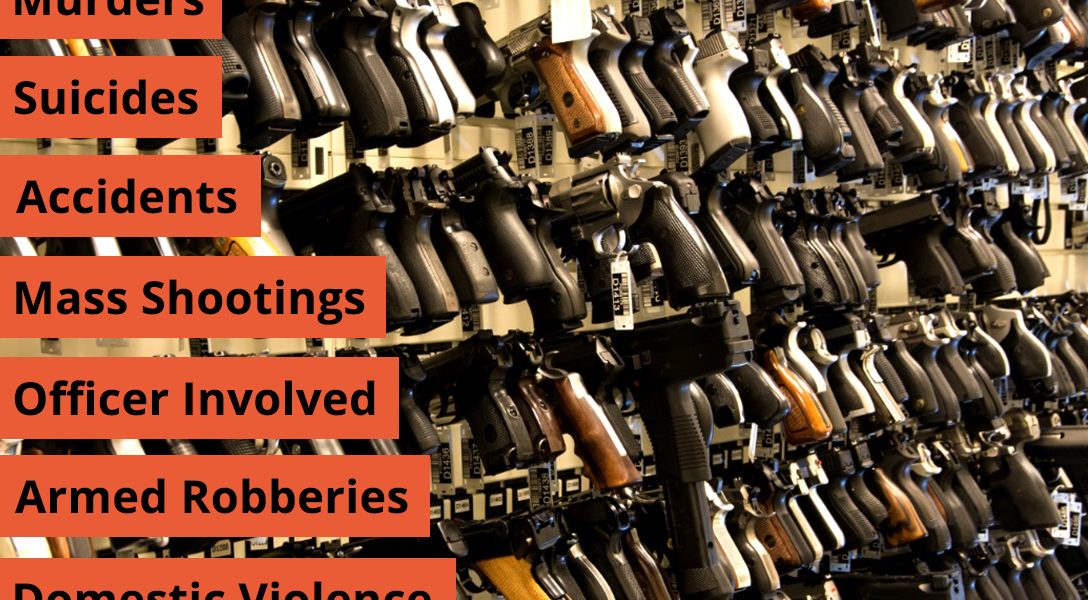 June 7 has been deemed “National Gun Violence Awareness Day” by the American Public Health Association. But to some — especially those who have lost loved ones to guns, or who fear losing a loved one, or who fear for their own lives — every day in America is gun violence awareness day.

You never know where a bullet will come from. A deeply disturbed fellow student or colleague? An angry in-law? A nut filled with impotent rage at your politics, race, or religion? A policeman who thinks the cell phone in your hand is a gun? A child who has found a gun in his mother’s purse?

Below, we present links to seven WhoWhatWhy stories that focus on key aspects of this complex and confounding issue. Attendees of the World Peace and Unification Sanctuary ministry in rural Newfoundland, PA, brought their assault rifles to church for a blessing of the semi-automatic weapons. Photo credit: Joe Evans

What Can a Gun-Toting Church Tells Us About Conservatives?

It’s hard to imagine, but AR-15s — assault weapons, the weapon of choice for mass shooters  — were actually blessed at a rural church in Newfoundland, PA. The blessing was part of a mass wedding ceremony, held at the World Peace and Unification Sanctuary Ministry, presided over by Rev. Hyung Jin (Sean) Moon, son of the right-wing Rev. Sun Myung Moon.

Holding a gold-plated assault rifle in his hand, Rev. Moon declared, “Each of these couples have the right of sovereignty, to keep and bear arms and to protect the earth from communists and political satanists.” Then, in front of a crowd sporting their own “rods of iron” (the so-called Biblical term for rifles), he wed the seven couples on stage. No ‘Insanity Defense’ for US Obsession with Guns

The NRA had nothing to say about the nine people gunned down in a South Carolina church. But one of the group’s board members was happy to be its verbal hitman. Charles L. Cotton blamed the deaths on the pastor, Clem Pinckney, who also served as a state legislator. Cotton said of him:

And he voted against concealed-carry. Eight of his church members who might be alive if he had expressly allowed members to carry handguns in church are dead. Innocent people died because of his position on a political issue.

The media dwelled more on the human anguish than the avoidable cause, featuring the astounding forgiveness of some of the victims’ families toward the perpetrator. As he frequently did, President Barack Obama spoke up boldly on the need to “do something” about the bloody madness that is America on a daily basis, but, as he also frequently did, conceded he could do nothing… Can School Shooters Be Profiled and Shootings Averted?

What about all the school shootings that have been averted? With new investigative research, and an emphasis on prevention and collaboration, we are now in a better position to understand school violence from the perspective of school personnel who have actually headed off deadly shootings. So says Dr. Jeff Daniels, a professor at the University of West Virginia, who has been working to identify pre-attack behavior. His team has studied 37 school shootings, involving 41 attackers.

In a WhoWhatWhy podcast he talks with Jeff Schechtman about some of his findings. They include the fact that attacks were rarely sudden. Attackers always seemed to go through a similar process in the weeks and months leading up to a shooting. In many cases, other people knew about the attacker’s mind-set, but too often they did not share their concerns because the negative connotation of “snitching” came into play.

In the end, what a shooter did and said leading up to the attack seemed to be a more precise predictor than any long-term personal history. Often, the shooters came from intact families, but some came from broken homes. Some had difficulty coping with significant losses or personal failures. Many felt bullied or persecuted and had considered or attempted suicide… The name for this new tactic is “nullification,” and the localities that are practicing it are calling themselves “Second Amendment sanctuaries” — a tactic that was partly inspired by efforts to establish immigration and marijuana sanctuaries.

In some cases, county sheriffs have publicly said they will not enforce the new laws. This has happened in at least six states: Nevada, New Mexico, Washington, Colorado, Oregon, and Illinois. In Washington, sheriffs in more than half of the counties have refused to enforce new gun regulations. One, Bob Songer of Klickitat County, has gone even further — saying he might prevent state and federal police from enforcing them. In Nevada, one sheriff who recently refused to enforce a new gun law wrote a letter to the governor likening the measure to Hitler’s gun policies…. Something’s wrong with your uncle across the street. He’s always been a strange guy, but he’s been acting more strangely than usual since he lost his job last month. He’s been drinking a lot more too. He sits around all day, drinking Genny Light, and watching TV when he’s not blasting up the backyard with his 12 gauge. He’s been banned from the local bar, which is a rare distinction to achieve. Your aunt is so afraid of him that she and her kids just moved in with you. She’s terrified he’s going to hurt himself or someone else. Thing is, so far he hasn’t done anything illegal: He hasn’t made any direct threats, or brandished his guns in public, or assaulted anyone.

If you live in a state that has red flag laws, formally known as Extreme Risk Protection Orders or, in some states, as Gun Violence Restraining Orders, your aunt can petition to have your uncle’s guns taken away for a period of time (for weeks, months, or up to a year, depending on the state)… America’s Culture of Killing: It Doesn’t Begin at Home

What if the problem of violence in America is not just the availability of guns, but a strain in US culture that accepts violence and even homicide as a “legitimate” way of solving problems?  According to philosopher, cultural critic and author Laurie Calhoun, Americans seem to consider violence an acceptable form of persuasion.

In this podcast with WhoWhatWhy’s Jeff Schechtman, Calhoun questions some basic assumptions of US foreign policy. When our leaders say “all options are on the table,” with an emphasis on the use of force as a “last resort,” are we really just setting up an excuse for our inability to persuade others see our point of view? And is it just one more step then, to using killing as a means of avenging even legitimate grievances?

In articulating her long-held views on drone warfare and targeted killing, Calhoun compares the way we’ve been using drones, even in the Obama administration, to the way terrorists used planes on 9/11. While filming a music video, country singer Justin Carter — who kept a loaded gun in his pocket as a prop — died when that gun “went off” and hit him in the corner of his eye. And earlier this year, a 16-year-old girl somehow shot herself at a gun club in Iowa.

So far this year, there have been 338 unintentional shooting “incidents” resulting in injury or death, according to the the Gun Violence Archive. [There were 338 as of March 28, the date of the article; today, it is 623.]  That archive — a grimly fascinating place — shows all gun-involved incidents in the US, from 2014 to the present…