What Can a Gun-Toting Church Tell Us About Conservatives? - WhoWhatWhy
Reading Time: 8 minutes

The story of a Pennsylvania church blessing AR-15s made the rounds on traditional and social media last week. The ceremony at the World Peace and Unification Sanctuary ministry in rural Newfoundland, PA, was widely ridiculed as bizarre and out of touch, but once you take away some of the theatrics, how different are these worshippers really from millions of Americans and the NRA?

The answer, it turns out, is not that much.

WhoWhatWhy went to Newfoundland twice last week, attended the gun-blessing ceremony and saw some things that the rest of the media seems to have missed.

First, it is interesting that this event took place in Pennsylvania. Exactly 10 years ago, presidential candidate Barack Obama told a private gathering in the Keystone State that parts of its residents were “bitter.” He added that it is not surprising that rural Pennsylvanians “cling to their guns, or religion, or antipathy to people who aren’t like them or anti-immigrant or anti-trade sentiment as a way to explain their frustrations.”

Obama took a lot of heat when the comments leaked. In hindsight, however, he basically pinpointed the sentiment that made Donald Trump his successor — and that was on display at the Newfoundland church.

The response to Obama’s remark was so dramatic that he was forced to publicly defend himself during a CNN town hall and, predictably, the GOP used his words as a talking point for years, tossing it as red meat to a base that’s fueled by weapons-toting, faith-based voters.

Even four years later, vice-presidential candidate Paul Ryan made mention of the remarks during campaign rallies.

Anybody witnessing the AR-15 blessing ceremony at the World Peace and Unification Sanctuary ministry in the wake of the tragic school shooting in Parkland, FL, would have a hard time walking away with a different conclusion from Obama’s.

While the group’s beliefs may seem extreme to most, they are not as uncommon as one might think. 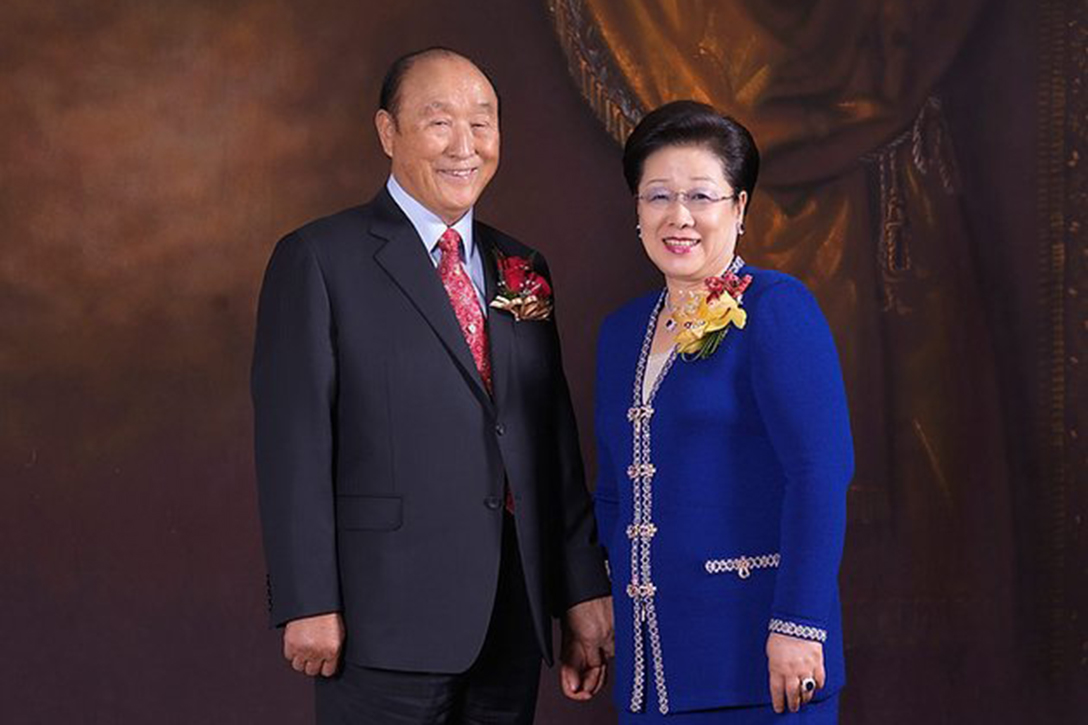 The church’s interior was comprised of plain, white walls and a beige-colored carpet. The only indication that something was out of the ordinary, besides that gold-plated rifle, were the crowns each man, woman, and child wore.

The church’s exterior also portrays no sign of anything odd. It’s the type of building neighbors might drive by every day on their way to and from work and never give a second thought to.

Rev. Moon preached to his congregation, only looking up from his scripture to make eye contact with the handful of brides and grooms on stage. He spoke in a moderate, steady tone, never raising his voice above a normal, conversational volume.

The church’s congregants stood stone-faced and silent, only speaking or making noise when prompted, such as during the reading of the wedding vows, when the crowd shouted “yes!” as a group in response to each vow.

Near the end of the ceremony, Rev. Moon directed those who attended to turn toward the camera — which was live-streaming and recording the ceremony to be posted in full later online — to wave and bow.

“New couples become royalty, kings and queens with crowns and rods of iron.” Rev. Moon declared. “Rod of iron” is the Biblical term (Revelation 2:26-27) the church uses for guns like the AR-15.

“Each of these couples have the right of sovereignty, to keep and bear arms and to protect the earth from communists and political satanists.” Rev. Moon said. Then, in front of a crowd sporting their own “rods of iron,” he wed the seven couples on stage.

From the outside looking in, the group seemed like a gun-crazed cult — a bunch of unhinged, well-armed loonies. And that’s how they were portrayed in the media: As a group of bizarre outliers.

But how different are their beliefs from, for example, those of the NRA?

Wayne LaPierre, the NRA’s executive vice president, took the stage at CPAC in the same week and told the appreciative crowd that the right to bear arms is not “bestowed by man, but granted by God to all Americans as our American birthright.”

In the same speech, he also said that the best way to stop a bad guy with a gun was a good guy with a gun. This stance for him isn’t new, it’s a long-held NRA talking point.

According to a Pew Research Center study, the views of World Peace and Unification Sanctuary members strongly align with the views of most Republicans around the country.

As of April 2017, 74 percent of gun owners associated their right to own guns with their own sense of personal freedom, and 64 percent said they have those guns for personal protection.

The church certainly agrees with them. Sean Moon preaches that the AR-15 is a god-given tool “to defend your wife from those seeking to rape and pillage your family.”

This is a slight change from his father’s original ideas, since the original Rev. Moon never specifically equated AR-15s with rods of iron, although he did teach personal protection.

The grim statistics on self-defense with guns haven’t stopped the church from emphasizing gun-based self-defense in its doctrine.

The church hopes to take its mission overseas, bringing gun rights to nations all over the globe, aiming to liberate the people from what the church calls “tyrannical governments.”

This is a stance that permeates deep into the GOP’s and NRA’s policy points.

LaPierre called those who advocated tighter gun laws after the shooting in Florida freedom-hating “European-style” socialists, a label often given to Obama during his presidency. The NRA leader also accused gun-control activists of being tragedy opportunists looking to take guns away and repress people’s rights, claiming “They hate the NRA. They hate the second amendment. They hate individual freedom.”

Claims by gun rights groups that law-abiding citizens would be rounded up and disarmed are part of why gun sales soared while Obama was in the White House.

The similarities don’t stop at guns, however: the church and the right agree when it comes to LGBTQ+ issues as well.

Being a Christian-based religious group, the World Peace and Unification Sanctuary ministry only recognize marriage between men and women, even to the extent that the Southern Poverty Law Center called them “an anti-LGBT sect.”

On these issues, they’re also not as far out on a limb as one might believe.

According to Pew, only 40 percent of Republicans approve of same-sex marriage, compared to 73 percent of Democrats and 70 percent of independents.

As of 2016, only 26 percent of self-identified conservatives approved of same-sex marriage; that spiked up to 41 percent when they were asked the same question in 2017. As of 2017, only 35 percent of white evangelicals, the same group that overwhelmingly voted for Trump, favored same sex-marriage.

For those who found it odd to see guns in churches, they really shouldn’t have been as flabbergasted as they were.

Not a single state has laws on the books that forbid concealed carry weapons in church.

All across the country, people have brought their guns to Sunday service as concealed-carry weapons. They may not have talked about it, but it’s well within their rights to do so. Some states allow individual pastors to decide whether they’ll permit their congregation to come to service with weapons.

The Sanctuary Church is just the next logical step. If you can bring your handguns to church, why not bring along your semi-automatic assault rifle as well?

Thankfully, the church knows exactly where to get a firearm when they need one. Sean Moon’s older brother Moon is the president of Kahr Firearms, a gun manufacturing company based in Greeley, PA.

Justin remarked at the Feb. 24, 2018, “Thank You President Trump Dinner,” of which Kahr Arms was a sponsor, that if Hillary Clinton had been elected president in the 2016 election she would “round patriots up and put them in FEMA death camps.” 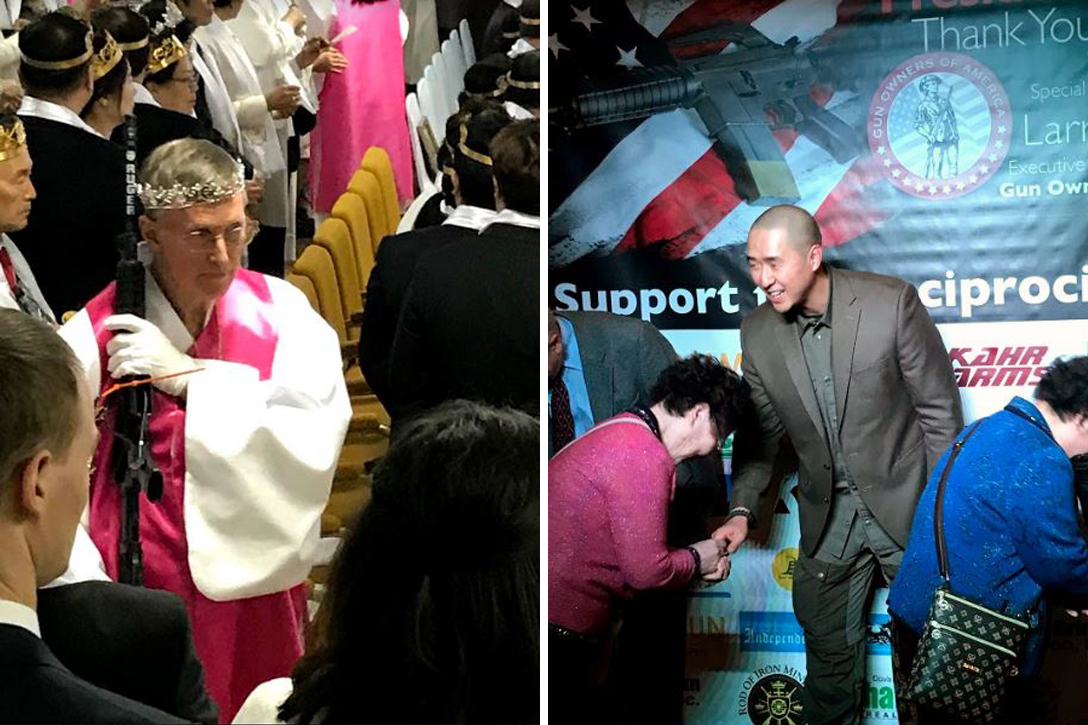 Right: An attendee of the World Peace and Unification Sanctuary ministry AR-15 blessing ceremony in his robes, crown, and holding his “rod of iron.” Left: Rev. Hyung Jin Moon greets the guests of the Feb. 24 “Thank You President Trump” dinner with a handshake and a bow. Photo credit: Courtesy of Joe Evans

The church seems to fall in line with conspiracy theorists like Alex Jones when it comes to dreaming up outlandish schemes their political opponents have put in motion.

Jones is infamous for his claims about FEMA death camps and crisis actors at school shootings like Sandy Hook and Marjory Stoneman Douglas High School. He and others like him were brought to the mainstream of the Republican party with Trump’s acceptance and parroting of their ideas for years, such as birtherism.

The event featured keynote speaker Larry Pratt of Gun Owners of America, who told the crowd GOA opposed any form of background checks, calling them a waste of money and unconstitutional. Pratt also accused Broward County Sheriff Scott Israel of receiving financial incentives for not reporting student crime, saying “These guys realize there’s more money if the bodies pile up.”

In documentation the church provided WhoWhatWhy, they laid out a new constitution that “restores the government to its proper role as servant of the people, originally intended by our Founders. A constitution for a nation based on the Christian principles of freedom, faith, and family.”

The church calls it The Constitution of the United States of Cheon Il Guk. 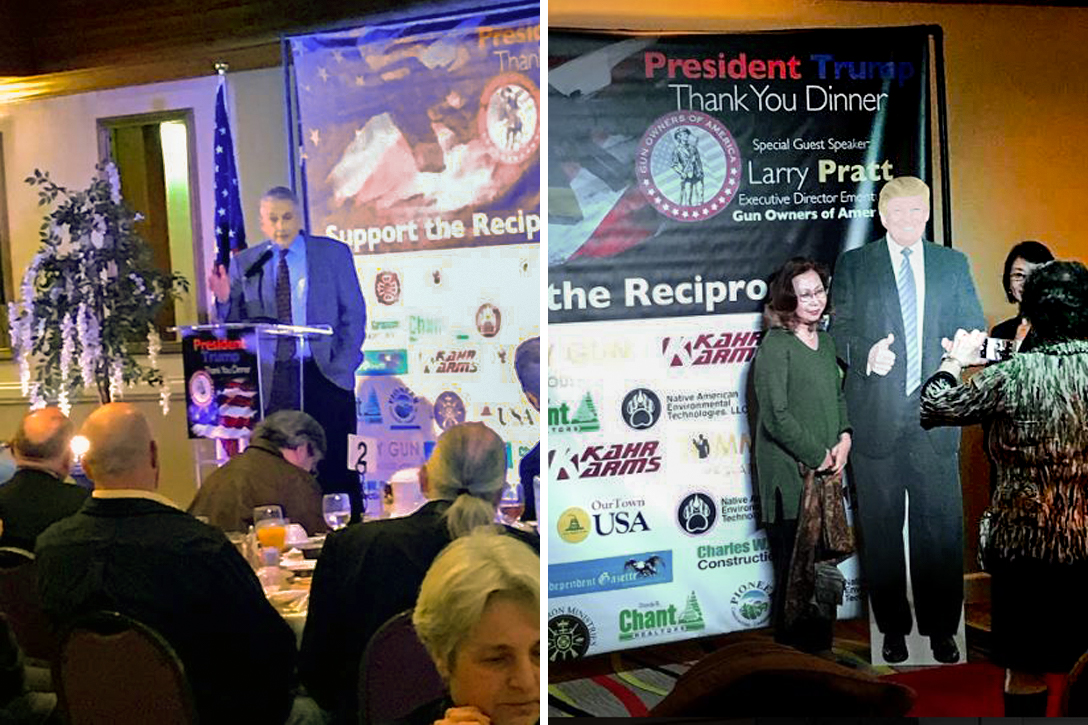 Left: Larry Pratt, executive director of Gun Owners of America, speaks to attendees of the “Thank You President Trump” dinner on Feb. 24, 2018. Right: Guests at the dinner pose with a Trump cut-out placed by the entrance. Photo credit: Courtesy of Joe Evans

There may not be any polling specifically on that plan, but there is a good chance it would do very well among conservatives. The church believes this new constitution is needed due to “the elimination of prayer in schools, the removal of the Ten Commandments in public spaces, the murder of children by abortion, [and] the legalization of gay marriage,” all of which they believe are “grave offenses committed against God.”

The Sanctuary Church is no different.

When asked for comment about the proposed changes to the required age to purchase a firearm, Noll said the church believed it was a states’ rights issue, another point where the GOP and the church agree.

WhoWhatWhy reached out to the church following the event to get its comments on the White House meeting on guns held on the same day as the blessing. Trump, to the astonishment of Republicans, suggested that he would back the seizure of guns without due process and also supported other gun control measures usually backed by Democrats. The church has not yet responded.

If they give the president a pass for advocating a reversal of what they claim to stand for, they would have one more thing in common with other conservatives. 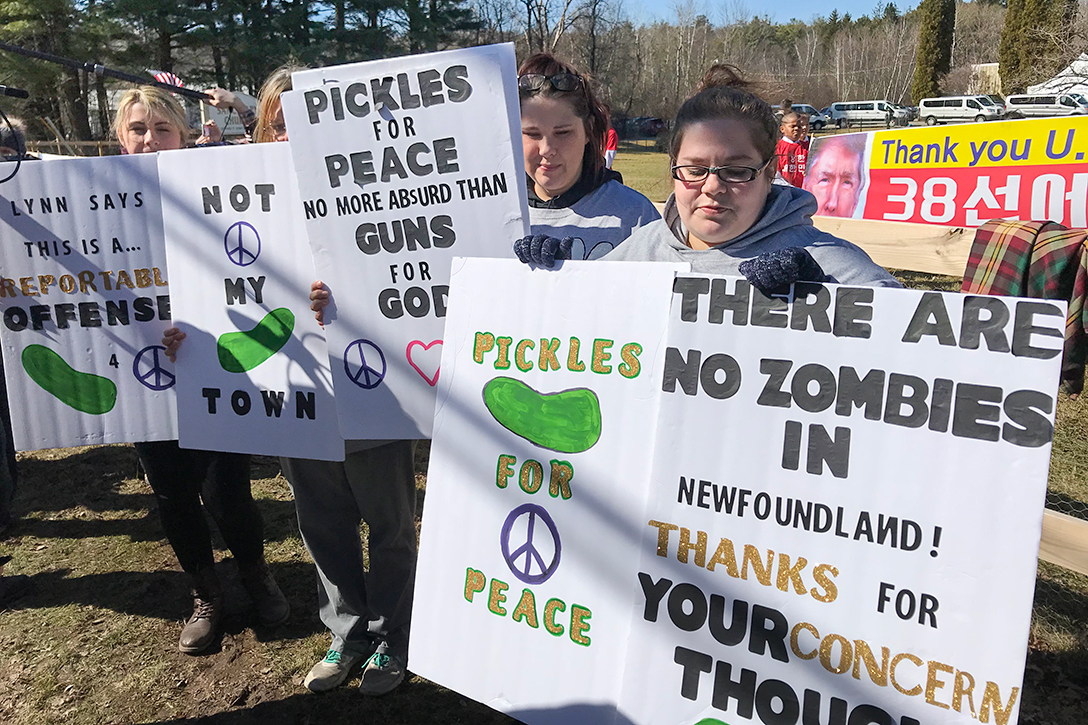 11 responses to “What Can a Gun-Toting Church Tell Us About Conservatives?”