Able to fire 25 rounds per second, and with a standard drum magazine of fifty .45-caliber rounds, the Thompson submachine gun, or tommy gun, was the weapon of choice for gangsters of the Prohibition era. From 1921 through 1934, it was possible in many states to walk into a well-stocked gun store, put down cash, and walk out with several of them, legally, and with no questions asked.

One state where this was possible was Illinois, where Al Capone bought three Thompsons in a hardware store in February 1926. Two months later he and his goons used them to gun down another gangster, who was walking down the street with an assistant state’s attorney.

The death of that lawman by tommy gun inspired police action that eventually led to Capone’s undoing. But it would take several more years, and several more high-profile gangland slayings, such as the St. Valentine’s Day Massacre of 1929, to turn public opinion against machine guns for good.

So if you think the current brouhaha over gun violence is somehow unprecedented in American history, think again: Indeed, things could be worse. Americans today can’t walk into the nearest Walmart and check out with a fully automatic machine gun.

Not that the tommy-gun era lasted very long. By 1934, Americans had soured on the easy availability of military-grade firepower. The bloody consequences of gang warfare played a big part in this change, but so did the attempted assassination of President Franklin D. Roosevelt the previous year. Though Roosevelt was unhurt, Chicago Mayor Anton Cermak was killed, and four others were injured.

These events impelled Congress to pass the National Firearms Act of 1934. This marked a major shift for gun ownership in America, by setting up a strict regulatory process for an entire class of guns. The new classification included automatic weapons as well as grenade launchers, sawed-off shotguns, and certain accessories, such as silencers.

The bill, as originally written, would also have restricted handgun ownership. This provision, however, never made it through Congress, thanks in part to lobbying from the National Rifle Association.

How to Legally Buy a Machine Gun

What many Americans today may not realize is that this 1934 law, while heavily restricting ownership, did not ban machine guns entirely. As a result, it is still possible to legally own them.

The path to ownership, however, is a rigorous one. It requires that the applicant submit to fingerprinting and an extensive background check, obtain the signature of the local police authority (such as a sheriff or police chief), pay a tax of $200, and clear a number of other bureaucratic hurdles — all under the watchful eye of the Bureau of Alcohol, Tobacco, Firearms and Explosives (ATF).

The process, which can take up to a year, also entails having one’s name and firearm entered into a national registry, the first and only one of its kind in the US. Moreover, all sellers of machine guns must be licensed by the ATF, a process that’s even more arduous than the one described above. This 1934 law, then, isn’t just a relic of the past: It’s a current process that provides a window into an earlier era’s thinking about gun control.

One of the purposes of this act was to make it technically legal but financially impractical to own a machine gun: The $200 tax charged today is exactly what was charged in 1934 — the equivalent in 2019 dollars of $3,756.90. This was more than the annual income of the average worker that year. Clearly, the intention of the 1934 law was to make widespread legal ownership of machine guns highly unlikely. However, no additional legislation ever adjusted the tax rate for inflation, so it has remained at the level of the original levy, and by itself no longer serves as a deterrent to ownership.

The current price of machine guns, however, does act as such a deterrent. Even if you’re determined to go through this process, you first need to have the cash for the gun. And these things are expensive — from $10,000 to $50,000, or more. Moreover, there’s only a limited pool of machine guns to buy from, which pushes up the price. In 1986, Congress passed the Firearm Owners’ Protection Act, which, among other things, closed the door on civilian ownership of newly manufactured machine guns. Yet this law still allowed the purchase of machine guns made before May 19, 1986.

So, if you manage to clear all those hurdles — congratulations, you’ve got a machine gun. Understand, however, that this is nothing to be taken lightly. You and your gun are under continuing scrutiny from both ATF and local law enforcement. They know who you are, where you are, and exactly what kind of gun you’ve got. Furthermore, that gun needs to stay where it’s registered; if you want travel to another state with it (and this includes moving residence), you have to inform the ATF first. Failure to comply with this law can lead to 10 years in federal prison, a fine of up to $10,000, and permanent loss of one’s right to own guns.

The 1920s and the Original Semi-Automatic Gun Bans

The National Firearms Act wasn’t the only legislation that was passed as a result of public revulsion at widespread gun violence during Prohibition. In fact, several states beat the federal government to the punch, with West Virginia being the first to ban machine guns, in 1925. Other states would follow suit, until more than half had enacted such bans before the federal law was passed in 1934, according to Robert Spitzer, a political science professor at the State University of New York at Cortland, who has written five books on the history of gun laws in the US. 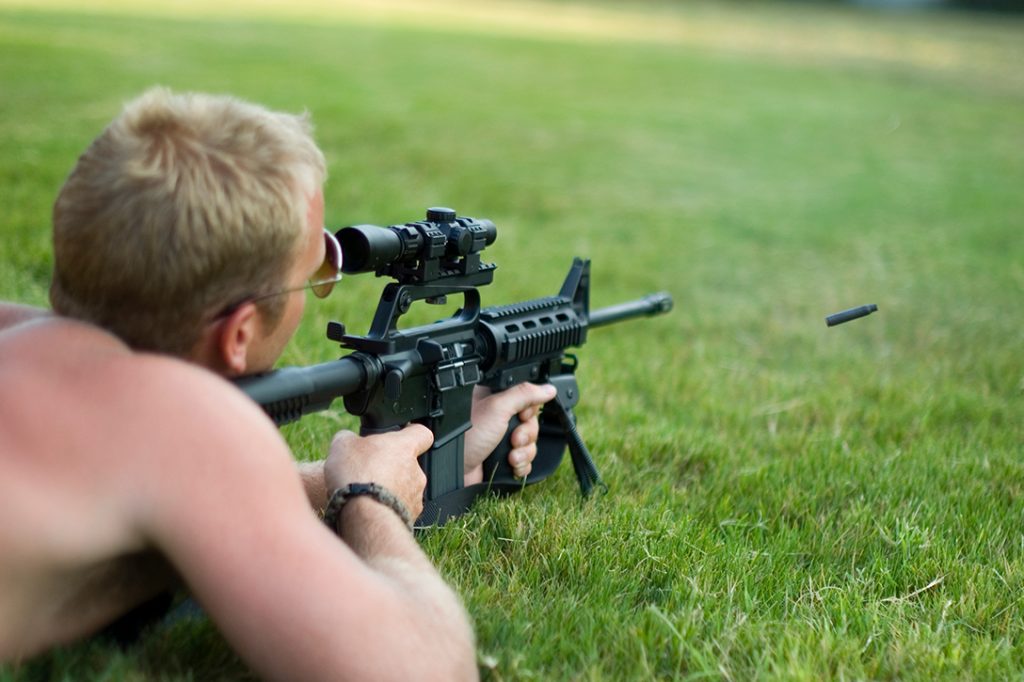 Several states went on to ban semi-automatic rifles as well. Spitzer, in his 2015 book, Guns Across America: Reconciling Gun Rules and Rights, points to laws he he discovered in seven states — Massachusetts, Michigan, Minnesota, Ohio, Rhode Island, South Dakota, and Virginia — that enacted such bans, either by including them in legislation banning machine guns, or by failing to distinguish between semi-automatic and fully automatic weapons. Three additional states (Illinois, Louisiana, and South Carolina) passed laws against machine guns that were ambiguous enough to potentially include semi-automatics.

“That comes as a surprise to most modern observers,” Spitzer told WhoWhatWhy. While semi-automatics weren’t entirely new at the time these laws were passed, they were still fairly uncommon: “It was technology that hadn’t really fed into the general population.”

The laws that banned semi-automatics are not merely a historical curiosity, Spitzer said, but are in fact germane to today’s proposals to ban assault weapons.

These laws, he said, “cast a bit of a shadow over the modern gun control debate because … as far as anyone knew up until [the 1980s], the government had never sought to regulate semi-automatics before, certainly not in this way.” But his research, which uncovered these early bans on semi-automatics, “does suggest that there is some precedent for restricting at least some kind of semi-automatic weapons.”

Yet these Prohibition-era laws never caught on. At some point, the bans in the 10 states mentioned above were either rescinded or weakened, a shift in public policy that was probably due, Spitzer thinks, to the rising popularity of semi-automatics following World War II.

Now, the place of semi-automatics in American society is again being debated, as the frequency and toll of indiscriminate mass shootings far eclipse the gang gun-battles of the Prohibition era.