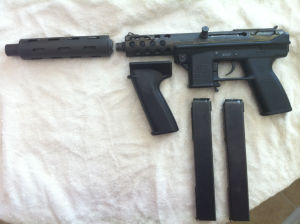 “I don’t believe that’s going to make one difference. There are so many different ways to evade that, even if you had that. You had that for 10 years when (Sen.) Dianne Feinstein passed that ban in ’94. It was on the books. Columbine occurred right in the middle of it – it didn’t make any difference.”

What was LaPierre talking about, and did what he said make sense?

In 1994, President Clinton signed Feinstein’s bill that banned the manufacture of additional semi-automatic weapons. It did not eliminate those already in use. Dylan Klebold, one of the two gunmen at the April 20, 1999, massacre at Columbine High School in Colorado, relied primarily on a 9 mm Intratec TEC-9 semi-automatic handgun, attached to a strap hung over his shoulder. To the casual eye, it looks like a short machine gun—and in fact, the original design was for a machine gun.

As the Denver Post reported some months after the Columbine attacks, “Klebold’s TEC-DC9 was made during the congressional debate by a Miami gun maker who tripled production to beat the ban – and called it his best year ever.”

So the gun LaPierre was referring to was manufactured before Feinstein’s bill even went into effect. On this count, his statement is highly misleading.

Furthermore, at Columbine, where 12 students and one teacher died and 24 others were injured, Klebold carried one 52-, one 32-, and one 28-round magazine. He fired the semi-automatic 55 times that day. Had he had smaller magazines, as suggested by Gregory to LaPierre, he would have had to stop to reload far more frequently, thereby stalling the onslaught, at least briefly, and gaining precious seconds for precious lives.

So LaPierre’s even raising the issue of Feinstein’s bill was a red herring—a distraction from the substance of what Gregory was saying. Thus, while it was true that Feinstein’s bill did not prevent the carnage at Columbine, the proposal Gregory was referring to…very likely would have.

Feinstein, whose original bill was allowed to lapse after a decade by Congress, is planning new legislation that will permit those who already own various semi-automatic-type weapons to keep or transfer them, but ban their manufacture, sale, transfer or ownership by anyone else. It will also ban weapons that can accept the sort of detachable magazines Klebold used in Columbine, as well as handguns holding more than 10 rounds.

LaPierre and the NRA will almost certainly oppose the legislation.

There are 48 comments Our Comment Policy: Keep it civilized, keep it relevant, keep it clear, keep it short. Please do not post links or promotional material. We reserve the right to edit and to delete comments where necessary.