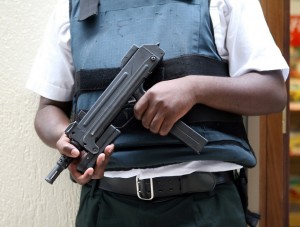 It took a while, but we finally figured out what bothered us most about the proposal by Wayne LaPierre.

As most people know, within days of the tragedy at Sandy Hook Elementary School in Newtown, Connecticut, the National Rifle Association executive responded to fierce criticism of the abundance of unrestricted firearms in America with his solution: every school should have an armed guard.

What’s wrong with that scenario? Perhaps nothing—but likely plenty… to the very constituency the NRA represents.

It’s a matter of elementary math, and of considering how Americans feel about new bureaucracy and additional spending. It’s also about a host of practical obstacles and questions that would need to be addressed.

According to the most recent numbers from the Bureau of Labor Statistics, elementary and secondary schools already have approximately 29,740 guards at an average cost of $31,420. That’s a total of $934,430,800. According to recent numbers from the National Center for Educational Statistics, there are about 98,817 public schools in the United States. Assuming armed guards, requiring far greater skills and risks, cost a lot more, say, at least $50,000 a year including benefits, the price tag would be at least $4,940,850,000 to the U.S. school budget annually—and that doesn’t include the costs of the weapons, special garb and their upkeep. (The NRA, very generously, actually pegs the cost at closer to $8 billion.)

At a time of fiscal cliffs and other metaphors for disaster, this is unlikely to sit well with anyone.

Which begs the question, who is actually employing these guards? The states? The federal government?  Local school districts? Who would most people like to pay their taxes to and see implement this new bureaucracy?

Just to hire nearly 100,000 new (unionized?) government employees would require substantial expansion of some bureaucratic entities, but which ones:  the Department of Education,  the ATF, thousands of school boards across the country?

And who is screening and certifying that these guards are qualified to carry weapons around children?

That’s just for starters. What sort of guns are these guards going to have: police- type handguns or automatic weapons?

Where will the weapons be kept: in the school or in the possession of the guards? And who will pay for them?

Where exactly will these guards be stationed: at the front door with visible weapons greeting children as they enter the school? Prowling the school grounds?

Once the children are safely inside their classrooms, what do the guards do? Do they walk around all day or do schools create special guard boxes, like those outside embassies and consulates? And if the guard is stationed in such a box does he not then become the first target for any gunman? Would each guard then be equipped with a bullet-proof vest and other combat gear?

And the more protected he is, won’t that just increase young children’s own apprehension and enhance the not uncommon notion that school is “jail?” How will parents feel about sending their young ‘uns off to be guarded by Rambo?

So, to recap, if we do as Wayne LaPierre suggests, we would be creating the equivalent of a vast new government agency with authority to vet and oversee these guards and equip them with all sorts of expensive hardware for a job that will entitle those who survive long enough to gain a pension for the rest of their lives.

Somehow it doesn’t seem like this will go over well with conservatives in Congress (and state houses and city halls and town meetings) who have been calling for the abolition of the Department of Education and trying to de-legitimize public employee unions and the ATF, and cut budgets at all governmental levels to the bone…and then some.

The NRA had to come up with…something. People are tired of LaPierre and his cronies  just saying, every time some innocent American dies, that “guns don’t kill people, people kill people” while ignoring the vast arsenal that has turned every classroom, every bowling alley, every bar and movie theatre in America into a potential gunfight at the OK Corral.

If the NRA really wants to be a force for positive change it will have to try harder.  LaPierre’s dubious scheme represents exactly the type of bureaucratic overreach that many gun owners say they fear most. On closer examination, it cannot possibly appeal to anyone on any side of the gun violence debate.