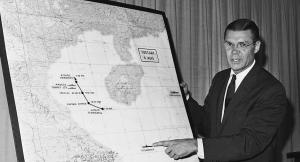 Of course, the people don’t want war… But… it is always a simple matter to drag the people along… All you have to do is tell them they are being attacked, and denounce the pacifists for lack of patriotism… It works the same way in any country.

So said Hermann Göring, Hitler’s right-hand man, before he committed suicide while facing the death penalty for war crimes in 1946.

Unfortunately, what might be called The Göring Doctrine has proved as tempting to democratic leaders as to fascist dictators. Witness these examples drawn from recent American history.

In March 1962, seven months before the Cuban missile crisis, the Joint Chiefs of Staff unanimously recommended to Secretary of Defense Robert McNamara and President Kennedy that the United States use Göring’s prescription for dragging the people into war with Cuba. They suggested a number of false flag operations including:

We could blow up a U.S. ship in Guantanamo Bay and blame Cuba. … [Or] we could develop a Communist Cuban terror campaign in the Miami area, in other Florida cities and even in Washington. … [fostering] attempts on lives of Cuban refugees in the United States even to the extent of wounding [anti-Castro Cubans].

While McNamara and JFK rejected these proposals, Bobby Kennedy resurfaced the idea during the Cuban missile crisis:

We should also think of whether there is some other way we can get involved in this, through Guantánamo Bay or something. Or whether there’s some ship that … you know, sink the Maine again or something. [Tuesday, October 16, 1962, 6:30 PM meeting in the Cabinet Room, recorded on JFK’s secret taping mechanism].

While that suggestion was also rejected, the Göring Doctrine came into its own two years later, when the Tonkin Gulf incidents of August 2 and 4, 1964, provided the legal basis for the Vietnam War.

Remember the Gulf of Tonkin?

At the time, the Johnson Administration portrayed America’s full-scale, boots-on-the-ground entry into the civil war between North and South Vietnam as a response to unprovoked acts of communist aggression. But a now-declassified phone call that LBJ made to former Treasury Secretary Robert Anderson on August 3 reveals the truth: communist naval forces in the Tonkin Gulf were in fact responding to U.S. covert operations in North Vietnam. 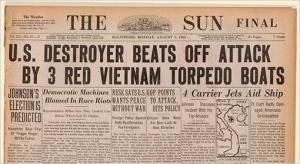 blowing up some bridges and things of that kind, roads, and so forth. So I imagine they wanted to put a stop to it. So they come out there and fire and we respond immediately with five-inch guns from the destroyer and with planes overhead.

In other words, contrary to what he later told Congress and the world, LBJ knew that prior American actions had provoked this North Vietnamese attack.

Adm. James Stockdale, who was overhead in a jet fighter sent to provide air cover for the American destroyers corroborates that this second attack never occurred:

I had the best seat in the house from which to detect boats – if there were any … but no wakes or dark shapes other than those of the destroyers were ever visible to me.

There something wrong out here. Those destroyers are talking about hits, but where are the metal to metal sparks? And the boat wakes – where are they? And boat gun flashes? The day before yesterday [August 2, 1964, the date of the first incident], I saw all those signs of small-boat combat in broad daylight! Any of those telltale indicators would stand out like beacons in this black hole we’re operating in.

During his over seven years as a POW in North Vietnam, Stockdale’s greatest concern was that his captors would realize he was flying air cover during the second “incident” and torture him into making statements which would hurt the war effort by proving that we had gone to war on false pretenses. Stockdale thought that war was inevitable, but was deeply disturbed that President Johnson had lied to win public support for it.

In spite of the first incident being provoked by our covert operations and the second never even occurring, when LBJ went on television on August 4 to beat the drums for war, he portrayed the U.S. as the innocent victim of aggression in Vietnam:

… renewed hostile actions against United States ships on the high seas in the Gulf of Tonkin have today required me to order the military forces of the United States to take action in reply.

… it is my considered conviction, shared throughout your Government, that firmness in the right is indispensable today for peace; that firmness will always be measured. Its mission is peace. [August 4 television address]

Remember 9/11 and the Weapons of Mass Destruction?

The Göring Doctrine came into play again after 9/11, when the Bush Administration rallied public support for an attack on Saddam Hussein’s Iraq. This was done by continually linking Saddam to the terrorist attacks on the World Trade Center and the Pentagon.

Several years later, when a reporter asked, “What did Iraq have to do with … the attack on the World Trade Center?” President Bush replied, “Nothing. … nobody has suggested in this administration that Saddam Hussein ordered the attack.”

Colin Powell’s famous speech about WMD at the UN

While Bush was technically correct, he was employing sophistry. A week before the invasion of Iraq, the Christian Science Monitor noted:

In his prime-time press conference last week… President Bush mentioned Sept. 11 eight times. He referred to Saddam Hussein many more times than that, often in the same breath with Sept. 11.

[T]he overall effect was to reinforce an impression…that the Iraqi dictator did play a direct role in the attacks. A New York Times/CBS poll this week shows that 45 percent of Americans believe Mr. Hussein was “personally involved” in Sept. 11…

In a Knight Ridder poll, 44 percent of Americans reported that either “most” or “some” of the Sept. 11 hijackers were Iraqi citizens. The answer is zero.

And then there was the second of the shifting justifications for going to war. Speaking to the UN Security Council on February 5, 2003, Secretary of State Colin Powell spelled out the case for attacking Iraq because it was stockpiling weapons of mass destruction. The media at the time hailed this speech. But it was based on blatant fabrications.

Powell’s Chief of Staff, Col. Lawrence Wilkerson, who worked on the speech, later lamented his part in crafting that speech:

I participated in a hoax on the American people, the international community and the United Nations Security Council.

Back to the Future?

Unfortunately, the West risks repeating the mistakes of Cuba, Vietnam and Iraq in the current Ukraine crisis.

A bipartisan chorus of opinion inside and outside Washington has pinned all of the blame for the conflict on Putin. A New York Times editorial summed it up this way: “There is one man who can stop it—President Vladimir Putin of Russia.”

Former Secretary of State Hillary Clinton, a front-runner for her party’s presidential nomination in 2016, has compared Vladimir Putin to Adolf Hitler–-implying that if the West doesn’t intervene in Ukraine, Americans may well be fighting Russian aggression on their own shores in the future.

It has, paradoxically, been left to advisers to former Republican presidents to raise serious doubts about this rush to judgment.

I believe it has been a very big strategic mistake – by Russia, by the EU and most of all by the U.S. – to convert Ukrainian political and economic reform into an East-West struggle. (emphasis added)

Dmitri Simes, who advised President Nixon on Soviet matters, stated in an interview:

I think it [the Obama administration’s approach to the Ukraine] has contributed to the crisis. … there is no question in my mind that the United States has a responsibility to act. But what Obama is doing is exactly the opposite from what should be done in my view.

The politics of post-independence Ukraine clearly demonstrates that the root of the problem lies in efforts by Ukrainian politicians to impose their will on recalcitrant parts of the country, first by one faction, then by the other. …

A wise U.S. policy toward Ukraine would seek a way for the two parts of the country to cooperate with each other. We should seek reconciliation, not the domination of a faction.

Some may wonder if these criticisms are motivated by a partisan instinct to criticize foreign policy while Democrats hold the White House (although I do not). But a voice from overseas also challenges the emerging anti-Putin consensus from another perspective.

Tony Brenton, British Ambassador to Moscow from 2004 to 2008, has warned against basing a foreign policy on the “narrative” that Putin is an insatiable expansionist:

Brenton goes on to warn that “the Russians are ready to go to the brink to achieve their political objectives in Ukraine.” The Russian bear has lost many of its teeth, leaving nuclear threats—and therefore, potentially, nuclear use – as its only ace in the hole.

Which makes the mutual saber-rattling over Ukraine that much more dangerous. After 70 years, it is high time to learn from the mistakes of the past, and stop following Göring’s script from dragging us into needless wars.

NOTE: Other historical examples of the malign influence of The Göring Doctrine on U.S. foreign policy can be found in Prof. Hellman’s 10-part series on Avoiding Needless Wars.

16 responses to “Manufacturing War: A Primer”