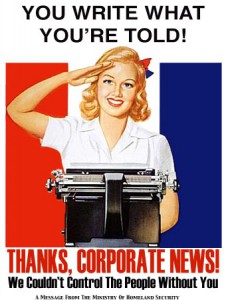 The New York Times’ “Public Editor” wonders if the paper ought to explicitly call officials on their lies. But a look at a typical day in the life of the paper shows that the truth problem runs a lot deeper.

Continuing on our theme about the limitations of the corporate owned media, and how it shapes our worldview and our world….

On Thursday, Arthur Brisbane, the New York Times’s Public Editor (reader advocate of sorts) posed a question in his column that caused a firestorm, with strong feelings on both sides. He asked whether journalists should “call out” public figures when they seem to be lying (as opposed to passively reporting their dubious claims). The piece was headlined “Should The Times Be a Truth Vigilante?”

That being a “truth vigilante” is not the default practice at the Times and other news organizations is revealing about the limitations of the prevalent style, which tends to show considerable deference to authority figures.

I hadn’t even seen Brisbane’s essay when I opened up my “Times Reader” (simulated NY Times front page) and reviewed the top stories in the world’s most respected paper that day. I wish I had. Because what I saw was much worse than just not challenging lies. It was essentially enabling them. And it was not the reporters, but the institution itself.

What stood out were the themes that emanated from the headlines and summaries, and the larger message that emerged from the selection of stories being highlighted. Perhaps not entirely consciously, the editors were themselves having a powerful subliminal effect on the rest of us.

Adversaries of Iran Said to Be Stepping Up Covert Actions

A campaign of bombings, assassinations, defections and cyberattacks, which experts believe is mainly Israel’s work, seems meant to halt Iran’s progress toward a nuclear weapon

Let’s focus just on the headline and summary, which is all most people will read—and which are not written by the person doing the reporting, but by desk editors and higher-ups who understand certain realities and exigencies. The headline is fine—neutral, and probably correct. But what about the summary’s assertion that “experts” believe it is “mainly Israel’s work”?

We know that the former heads of Israel’s two main spy agencies have criticized Prime Minister Netanyahu’s proactive stance against Iran, because of serious doubts that Iran is any kind of great or immediate threat to Israel. So, if those “experts” want us to think it is Israel’s work, why? And, if indeed it is Israel’s work, why again? Could Netanyahu be pursuing such activities—or at least have accepted a role as the public face of these actions—as a surrogate for Western interests who have a keen interest in retaking the oil-rich and strategically important country? That’s at least a distinct possibility—a kind of quid pro quo for political support for Netanyahu—and deserves journalistic exploration.

The second problem with the New York Times summary is the assertion that the campaign against Iran “seems meant to halt Iran’s progress toward a nuclear weapon.” In fact, it seems meant to destabilize the regime, and create an atmosphere in which an internal uprising or purported Western “humanitarian” or peace-keeping intervention become possible.

(Read more about the signs of coming war with Iran here.)

Where have we heard such credulous assertions before? Iraq? Libya? Syria?  Consider the widespread doubts about Iran’s nuclear capabilities, intentions, and imminent threat to the US or its allies. Then recall the role of the Times and other media outfits in putting out exactly this kind of official line in other situations where it was proved wrong but played a seminal part in the propaganda effort that led to war. You’d think journalistic conscience, initiative and 20/20 hindsight would suggest some other course of reporting.

Against Odds, Path Opens Up for U.S.-Taliban Talks

The Taliban’s willingness to open a political office in Qatar represents a critical point in the United States’s attempt to negotiate an end to the war in Afghanistan.

Headline: Against what odds? What other option exists in this, the latest in a string of failed military interventions?

Summary: The Taliban is willing to create the environment for dialogue with its hated enemy. Wonder why? And why would the US negotiate with such a brutal force? For answers, we have to turn to another Times article, from 2010. That earlier piece seems to have made no long-term impression. But it is oh-so-relevant in explaining why the US is willing to give up its moral stand in defense of the victims of the Taliban—and find some kind of accommodation with these extremists. And why the very keen leadership of the Taliban is quite willing to find common ground.

It’s worth reading an extensive excerpt from the 2010 article in light of this new, seemingly illogical dalliance between ideological foes:

“Common ground” indeed! It seems reasonable to conclude that the 2010 Times piece was another piece of government propaganda, allowing the US military to announce that, gee whiz, we just discovered that Afghanistan is chock full of valuable minerals — thereby providing another reason for American troops to remain, after the older excuses—Al Qaeda’s presence, concern for democracy, had grown stale.

Now, how surprising is it that a journalistic enterprise which so willingly does the government’s bidding in such important matters has trouble deciding whether or not to call out the lies of politicians and government officials in its news columns?

This one had no summary on my screen. But here’s the lead paragraph of the story, aptly datelined from the town of NORTH, S.C.:

The grim just gets grimmer here at the Edisto Grocery, where all day long people with not enough work come to eat $2.25 fried bologna sandwiches, pick up some horse feed and complain about the price of diesel.

(This from a newspaper whose own employees are reduced to petitioning their owner not to cut their pensions and other long-promised benefits.)

How do you keep the American people from getting too angry at the few who always manage to make out like bandits? Start a war far away, focus on external enemies, and pick up a bit of fuel in the bargain.

And if people are still angry, paying attention to how lousy the vaunted American democratic experiment is turning out for them, there’s always…distraction and fantasy.

This brings us to the “soft” offering from the “front page”:

If You’re Mad for ‘Downton,’ Publishers Have Reading List

The popularity of all things “Downton Abbey” has American book marketers trying to ride a British aristocracy wave.

The combined message from these selected offerings is this: pay attention, but to the same old official line—not to your own instincts on what is going on, and not to what history tells us. Don’t think about what and who keeps messing up our world, or why.

Then, when this wholly inadequate “news coverage” has you feeling totally frustrated, confused and hopeless—well, here, dope up on some pleasurable fantasy about the glamour of your betters.

Now….Don’t you feel a lot better already? And, really, who needs “truth vigilantes?”

8 responses to “Sugarcoating the Lies: A New York Times Sampler”