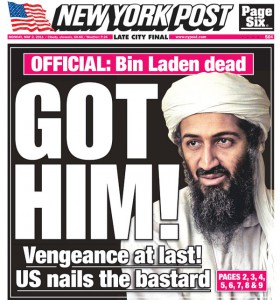 Was Osama bin Laden intentionally shot? Weren’t they all sleeping at 1am local time—and why couldn’t the small number of people in the house have been immobilized with gas or stun technology? What was the internal policy on how to handle the ultimate hot potato—and what were the real preferences in terms of “dead or alive”?

Why did they first tell us that he “resisted” and therefore had to be shot? Surely, the SEALS and their commanders knew at the time what happened—and communicated that well before Obama’s speech. How did the story get screwed up initially?

Why did they first tell us that bin Laden’s party used a woman as a “human shield” when that was not true?   See above.

Why, exactly, did he have to be tossed into the sea? Why not say he was given a land burial, per Islamic law, in an undisclosed location—but do so in a location where his body could be exhumed were additional forensic work deemed necessary at a later date?

What about the timing of this event? Coming on a Sunday night, on the heels of the imperial good feelings associated with the royal wedding, shortly after a number of other carefully considered media events (e.g. the birth certificate release), all timed with the launching of Obama’s re-election campaign?

Can those who were tough on Bush apply the same standards and skepticism to the Obama administration, or is everything partisan and self-serving now?

Do we, after all of the years of lying, all of a sudden accept whatever the government says as true?

0 responses to “12 Questions About Bin Laden”