Towns throughout the US face challenges from climate change. Photo credit: Adapted by WhoWhatWhy from Burnt Pineapple Productions / Flickr
Environment

Climate Crisis: The Time to Act Is Now

America is on fire. It’s also underwater. And dry. And hot. And freezing.

Human-caused climate change has become too obvious to be kicked down the road. Jeff Masters, a meteorologist and co-founder of Weather Underground (not the radical group), has called 2021 “a really insane weather year, a year of incredible extremes.” Some of them, he added, “boggled even me.”

Wherever you look, the news is dire:

Unfortunately, even a piece of good news has led to bad: A steep drop in air pollution particles over the North Atlantic after the US enacted stricter air pollution rules (good) has meant fewer particles reflecting sunlight back out into the atmosphere, and therefore more sunlight reaching the Earth (bad).

If the weather itself doesn’t bother you, the bills coming due should. RMS, a risk analysis company, has estimated that Hurricane Ida alone caused up to $44 billion in insured losses across its entire track for onshore and offshore wind, surge, and private flood losses. And that’s not the final tally.

In 2019, the Federal Emergency Management Agency (FEMA) said it would start to price flood insurance based on the particular risks facing each individual property. The new system took effect October 1 for people purchasing flood insurance. For existing customers, rates will rise starting next April. In some parts of Florida, The New York Times found, the cost of flood insurance will eventually increase tenfold.

None of this information is being reported enough. Of 774 total TV news segments about Ida, only 34 — just over 4 percent — mentioned climate change. Ida caused 77 deaths and more than $40 billion in damage.

To raise awareness, WhoWhatWhy asked seven reporters to choose a town hit by climate change; report on the effects on residents, businesses, and the environment; and ask town officials about any plans to address the issue. The towns our staffers chose — Charleston, SC; Coney Island, NY; Corpus Christi, TX; Honolulu, HI; Oakland, CA; Portland, OR; and Utqiagvik, AK — face threats from excessive heat, flooding, and/or wildfire. 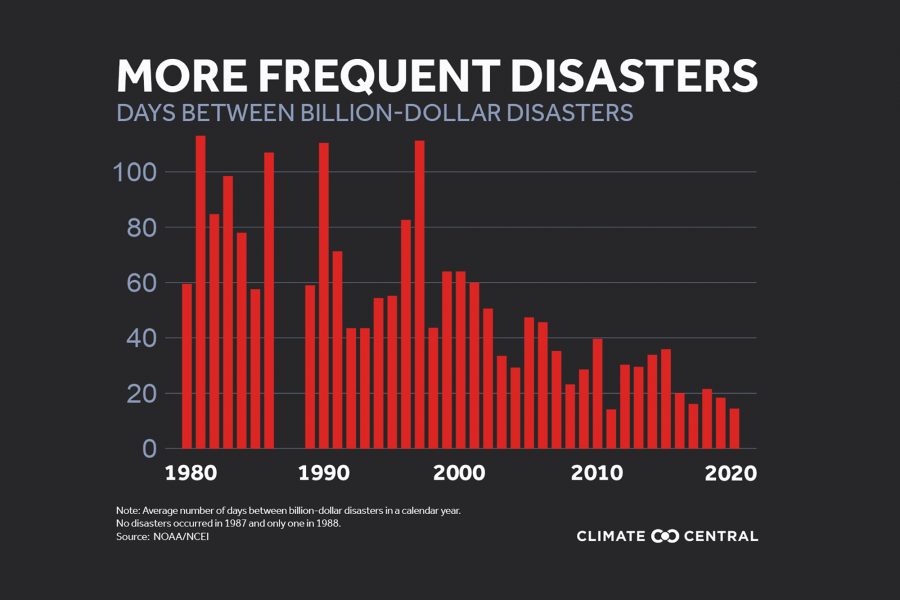 The average number of days between billion-dollar disasters has been shrinking over the years. (No such disasters occurred in 1987, and only one occurred in 1988.) Photo credit: Climate Central

A 19th century American scientist named Eunice Foote documented the underlying cause of today’s climate change crisis. The year was 1856, and Foote’s brief scientific paper was the first to describe the extraordinary power of carbon dioxide gas to absorb heat — the driving force of global warming.

Sadly, despite all the evidence accumulated since Foote’s day, climate change skeptics still exist, so it seems necessary to state the obvious: Almost all respected scientific groups have agreed for years that climate change has been occurring for decades and is largely human-caused.

Asked what one can say to change the mind of a climate change denier, Masters answered, “The laws of physics don’t care about what you may think. The atmosphere responds in a very predictable way to how much sunlight comes in and how much of the sun’s heat is trapped by greenhouse gases. The largest collaborative scientific effort in history, performed by thousands of scientists over the past 30 years — the [Intergovernmental Panel on Climate Change] reports — are adamant that human activity is responsible for nearly all of the observed global warming in recent decades.”

Our series is timed to coincide with the 26th UN Climate Change Conference of the Parties (COP26),scheduled for November 1-12 in Glasgow, UK. It’s a follow-up to the 2015 Paris Climate Change Conference, at which the Paris Agreement was signed. Adopted by 196 countries, Paris set a goal of limiting average global temperature rise to “well below” 2 degrees Celsius, and preferably 1.5 C, compared with pre-industrial levels.

Mark Hertsgaard, executive director of Covering Climate Now, a global journalism effort to increase coverage of climate change, has called COP26 “one of the most important diplomatic gatherings in history, because it will go a long way towards deciding whether we preserve a livable climate on this planet.”

And if we do nothing to limit emissions, especially of carbon dioxide? Some of the CO2 we’re emitting today will still be in the atmosphere a millennium from now and warming the Earth, according to Michael Oppenheimer, professor of geosciences and international affairs at Princeton and an environmental expert of long standing. “The big supertanker analogy is perfect here,” Oppenheimer said at a press briefing in September. “It’s very difficult to turn it around, so the earlier you get started the better. 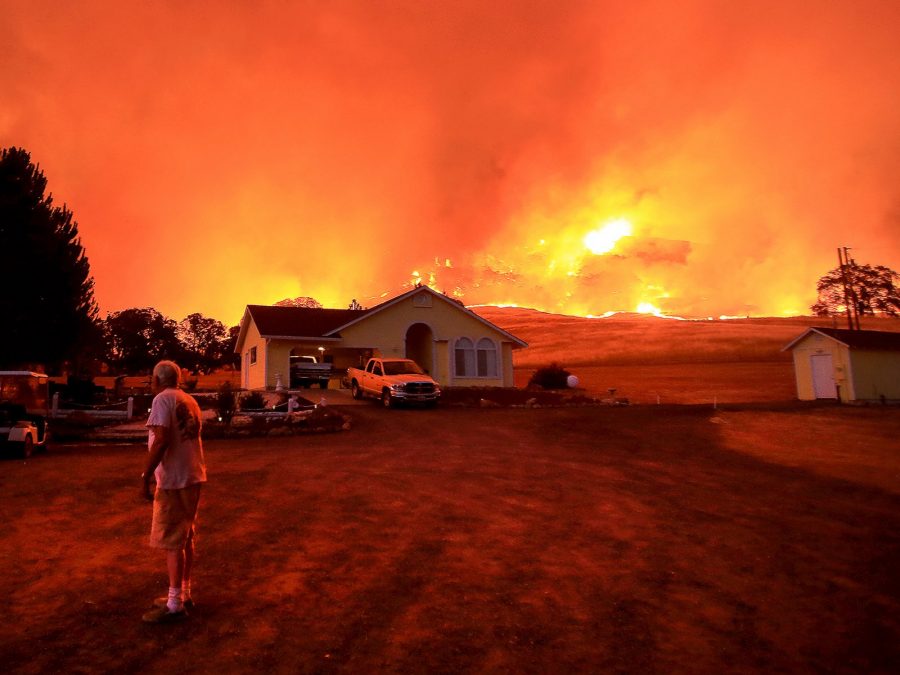 The Valley Fire destroyed hundreds of homes in Northern California in the late summer of 2015. Photo credit: Jeff Head / Flickr

Some Cause for Hope

Many universities, most recently Harvard, have committed to divesting from fossil fuels.

Some efforts to limit or turn back climate change show promise, but many are still on the drawing board. For some of our recent coverage of novel approaches, see the following stories:

Individuals can help somewhat. Investing in solar panels, an electric car, or an electric heat pump are all good actions, said Masters, in addition to going vegan. But, he added, “Since the climate crisis can only be solved by coordinated global action, the best way an individual can help is to support leaders who are committed to taking action on climate change.”

The bottom line: If climate change is to be slowed enough to make a difference, leaders from around the world will have to find a way to buck the political and financial power of the fossil fuel industry and begin to turn that supertanker around. One of the key goals at COP26, according to conference president Alok Sharma, will be to “consign coal power to history.”

International cooperation on the environment isn’t unprecedented: In 1987, countries from around the globe came together to sign the Montreal Protocol protecting the ozone layer. A hopeful sign today is that Costa Rica and Denmark are working to form an alliance of countries committed to eliminating oil and gas production, as well as ending permits for new exploration. It’s set to launch at COP26.

Clearly the time is now. “If it seems like we’re headed toward a cliff at high speed,” Masters said at a recent webinar, “we’ve given the right impression.”

To see how weather changes are already affecting your neighbors across the US, read our upcoming series. And stay tuned: WhoWhatWhy will continue to raise environmental awareness in the months to come.