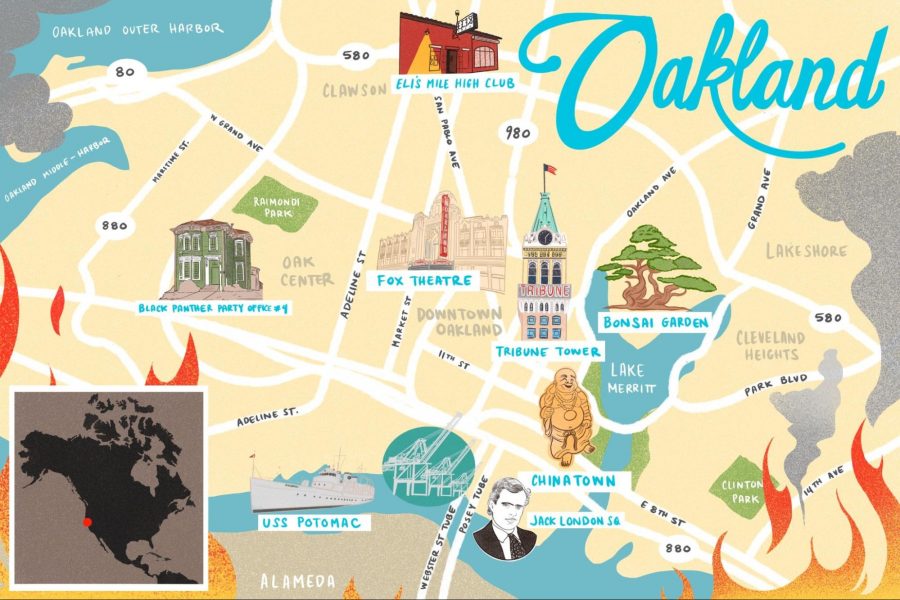 One year ago, residents of the San Francisco Bay area awoke to find the skies had darkened to a deep, dystopian shade of orange. Ash blanketed cars and windows, and the smog rolled past in thick gusts.

Corrine Foster, 19, was in the hospital that day getting treated for asthma. Wildfire smoke is one of her “main triggers” for asthma attacks.

“I take the medicine I’m supposed to, but sometimes [smoke] gets inside,” Foster said.

Wildfire season was nothing new for most residents, but the 2020 season surpassed anything California had seen before, and the orange sky — a result of the way smoke particles scatter sunlight — was a glaring reminder of how much worse the fires had gotten. It was a wake-up call even for those without asthma.

“When you’re in the smoke, nonasthmatics get a taste of what it’s like for asthmatics on a regular basis,” Foster said.

By early September 2020, the state had already set a record for most acres burned in a year, 2.5 million. That season included three of the four largest wildfires ever recorded in the state, according to the Governor’s Office of Emergency Services.

As global warming increases, prolonged drought in the region has worsened the conditions that lead to these huge fires, which in turn release large amounts of heat-trapping carbon dioxide into the atmosphere. The 2020 fire season released 111.7 metric tons of carbon dioxide, more than every economic sector except transportation.

The immediate and long-term dangers posed by wildfire pollution are spelled out in a stark advisory from the California Air Resources Board:

Wildfires produce a range of harmful air pollutants, from known cancer-causing substances to tiny particles that can aggravate existing health problems and increase the risk of heart attack or stroke.

While orange skies appeared all around the bay, the wildfire smoke had the greatest impact on communities long plagued by air pollution and the resulting high rates of upper respiratory illness.

Pockets of Oakland, in particular West Oakland and East Oakland, are prime examples of these disparities.

Surrounded by the Port of Oakland and bordered by three major freeways, West Oakland, which is mostly Black and Latinx, faces some of the highest pollution burdens in the Bay area.

Overall, more than 16 percent of children under 18 years in Oakland have asthma, according to the most recent (2018) county data. 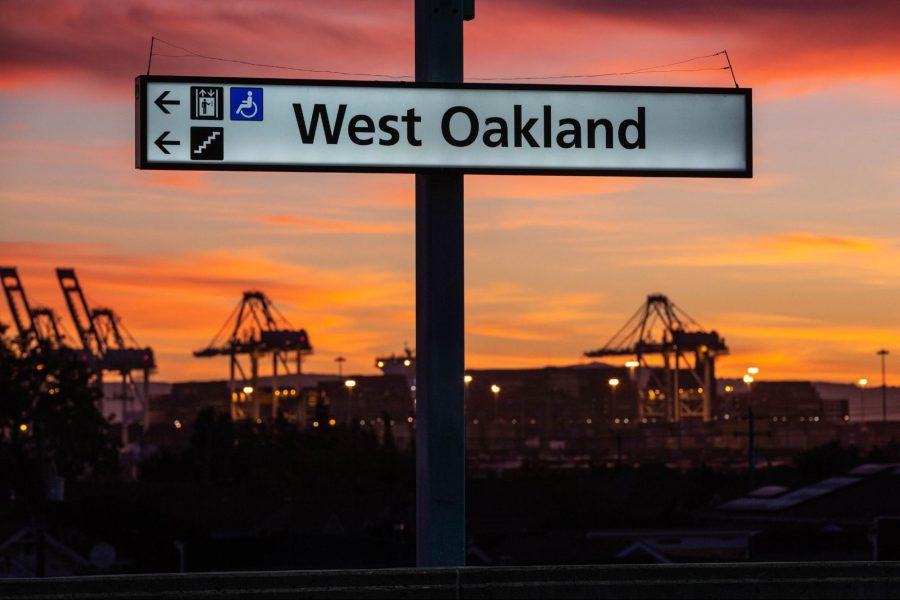 Brenda Yamashita, who oversees an Alameda County Health Department program called Asthma Start, has been doing just that, working in the homes of families with asthmatic children.

“We really try to look at the reduction of hospitalizations and ER visits by teaching the parents how to manage the asthma, how to look for things that trigger it,” Yamashita said. “Our parents say they feel more confident, being able to handle their child’s asthma, because it’s a scary thing when your child can’t breathe and you’re trying to figure out what to do, and you don’t know where to go, why did it happen, how do I stop it from happening again.”

The program currently works with about 100 families throughout Alameda County, which includes Oakland. “We added education for the parents,” Yamashita said, “so they can start to understand: What does a ‘Spare the Air’ day mean? What can wildfire smoke do to you? What does it mean if the particulate matter is at this level?”

Spare the Air days are declared when the forecast for particulate matter smaller than 2.5 microns (about 1/28 the diameter of a human hair) exceeds the federal standard of 35 micrograms per cubic meter of air.

There were 46 Spare the Air days in 2020, the highest of any year in the last two decades, according to the California Air District. There were also 25 days in 2020 when the air quality exceeded the national 24-hour standard for particulate matter smaller than 2.5 microns.

An April study conducted in San Diego found that small particulates from wildfires were about 10 times more harmful for children’s respiratory health than those from other sources, such as traffic emissions. This was especially true for babies and children up to age five.

Foster, who has lived “a little bit all over” in the Bay area, was diagnosed with asthma when she was two and joined Asthma Start in sixth grade. The 19-year-old still follows the protocols Asthma Start recommends on days when the smoke is thick, including closing windows and staying inside, or wearing an N95 mask if she has to be outdoors.

“When I first started noticing the smoke getting worse — usually my mom doesn’t let me out of the house,” Foster said.

The program has provided her with the “necessary knowledge of what to do, what not to do, which ways to prevent letting [wildfire smoke] trigger me and what to do if it does,” Foster said.

Asthma Start provides her with an air purifier, but Foster said she still had to go to the hospital this year when there were several local fires. She’s had to be hospitalized for asthma one to two times per year since starting high school. Now in college, Foster plays basketball for the school but sometimes has to miss practices or games when the smoke is too bad.

“There’s certain precautions I have to take,” Foster said. “I have to go the extra mile.”

“With the wildfires, you’re talking about a much higher pollution than you would typically get in regular air pollution from cars and industry,” said Dr. Mary Prunicki, director of air pollution and health research at the Sean N. Parker Center for Allergy Research at Stanford University.

Although the California Air Resources Board issues recommendations for limiting exposure on Spare the Air days, Lamb noted that they can be hard to follow for low-income residents.

“I look at recommendations and they say ‘leave the area’ and go to someplace with better air quality, and that requires both money and flexible jobs,” Lamb said. “They say ‘stay inside,’ which isn’t possible for people who work outside or have to commute on public transit.”

Low-income families are also at a disadvantage in trying to follow another recommendation: to create “cleaner spaces” at home, Lamb said. Renters have little control over their building’s heating, ventilation, and air conditioning systems, and many families don’t have the financial means to purchase and maintain their own portable air purifiers.

Asthma Start has tried to close some of these gaps by providing purifiers to low-income families, Yamashita said, but because of the cost, eligibility criteria are imposed, such as living within a certain distance of a freeway or polluting industry.

The California Department of Health Care Services approved a one-time $10 million grant in August 2020, when the fires were raging, as part of an Asthma Mitigation Project. Alameda County received $1.5 million, some of which will go toward providing air purifiers to low-income families with asthma, Yamashita said.

For everyone else, do-it-yourself air purifiers using a box fan and a high-efficiency filter available at hardware stores have become more common.

Although air purifiers and other recommended measures can alleviate the problem in the short term, there’s little research on the long-term effects of wildfire smoke.

The lack of research is due in part to the fact that there is no medical code for doctors to use when they diagnose or treat wildfire-related illnesses.

“A lot of medical schools don’t have classes on climate change and how it impacts health,” Prunicki said. “People are working to educate the health professionals more, not only to understand what the tie-ins are, but also to help counsel on how to mitigate some of those impacts.”

Lamb said that an increasingly popular area of research looks at how the health impacts of wildfire smoke vary depending on where — and what — the fires are burning. Forest fire smoke has a very different chemical makeup than smoke from fires that burn buildings and houses.

Although the asthma community is well aware of the health impacts of wildfire smoke, the issue could become much more acute as fires grow more severe and burn larger and longer.

“Based on everything we know about particulate matter more broadly, I think we can assume that it could lead to the onset of asthma in otherwise healthy people,” Lamb said. “Everyone should be concerned about breathing wildfire smoke, whether they have asthma or not.”