Aerial view of Waikiki, center of the state’s lucrative visitor industry, which lies on the south side of Honolulu. Beaches there are narrowing due to rising seas and erosion, threatening city buildings, commercial property, and private homes within meters of the shore. Photo credit: Edmund Garman / Flickr (CC BY 2.0)
Environment 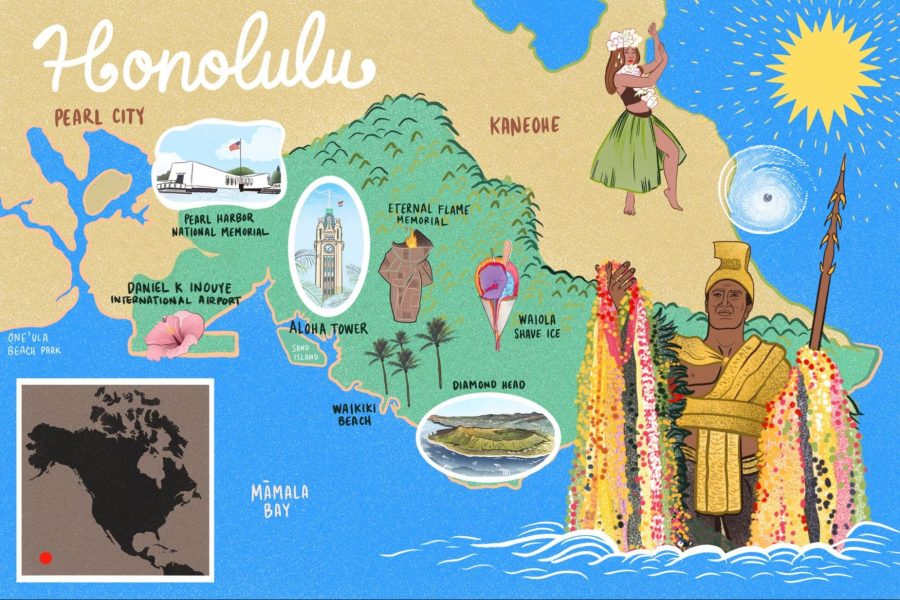 Hawaii is on countless bucket lists, attracting millions of tourists each year whose Instagram photos make the shoreline look timeless, pristine and unharmed. But they don’t capture the bigger picture: Hawaii’s famous beaches are slowly disappearing.

In fact, to keep Waikiki Beach and other popular Honolulu beaches picturesque, tons of sand were imported from California to replenish the lost resorts.

“It’s ironic considering Hawaii is a tourism state,” said Charles “Chip” Fletcher, associate dean for academic affairs at the School of Ocean and Earth Science and Technology, University of Hawaii at Mānoa. “We sell ourselves as a beach city, but at the same time our policies up until recently have not protected beaches.”

Based on trends of rising sea levels and sand erosion, nearly 40 percent of the beaches on Oahu alone could be lost in the next 30 years, according to a report by the University of Hawaii at Manoa. That includes the iconic Waikiki Beach in Honolulu, the birthplace of modern surfing, known worldwide for its rolling waves and white sand, and set against the backdrop of the Diamond Head volcano.

Trade winds once cooled Honolulu, so much that air conditioning wasn’t built into most older homes, said Melissa Miyashiro, the incoming executive director of the nonprofit climate activism group Blue Planet Foundation. But those winds have dissipated. “Residents can feel that things are getting hotter,” she said. “We’re feeling them more acutely.”

Fletcher, who also chairs the Honolulu Climate Change Commission, said that some local residents used to wear flannel shirts outdoors not too long ago; now, the weather is simply too hot for that attire.

Along with air temperatures, sea levels are rising about 1.5 millimeters per year in Hawaii, according to climatologists. That number might seem insignificant, but multiply it by 100 years to measure change within the next century, and the state’s sea level could rise about 150 millimeters, or almost six inches.

To combat rising tides, many coastal property owners have erected seawalls. The walls protect their property, but they also help to erode the beach, as waves crashing against the walls pull away the sand underneath. A Nature report analyzed 60 percent of the Oahu shoreline and found that more than half is eroding. The average erosion rate for the entire island was 1.2 inches per year, plus or minus .4 inches.

With the population along the Honolulu coast likely to increase further, pressure to continue building seawalls will likely lead to further beach loss. Researchers predict that one-third of the Oahu shoreline could be hardened by 2100 if coastal populations continue to increase and shoreline hardening rates stay the same. 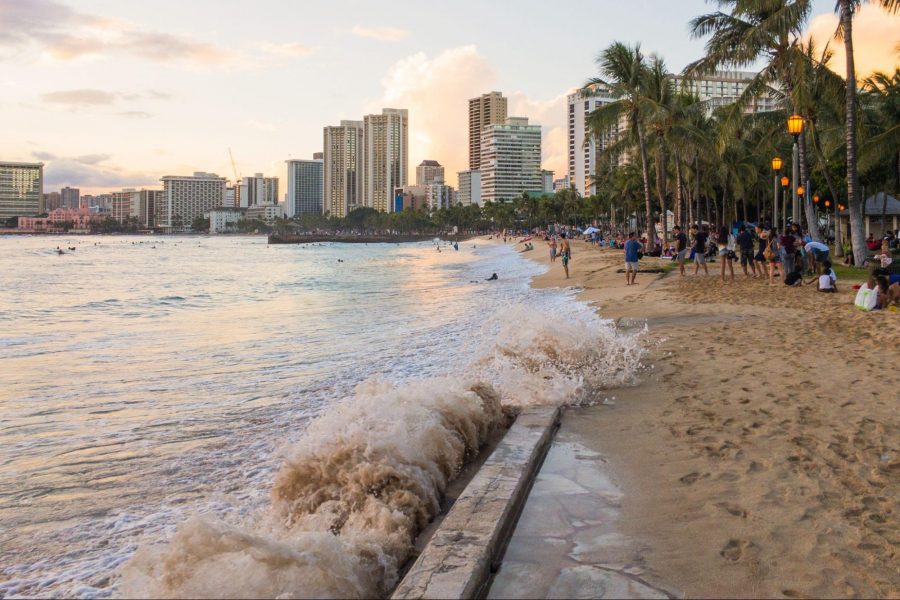 Waves crashing against the short seawall at Queen’s Beach in Honolulu during an especially high tide in 2017. Photo credit: Daniel Ramirez / Flickr (CC BY 2.0)

The seawall effect in Honolulu has global implications for the clash between private property and public interest. A Science Daily report determined, “Oahu is used as a living laboratory of land use decisions, and, by extension, these results are indicative of beach conservation stresses in similar situations around the world.”

Unfortunately, sea level rise means more than the ocean pouring over the shoreline.

“Only two feet below the ground is the water table,” said Fletcher, the associate dean at the University of Hawaii at Manoa. “As the ocean goes up due to climate change, the water table goes up as well.” Saltwater then forces its way up the pipes that runoff is designed to go down. And with a high water table, water from rain and floods can’t filter into the ground.

Major flooding is also more likely — and dangerous. In March, Gov. David Ige declared a state of emergency after a torrent of rain and flooding damaged half a dozen Honolulu homes, burying properties under several feet of debris.

Floods might create the illusion of too much water, but Hawaii is actually grappling with more than a century of declining rainfall, a troubling trend since about 90 percent of the water Hawaii uses for drinking and agriculture comes from underground aquifers supplied by rainwater, said Pao SHin Chu, professor and state climatologist at the School of Ocean and Earth Science and Technology. 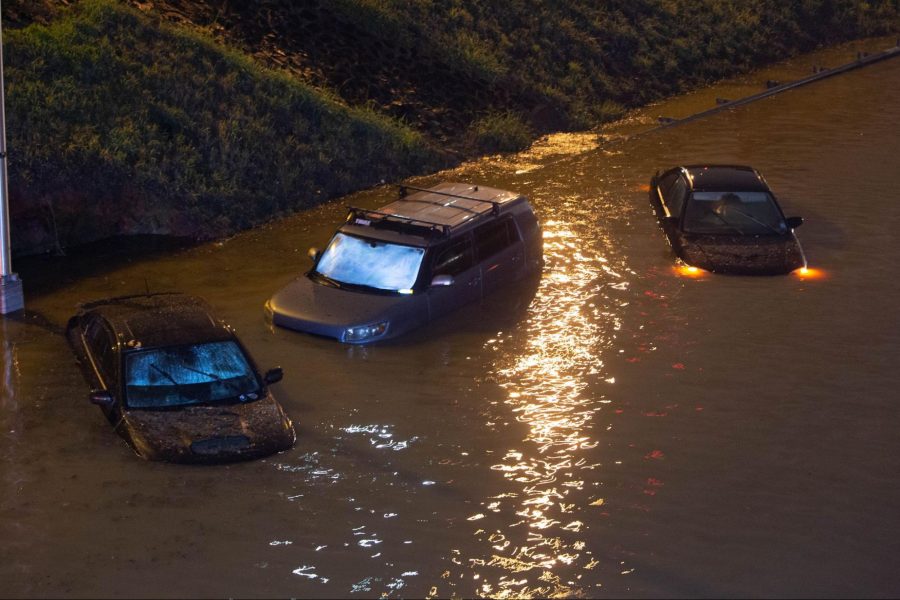 Drivers stranded on Highway H1 in Honolulu due to flooding from Tropical Storm Darby in 2016. Deities worshipped by ancient Hawaiians fell into two main categories: One represented protective gods, the other the forces of nature. With a changing climate, those first gods will be called on more and more to guard against the second. Photo credit: Anthony Quintano / Flickr (CC BY 2.0)

Hurricanes have rarely hit Hawaii in recent decades, Fletcher said. Instead, they typically form off of Mexico or Central America, and either travel towards the central Pacific or in a northern direction.

“They used to pass south of the Big Island,” Fletcher said. “Every now and then we would get one that would hook up, like Hurricane Iniki 30 years ago.”

Still, hurricanes like warm water, and as temperatures rise, storms may track toward the warmer coasts of Hawaii, sites they had previously passed. Scientists project an increased frequency and intensity of El Niño, which could affect these patterns.

Additionally, as the tropics expand worldwide, so do the zones of maximum winds. Tropical cyclones that become hurricanes migrate away from the equator, putting hurricanes on the same plane as the Hawaiian islands. To put this into perspective, Honolulu has historically experienced about three tropical cyclones per year. In 2019, however, the city experienced four cyclones and one major hurricane.

Although Hawaii avoided a direct hit from Hurricane Lane in 2018, a recording station on the Big Island tallied 57 inches of rain during the storm’s four-day period. Mudslides ensued, and winds on the storm’s periphery caused wildfires, with at least one a result of arcing electrical wires.

In addition, Chu and Fletcher are concerned about hurricane-caused storm surges, power outages, and disruption of transportation channels that are a lifeline to the state.

“We’re alone, we’re far from any rescue,” Fletcher said. “We only have one refinery, and no airplane could fly in because it wouldn’t be able to refuel.” Major harbors could be severely damaged as well, Chu noted. 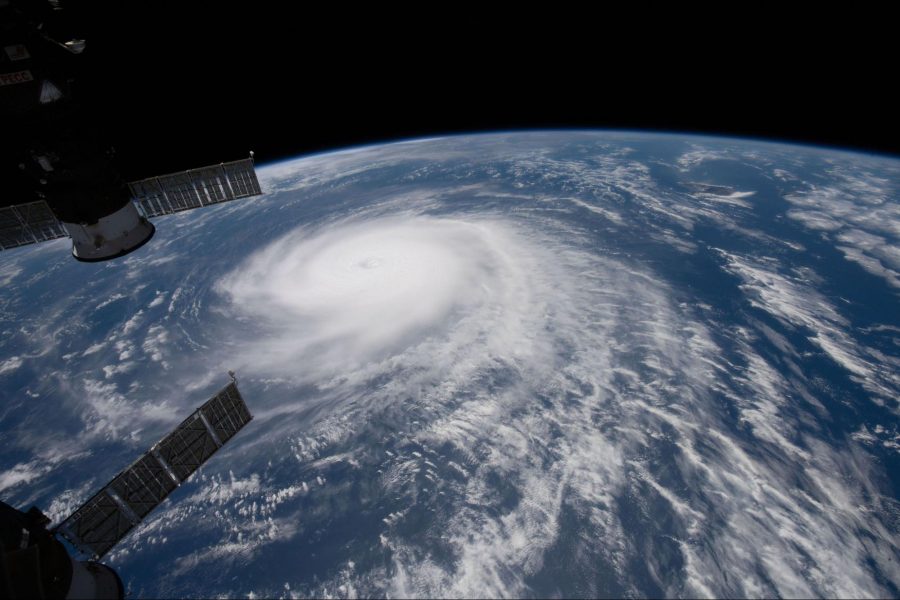 Hawaii is not self-sustaining: 90 percent of its food arrives by cargo planes or ships. “As an island state, we’re in a particularly vulnerable position,” Miyashiro said, “not only because we’re isolated in the Pacific Ocean and anticipate feeling the impact of sea level rise, but also because we’re isolated and reliant on imported fuel to power our electrical grid and for our food.”

Much of Honolulu’s infrastructure is on the shoreline, Miyashiro noted, with “the visitor industry right in the strike zone for increased storms.” Most houses in Hawaii are built with single-wall construction and aren’t strong enough to stand up to hurricanes of Category 3 and above, Chu said.

In 2017, when Hurricane Maria devastated Puerto Rico, aid was negligible and late. As David Wallace-Wells writes in The Uninhabitable Earth, “When climate disaster struck there, we processed their suffering, perhaps out of psychological self-interest, as foreign and far away.”

It’s not unreasonable to wonder if Hawaii would receive the same response.

The state government, nonprofits, academic and civilian activists, and the greater Honolulu community are proactive in climate change discussions.

Hawaii’s Climate Commission supports legislation that requires land sellers to disclose if their property is in an area exposed to sea level rise and would request that all new development and redevelopment be directed away from beach areas.

However, it’s unclear whether these goals have any teeth. A 2020 investigation by ProPublica and the Honolulu Star-Advertiser, for instance, found that property owners have used loopholes in state and county laws to get around beach preservation laws pertaining to the building of seawalls.

When it comes to solving climate problems other than sea level rise, the future looks brighter.

Honolulu Mayor Rick Blangiardi announced on Earth Day this year the city’s first climate action plan, “One Climate: One Oahu,” which lays out a community-driven strategy for Oahu to uphold its commitment to the Paris climate agreement and reduce carbon emissions beyond net-zero by 2045. Proposed strategies include building protected bikeways safe for all ages, capping public bus fares, making more efficient use of water resources, and using renewable energy in city operations.

Fletcher’s Honolulu Climate Change Commission is trying to improve the city’s preparation and response to weather disasters. The commission’s Resilience Office tracks climate change science and potential impacts on city facilities. A top priority is investment in long-term solutions to increase self-sufficiency and shift Hawaii from dependence on imported resources. Measures could include establishing a strategy to sustain the food supply during emergencies.

Independent organizations also hope to mobilize the most energetic voices of all — those of young people. “We’ve found their voices are certainly very inspiring,” Miyashiro said. “They have a personal stake in this climate challenge, because they’re the ones experiencing the consequences of the decisions we’re making from a policy standpoint.”

Blue Planet Foundation, based in Honolulu, gives high school students the chance to discuss climate change with elected officials. It also has a KHON2 TV series, Empowered Hawaii, that showcases everyday residents who have made energy-efficient choices, such as choosing public transit over driving. “Those are the stories that resonate with and inspire people to see that they can make a lifestyle change,” Miyashiro said.

Despite these efforts, those who know the most about changes in Hawaii’s climate are worried.

“I’m not optimistic about the future, because we know rainfall and streamflow have declined in the past 100 years,” Chu said. “When I look at the picture, I don’t think it’s pretty for water supply.”

And as the Honolulu population continues to grow, so does the need for more water resources. “No water, no life,” said Chu, who stressed the need to control emissions of greenhouse gases.

Miyashiro sees one ray of hope.

“Where I feel optimistic is the personal responsibility to do what I can, to help with the global challenge with the time that I have on earth,” she said. “That sense of responsibility guides me. The only way to keep going is to have hope and to celebrate the successes along the way.”