There are about two million cooling towers across the US. Noya plans to use existing towers to capture carbon dioxide from the atmosphere. Photo credit: Thawt Hawthje / Flickr (CC BY 2.0)
Apprentice Stories Environment

Capturing Carbon One Cooling Tower at a Time

In mid-August, a cooling tower in San Leandro, CA, assumed a new and unusual role. Its original duty had been to remove excess heat from the pasteurization process at a creamery run by Alexandre Family Farms. Now, after a retrofit installed by the San Francisco tech startup Noya, the tower also captures carbon dioxide out of the air.

With some 2 million more cooling towers hidden in plain sight across the US, Noya is set on scaling its technology to levels that can make a serious dent in atmospheric carbon levels. By the company’s estimates, the nation’s towers could together capture 7 to 10 billion tons of carbon dioxide per year. And by repurposing existing towers instead of building new ones, Noya can lower the immense upfront expense that hampers other companies involved in what’s known as direct air capture.

Cooling towers circulate water to remove heat from an industrial process or a commercial building and dump it into the ambient air. They come in various shapes and setups: Think rows of fans in oversized boxes humming away on the rooftop of city buildings as part of HVAC systems, or the iconic hourglass-shaped concrete columns of nuclear power plants. The water they circulate can sponge up carbon dioxide from the atmosphere simply through liquid-air contact, but it does so only until saturated with gas.

Noya’s trick, a common one in the playbook of direct air capture, is to add a chemical blend to the water that binds carbon dioxide and allows it to be removed from the system, in effect wringing out the sponge over and over. “We’re just reacting away the dissolved carbon dioxide so that more carbon dioxide can be absorbed into the water stream,” said Noya co-founder and CEO Josh Santos. In Noya’s system, a plumbing tee diverts the main water line at the bottom tub of a tower into an exterior processing unit that diverts the carbon dioxide, stores it in pressurized cylinders, and returns the water otherwise unaltered. Noya expects the retrofit at the creamery to catch 0.55–1.1 tons of carbon dioxide per day, year-round.

Santos points out that Noya is hacking into the guts of a cooling tower without leaving much of a trace. “There’s barely anything we’ve changed about the actual cooling tower process,” he said. “It’s a very non-invasive installation for us to make to this cooling tower and something that can be bolted in and strapped on in line with it.” 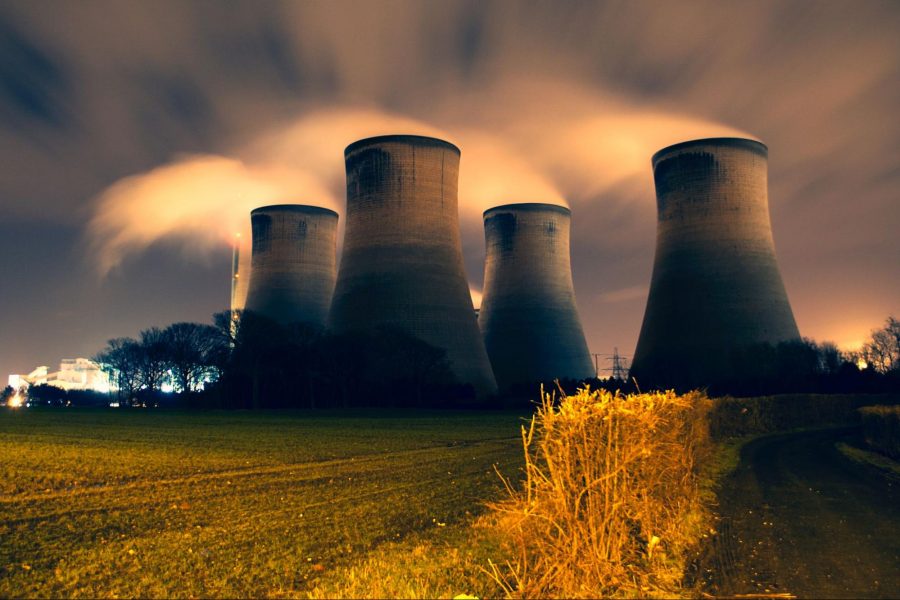 Cooling towers, including those on nuclear power plants, circulate water to remove heat from an industrial process or a commercial building and send it into the ambient air. If retrofitted for direct air capture, these towers could also remove carbon dioxide, a major contributor to climate change. The carbon dioxide would then be sold or stored. Photo credit: ATTRIBUTION GOES HERE

Having found a second use for existing cooling towers, Noya sidestepped much of the cost that typically saddles new-build direct air capture plants. Because atmospheric carbon dioxide is comparatively dilute — a sample of air with 440 ppm of carbon dioxide contains only 1 molecule of carbon dioxide for every 3,600 molecules in air — liquid-based direct air capture setups need to pump and blow lots of water and air through their piping. That requires massive gear and massive capital and construction time.

“In some cases you could spend something like $700 million to $1.1 billion to construct a full direct air capture process, and it could take as long as four years to actually build,” said Santos.

Cooling towers already provide much of the infrastructure needed for direct air capture, and they pump plenty of air and water during normal operations. “We can use them to tap into that spent energy they’re already using to move air and water into each other,” Santos said. “They do it for cooling, we do it for carbon capture, and the two can consist next to each other.

Noya installed the retrofit at no cost to Alexandre Family Farms and shares a small percentage of its revenue from selling bottled carbon dioxide to small businesses in the food and beverage industry. There the gas finds many uses, from carbonating drinks and decaffeinating coffee beans to drying fruits and cooling food in transit using dry ice, the solid form of carbon dioxide. COVID-19 endangered the carbon dioxide supply for food last year when it shut down ethanol plants that capture the gas as a by-product. After six to 12 months, the company hopes to fan out into larger markets.

Injecting air-captured carbon dioxide into drinks is a carbon neutral but not carbon negative end use, since the gas eventually escapes back into the atmosphere, so Noya is working on ways to permanently sequester the gas. As of now, it’s keeping the details under wraps.

Noya’s plan to store carbon dioxide makes business sense, but it also makes climate sense. To have a 50-50 chance of keeping global warming below the ceiling set by the Paris Agreement — 1.5 degrees Celsius by 2100 relative to preindustrial temperatures — the world needs to stay within its remaining carbon budget of 510 billion tons of carbon dioxide. The current rates of greenhouse gas emissions will blow that budget in less than 12 years.

Some overshoot is expected, and the recently issued Sixth Assessment Report from the Intergovernmental Panel on Climate Change states that 1.5 degrees Celsius scenarios typically assume the use of carbon dioxide removal and sequestration in addition to emissions reduction. The UN Environment Programme stated, in 2017, that “there are no scenarios available that can keep warming below 1.5° C by 2100 without removing carbon from the atmosphere via negative emissions technologies.”

Several companies apart from Noya are racing toward that goal with their own twist on direct air capture. A total of 15 plants were up and running worldwide as of 2020, together capturing some 9,900 tons of carbon dioxide per year, and more are on the way. On September 8, Climeworks, founded in 2009 by two Swiss entrepreneurs, is set to launch Orca, a plant in Iceland that’s designed to remove 4,000 tons of carbon dioxide per year and comes complete with on-site storage. Carbon Engineering, 11 years old and based in British Columbia, has begun designing two large-scale facilities in the US’s Permian Basin and in northeast Scotland, each with a carbon dioxide capture rate reaching up to 1 million tons per year. They’re due to be completed in the second half of the decade.

For now, Noya continues to refine its capturing process as the data from Alexandre Family Farms come rolling in. Meanwhile, the company is scouting for additional cooling towers. More than 100 businesses have already signed on to its waiting list, most of them commercial real estate firms in charge of buildings with HVAC systems. “We’re starting within that industry because there’s a nice mixture of willingness to take risks plus potential to produce high amounts of CO2,” Santos said.

“We need to cut emissions, and we need to do that immediately,” he added. “We will also need to pull CO2 out of the sky in the future, and that’s exactly the future that we’re building for.”