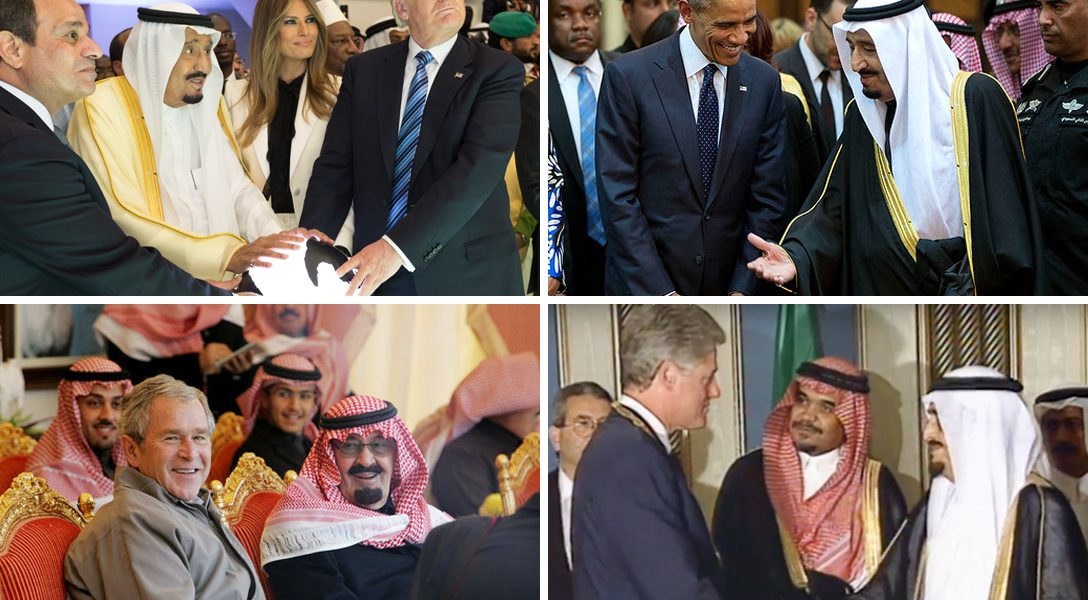 The Pentagon has just announced it is suspending operational training for all Saudi military students in the US in the wake of a deadly shooting in Florida.

With the revelations and remaining mysteries surrounding the group of Saudi nationals accused of complicity in the mass shooting at a Pensacola military base, there’s good reason to want to know more.

That includes understanding the broader context of Saudi Arabia’s delicate dance between being a close US ally and being the sponsor — overtly and covertly — of violence around the world, from the assassination of the Saudi-born journalist Jamal Kashoggi to the treatment of women in the kingdom, even to documented association with the 9/11 hijackers.

One way to find such context is to revisit these past articles and podcasts published by WhoWhatWhy.

As the US Flexes Muscle, Saudia Arabia Flirts with Old Enemies (October 21, 2019)

Saudi Arabia is bracing for impending turmoil that could be resolved — either by war or by peace. Russia is encroaching on US influence in the region. With only glimpses available of both negotiations and military preparations currently underway, economic developments could provide a rough time frame for the geopolitical expectations in Riyadh.

For 18 years now, investigative journalists have faced daunting obstacles in seeking answers about the 9/11 attacks. Of the 19 hijackers, 15 were Saudi citizens. Perhaps the greatest hurdle comes when asking about connections between the hijackers and high-ranking Saudi Arabian officials. Redactions, delays, denials, misdirection, and conflicting statements show a pattern — all of it in one direction and, intentionally or not, to the benefit of the Kingdom.

A federal judge’s ruling has raised hopes that we may better understand any possible ties between Saudi Arabia’s ruling family and the 9/11 hijackers — the vast majority of whom were Saudi citizens. Just ahead of the 18th anniversary of the attack, US District Judge William J. Zloch ruled that the FBI unlawfully withheld from journalists important parts of its own highly sensitive investigative report on the subject.

The Saudi government has actively worked to help Saudi nationals in the United States avoid the consequences of criminal acts they have committed. Despite an outcry from lawmakers, the federal government has seemingly abetted the Saudi authorities. Suspects in Khashoggi Murder Face Death Sentences as US Nods to Turkey (November 17, 2018)

Despite taking the highly unusual move of slapping sanctions on 17 Saudi officials allegedly involved in the murder of journalist and dissident Jamal Khashoggi, the Donald Trump White House appears to be doing all it can to protect its Saudi allies… Turkish officials perceive the US as a main ally of Saudi crown prince Mohammed bin Salman, who the Turks (and others including the CIA) believe was behind the murder. Was the Saudi royal succession a coup?

Veterans Duped Into Lobbying for Saudi Arabia (May 19, 2017)

Our podcast guest says that US veterans were tricked into speaking out against a new law allowing 9/11 victims and their families to sue the Saudi government.

What to make of the FBI’s highly unusual decision to trash a report from its own investigator into Saudi ties to the 9/11 hijackers? Russ Baker talks about a little-known but absolutely central explanatory story regarding 9/11.

A former US diplomat reveals odd goings-on at the US consulate in Jeddah, including him being pressed to approve visas for Saudi radicals.

Even the head of the Senate Intelligence Committee was intimidated when he asked tough questions.

This blockbuster investigation, from WhoWhatWhy’s early days, exposed links between the 9/11 hijackers and high levels of the Saudi ruling family.