Most everyone, it seems, recently awoke to the fact that the rulers of Saudi Arabia are not exactly the kindest, gentlest of folks.

One might say the same about other countries, but Saudi Arabia is truly extraordinary, by many measures. Its years-long bombing campaign in neighboring Yemen has produced what the UN called “the world’s worst humanitarian crisis” — with millions on the verge of starvation and an ongoing cholera outbreak seen as the worst in recorded history.

“Criminals” in Saudi Arabia — including those who challenge the regime, such as activists and journalists — are routinely flogged in public, beheaded, and even crucified. And while western journalists lauded the government’s recent decision to allow women to drive, women’s rights are still severely restricted.

The royal family itself is a massive kleptocracy, living in unimaginable splendor and bingeing on luxuries worldwide like drunken sailors.

Of course, the basis for their special treatment comes largely from the nation’s massive oil reserves, which have bought it astonishing impunity — even, it seems, when the lives of thousands of Americans are involved. One issue that always remains in the background but never addressed: the little-understood, though well-documented, relationship between the Saudi royal family and 9/11.

On the surface, the simple fact that 15 of the 19 hijackers were from Saudi Arabia should give one pause. Plus, a congressional report found that some of the hijackers “were in contact with, and received support or assistance from, individuals who may be connected to the Saudi Government.”

But we’re still not getting the whole story. Former Sen. Bob Graham (D-FL), who co-chaired the Senate Select Committee on Intelligence during 9/11, said in a recent interview:

The mystery is, over three administrations, why has there been this reticence to release information? … So we’ve gone for three presidencies, [with] no assertive effort from the White House to let the American people share the information that the government has, and form opinions as to who has responsibility for 9/11.

It certainly begs for further scrutiny by the major media outlets. Instead, the public’s attention — focused in 2001 on Afghanistan, the Taliban, Osama bin Laden, Iraq, Saddam Hussein, WMDs, and anthrax — has never been directed toward the Saudi royal-family connection.

In the wake of the global war on terrorism, Libya’s Muammar Qaddafi was taken out, and a “civil war” has been fomented by the US in partnership with Gulf State countries — including Saudi Arabia — to overthrow the government of Syria by arming “moderate rebels” (in a CIA operation code-named Timber Sycamore).

It all sounds vaguely like the secret plan that General Wesley Clark warned us about. He claims that, right after 9/11, he was privy to information contained in a classified memo. In it, were US plans to use the attacks on Washington and New York to justify America’s own project to remove governments in seven countries over five years: Iraq, Syria, Lebanon, Libya, Somalia, Sudan, and Iran.

Most, if not all, of these nations were seen as hostile to American (particularly corporate) interests and, as significantly, to Saudi interests.

While the government and the media may be reluctant to call out the kingdom for its links to 9/11, the families of victims certainly have not forgotten. Following the passage of a law in 2016 allowing families to sue Saudi Arabia, a class action lawsuit was brought claiming Saudi involvement; it is presently in the discovery phase.

Some years back, WhoWhatWhy conducted its own inquiry into the Saudi royal family–9/11 connection. We’re republishing it here because of its timeliness. 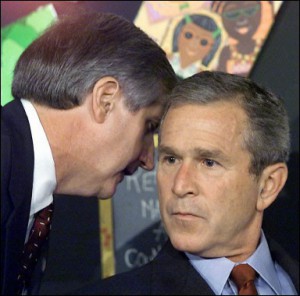 In court filings seeking to stave off a media Freedom of Information request, the FBI has stated that releasing documents relating to this issue will harm “national security.” As proof of the sensitivity of the matter, the FBI gave the judge a document dated April 4, 2002, in which the FBI states that its own inquiries “revealed many connections” between a well-connected Saudi family with a house in South Florida and “individuals associated with the terrorist attacks on 9/11/2001.”

WhoWhatWhy, in an original investigation, went deeper, and established that the owner of the house was  a prominent Saudi businessman who works directly for the Saudi prince most involved with aviation — including being the first Saudi who trained to fly planes in South Florida. You can read our complete story here.

Kudos to the Bulldog for filing the FOIA request, which unearthed that gem of an FBI submission. It was included in filings by Miami Assistant US Attorney Carole M. Fernandez, and was part of a sworn 33-page declaration from FBI Records Section Chief David M. Hardy. He stated that producing classified information related to the matter “would reveal current specific targets of the FBI’s national security investigations.” The purpose of the filings was to convince US District Judge William J. Zloch not to allow the FOIA suit to succeed.

The FBI’s practice of finding evidence tied to Saudi Arabia, then denying it had such evidence, then reluctantly admitting that it did (but only as a way of blocking still more disclosure) is telling. The apparent willingness of the FBI to brazenly lie and then reverse itself — seemingly with no consequences — is now beginning to look like standard operating procedure.

As WhoWhatWhy has demonstrated in articles about the Boston Marathon bombing, the FBI has been guilty of an astonishing array of disinformation, story reversals, unaccountable violence, and general misbehavior just in that one affair alone. See this, this, and this.

In the Boston bombing case, the FBI claimed not to know anything about the alleged perpetrators, Tamerlan and Dzhokhar Tsarnaev, then was forced to admit it had had direct contact with them and their family. It also initially claimed via leaks to mainstream media reporters that one of its officers shot and killed Ibragim Todashev, a figure connected with the Tsarnaevs, because he attacked them with a knife. Since then, the story has changed repeatedly and is now obscured by a thick fog of misdirection. We’ve pointed out many other changing aspects of the FBI’s story.

Fortunately for the FBI, almost the entirety of the media — from the corporate owned “mainstream” to purportedly outsider “alternative” news outlets and websites — have steered clear of the entire subject.

The recent FBI court filings were revealed by a Bulldog article published in conjunction with one mainstream outlet — the Miami Herald. Previous revelations that appeared in The Herald were generally ignored by the rest of the press, and we may reasonably expect the same disturbing indifference to the latest bombshell.