A federal judge’s ruling has raised hopes that we may better understand any possible ties between Saudi Arabia’s ruling family and the 9/11 hijackers — the vast majority of whom were Saudi citizens.

Just ahead of the 18th anniversary of the attack, US District Judge William J. Zloch ruled that the FBI unlawfully withheld from journalists important parts of its own highly sensitive investigative report on the subject.

Earlier, the FBI had declined to release to the Florida Bulldog — a nonprofit news organization which first broke the news about the ruling — key sections from records of the bureau’s probe of a South Florida-based Saudi family that apparently had ties to many of the 9/11 hijackers.

According to a 2011 Bulldog report (and to a Sarasota Herald-Tribune story published the same day), Mohamed Atta, the 9/11 plot leader, had visited the family of Abdulaziz al-Hijji several times, and phone records documenting communication over more than a year connected them to Atta and 11 other terror suspects. (See below for details.)

Two weeks before the 9/11 attack, the al-Hijjis suddenly left the area, abandoning cars, furniture, clothing, food, and medicine, and leaving the door of a safe ajar. Soon after, they all — including Esam Ghazzawi, the father of al-Hijji’s wife and owner of the home — flew to Saudi Arabia.

Connecting the Florida Family to the Saudi Royal Family

Through its own investigation, WhoWhatWhy discovered that there is a direct link between Ghazzawi and the ruling Saudi royal family.

Ghazzawi served as director of Eirad Management Company, the UK division of Eirad Trading and Contracting Co. Ltd., which among other things holds the Saudi franchise for many multinational brands, including UPS.

Esam’s brother Mamdouh, whose name shows up on public records associated with family properties in the US, was the executive managing director of the parent firm, Eirad Holding Co. Ltd. Eirad has connections to the US government via contracts. In 2008, records show, the State Department paid Eirad $11,733 for rental of facilities, presumably in Saudi Arabia.

The prince is a prominent member of the ruling Saudi royal family. He is a great-grandson of King Abdul Aziz (commonly referred to as Ibn Saud), founder of modern Saudi Arabia, and grandson of the current king.

A 2009 article in the publication Arab News covering an Eirad awards ceremony for outstanding employees features quotes from Prince Sultan and Mamdouh Ghazzawi as, respectively, Chairman and Executive Managing Director.

A 2017 article in the UK’s Telegraph described Eirad as “the company which managed the [royal] family’s properties, fleet of cars and vast collection of artwork.”

The link between the Ghazzawis and high ranks of the Saudi establishment reopens questions about the Bush White House’s controversial approval of multiple charter flights allowing Saudi nationals — including princes — to depart the US, beginning about 48 hours after the attacks, without the passengers being interviewed by law enforcement. This was after the identification of the majority of the hijackers as Saudis.

In addition, these revelations draw further attention to a web of relationships that include the long and close business, personal, and political ties between the Bush family and the Saudi royal family. 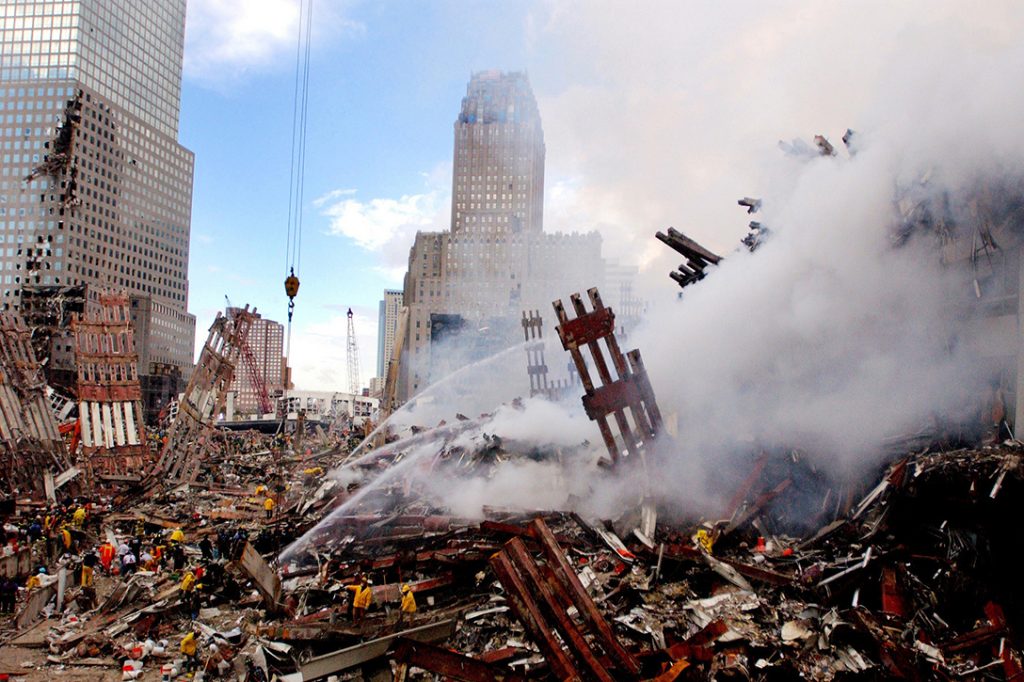 Fires still burn amidst the rubble and debris of the World Trade Centers in New York City in the area known as Ground Zero two days after the 9/11 attacks. Photo credit: Mike Goad / Flickr

The al-Hijji family left Florida on August 27, 2001, according to reports released in 2019 by the Florida Department of Law Enforcement. (The date had previously been given as August 30.) A counterterrorism agent and an administrator/security agent of the gated community got into the house and reported these findings:

There was mail on the table, dirty diapers in one of the bathrooms … all the toiletries still in place … all their clothes hanging in the closet … TVs … opulent furniture, equal or greater in value than the house … the pool running, with toys in it … The beds were made … fruit on the counter … the refrigerator full of food. … It was like they went grocery shopping. Like they went out to a movie … [But] the safe was open in the master bedroom, with nothing in it, not a paper clip. … A computer was still there. A computer plug in another room, and the line still there. Looked like they’d taken [another] computer and left the cord.

The al-Hijji family left in a white van and traveled to another Ghazzawi property in Arlington, VA; then — with Esam Ghazzawi — they went, via Dulles airport and London’s Heathrow, to Riyadh.

Records subpoenaed from the phone company linked calls dating back for more than a year to and from the house to several of the 9/11 hijackers, and other terrorist suspects, including senior al-Qaeda member, Adnan Shukrijumah,

Three of the four men who piloted planes on 9/11 lived within 10 miles of the [al-Hijji/Ghazzawi] family and attended flight schools nearby.

When these investigators turned over to the 9/11 Commission a large body of information on the hijackers that they themselves had acquired, the panel seemed uninterested.

“They did very little with it,” said former Sen. Bob Graham (D-FL), who served as co-chair of the congressional joint inquiry into 9/11, “and their reference to Saudi Arabia is almost cryptic sometimes. … I never got a good answer as to why they did not pursue that.”

The final 28-page section of the congressional report — which deals with “sources of foreign support for some of the Sept. 11 hijackers” — was entirely blanked out when it was released in July 2016. It was kept secret from the public on the orders of former President George W. Bush and is still withheld to this day, Graham said. (See additional revelations reported by WhoWhatWhy.)

Also kept from the public: Esam Ghazzawi and Abdulaziz al-Hijji had been on the FBI watch list — even before 9/11.

In response to the Sarasota Herald-Tribune article, the FBI issued a statement on September 15, 2011, claiming that the occupants of the house had been tracked down and interrogated, and that they were found to have no connections to the hijackers.

In March 2012, Lee Hamilton, former Indiana congressman and vice chairman of the 9/11 Commission, said, “We looked quite carefully at [possible Saudi involvement] and even sent investigators over there, and we found no hard evidence of any linkage to the hijackers. At the end of the day, you have to have hard evidence. Having said that, I will also say that despite our thorough investigation, a lot of questions about 9/11 remain unanswered.”

In a story published August 30, 2019, in Britain’s Telegraph, the FBI is quoted as saying, “At no time did the FBI develop evidence that connected the family members to any of the 9/11 hijackers … and there was no connection found to the 9/11 plot.’’

In court filings seeking to stave off a media Freedom of Information request, the FBI stated that releasing documents relating to this issue will harm “national security.”

As proof of the sensitivity of the matter, the FBI gave the judge a document dated April 4, 2002, in which the FBI states provocatively that its own inquiries “revealed many connections” between a well-connected Saudi family with a house in South Florida and “individuals associated with the terrorist attacks on 9/11/2001.”

Abdulaziz al-Hijji, who rented the Florida house from Ghazzawi and is married to Ghazzawi’s daughter, now lives in London, where he works for his country’s state oil company. In an email to the Telegraph, he made the following assertion:

I have neither relation nor association with any of those bad people/criminals and the awful crime they did. 9/11 is a crime against the USA and all humankind and I’m very saddened and oppressed by these false allegations.

He also denied that he left his home in haste:

No, no, no. Absolutely not true. We were trying to secure the [Aramco] job. It was a good opportunity.

He added the surprising claim that his wife and children followed him to Saudi Arabia a few weeks after he left. But that directly contradicts what the FBI found, including the disarray in the abandoned house, and the bureau’s assertion that the whole family left the country within days of abandoning the Sarasota house.

A former neighbor and close friend of al-Hijji, Tom Bello, told the Sarasota Herald-Tribune his Saudi friend did not raise any suspicion because of his “easy manner.” But then he remembered something significant:

He felt Americans came to their country to steal their oil and take their money. He said he did not like Americans because of what we did to his country.

He said: “How would you like it if we came to your country and did that?”