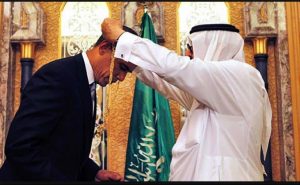 A top FBI official brazenly warned off the former chairman of the Senate Select Committee on Intelligence because of his persistence in pursuing connections between the Saudi royal family and the 9/11 attacks.

In a recent interview with WhoWhatWhy, Bob Graham, the former head of the Senate committee, co-chair of a congressional investigation of 9/11, and two-term governor of Florida, described a remarkable interaction with a “very senior” FBI official around the time of the tenth anniversary of 9/11.

Two journalists for an online investigative journal had just revealed a long-suppressed federal investigation of a Saudi family, living in a gated community in Sarasota, Florida, who had fled in great haste just before the 9/11 attacks, leaving their possessions behind. Solid evidence, including leads developed by WhoWhatWhy, established ties between that Saudi family, two of the hijackers, and a powerful Saudi prince whose father has since become the king of Saudi Arabia. (For information on close historical ties between the family of George W. Bush, who was president at the time of the attacks, and the Saudi royal family, see my book Family of Secrets.)

Graham immediately took interest in the Sarasota angle, in part because his own congressional investigation had found other important Saudi links to 9/11. Information about those links remains unknown to the public, because 28 pages of his report were redacted by the Bush administration. Since then, Graham has been actively campaigning to get the Obama administration to order those pages declassified.

Why won’t the Obama administration declassify the pages of Graham’s investigation?

Back in 2011, when Graham began making public statements about the Sarasota Connection, he got the FBI’s quick attention. What happened next was the subject of a brief New York Times article that appeared earlier this month. But the story of Graham’s encounter with the FBI is so extraordinary that we thought it deserved more scrutiny, so we asked Graham to elaborate on it for WhoWhatWhy.

BG: I have a daughter who lives in Great Falls, Virginia, and my wife and I had flown up to Dulles to be with her for Thanksgiving. And as we got off the plane, a couple of FBI people met us, said they would like us to attend a meeting. So we went. The FBI has an office at Dulles, and there were two FBI people and an attorney from the Department of Justice. And basically, we spent an hour—with them trying to convince me to forget this, that it was a dead end, that all that was needed to be learned about it had already been learned. The phrase ‘get a life’ was sort of my summary of that conversation.

RB: Then it’s even a better story than the way Carl [Hulse of the Times] wrote it up.

BG: Yeah. And then, I had been able to read a couple of files of materials on Sarasota, and I pointed out where their public statement was not consistent with what was in their own classified files. And the FBI officer said: “Well, that was a matter of context, that there was other information which refuted the statements which were contained in the investigative officer’s report.”

So I said, “Well, can I see what that other information is?” And he said “yes” and we set a date for the week after Thanksgiving.

And when I went to the FBI office at the scheduled time, that same agent who [was at the meeting at Dulles] was there and he said: “Your meeting here has been canceled, is not going to be rescheduled, and incidentally, I know you’ve been trying to contact the agent who wrote the report, and I have told him not to talk with you.”

And that was the last time I met with a high-ranking FBI official.

RB: Now, without putting you too much on the spot, can you indicate how high a level we’re talking?

We know that the FBI’s own internal records confirm a connection between that Saudi family in Sarasota and the alleged 9/11 hijackers, who trained to fly planes nearby. We also know that the FBI has quietly notified Congress that its own agent who described the connection was essentially making stuff up. That is a startling claim in itself—especially in light of the fact that other sources confirm the Sarasota Connection.

This raises a serious question: If, as it appears, the Federal Bureau of Investigation is suppressing important information about the biggest terror act in our history, why would they do that? We have seen similar behavior in relation to the Boston Marathon Bombing, the Oklahoma City Bombing, TWA Flight 800, and other violent incidents attributed by federal authorities to isolated renegades or some accident. And Graham is not the only investigator who has been ordered by FBI personnel to stop digging into such incidents, stop talking about them, stop asking questions.

The determination to block disclosures about the Saudi-9/11 connection has been consistent through both Republican and Democratic administrations—which suggests that the reason for the gag order transcends the interests of the current occupant of the White House or his predecessor. Indeed, both Bush and Obama signed executive orders keeping the pages of Graham’s report dealing with the Saudis classified.

Since this kind of stonewalling is obviously dangerous for a democracy, it’s fair to ask: what overriding national interest is dictating this fierce opposition to transparency on such a crucial issue?

Bob Graham has questions about that. As should we all.