Even though a Florida news site and the FBI itself linked different 9/11 hijackers to a prominent Saudi family living in Sarasota, the Bureau’s review commission on the attack said there is no evidence such a connection existed. Now, as the discussion about the infamous “28 pages” is heating up, the news site is seeking answers from the FBI on how it arrived at its conclusion.

The not-for-profit investigative news website Florida Bulldog filed suit under the Freedom of Information Act against the Department of Justice and the FBI seeking records about the findings of the FBI’s secretive 2015 9/11 Review Commission report. The FBI’s report, in part, claims to refute explosive evidence uncovered by The Bulldog that Mohamed Atta and other 9/11 hijackers had multiple contacts with a prominent Saudi family living in Sarasota.

The family left the country abruptly two weeks before the attack, having abandoned all manner of personal items like clothing, furniture, and cars — even food was left in the refrigerator.

The connection was first uncovered by The Bulldog’s Dan Christensen working with investigative author Anthony Summers, who determined through multiple sources that Atta and others routinely visited the upscale residence in Sarasota.

Part of the evidence they uncovered in their years long investigation included a 2002 FBI investigative report obtained through the Freedom of Information Act (FOIA). The FBI report noted “many connections” between the Saudi family and “individuals associated with the terrorist attacks on 9/11/2001.”

(Building on The Bulldog’s investigation, WhoWhatWhy found even more explosive evidence linking the Sarasota family who fled the country two weeks before 9/11, to members of the Saudi royal family.) 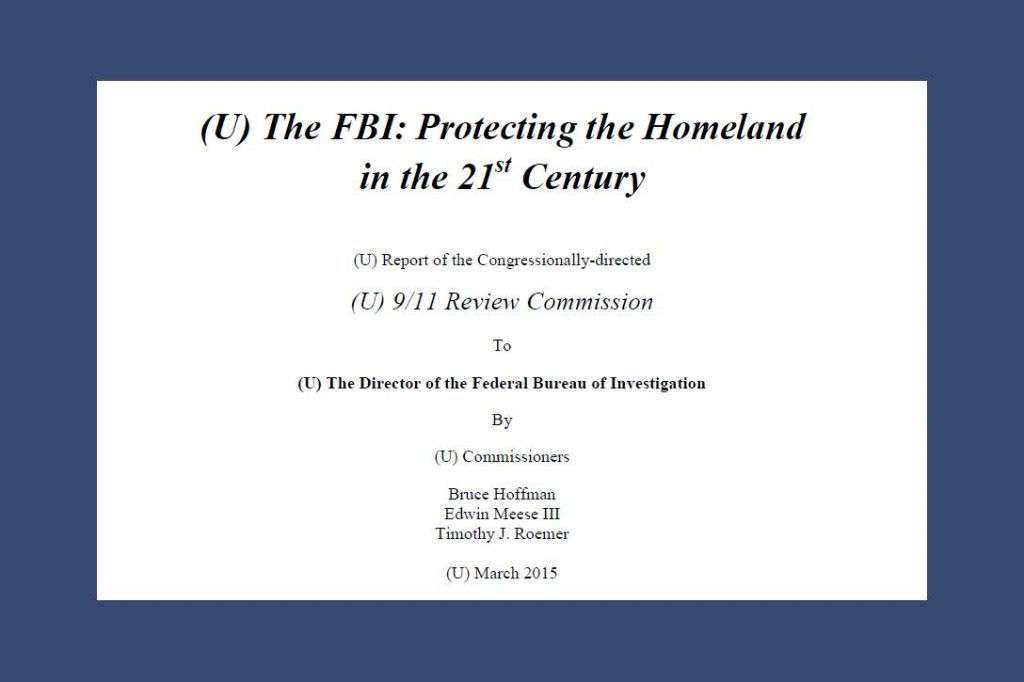 Ironically, the FBI’s Review Commission report takes particular aim at its own 2002 investigative report, declaring the claims in it “unsubstantiated” and that the report was “poorly written and inaccurate.”

Notably, the FBI only acknowledged this part of their investigation, even to congressional investigators, after The Bulldog first revealed these connections. The FBI has consistently maintained that they found no link between the Saudis living in Sarasota and the 9/11 hijackers — a determination supposedly strengthened by the weight of this Review Commission’s findings.

The Bulldog’s lawsuit seeks to obtain the underlying records used as the basis of the Review Commission’s finding that the 2002 FBI report was wrong.

According to the complaint written by The Bulldog’s attorney Thomas Julin, the “9/11 Review Commission’s finding is false, unsupported by credible evidence, and intended to discredit truthful facts that were accurately reported in the April 16, 2002 FBI report.” Notably, the Review Commission does not address any of the other corroborating evidence cited by The Bulldog in its reporting.

FBI: if you don’t believe us, just ask us

There are also glaring problems with the makeup of the 9/11 Review Commission itself.

Not to be confused with the 2004 9/11 Commission Report which sought to understand the “intelligence failures” which led to the attacks — then make recommendations —  the recent 9/11 Review Commission’s ostensible purpose was to perform an “external review” of how well the FBI implemented those recommendations. It was also tasked with assessing any new evidence which has surfaced since — including the evidence publicized by The Bulldog.

It turns out the Review Commission was not really “external” at all. The Commissioners were in actuality “guided by the FBI” and they “relied heavily for information on the Bureau,” according to Christensen.

Originally envisioned as an independent body with the power to investigate and hold public hearings, a commission in that form couldn’t get enough support in Congress. Instead, a sort of FBI self-investigation arrangement was ultimately tucked into a large appropriations bill — any “mention of public hearings, subpoena power and legislative control had been removed,” Christensen reported.

Even worse for any semblance of independence, FBI Director James Comey essentially hand picked the commission’s three members — former Attorney General Ed Meese, former 9/11 Commission member Tim Roemer and Georgetown University professor Bruce Hoffman — all of whom were paid by the Bureau itself making them “de facto FBI employees,” as Christensen points out.

So, what does it all mean?

“We suspect that if the records are produced they will show that the 9/11 Review Commission did not have a valid basis to attack the accuracy of the April 16, 2002, FBI report,” The Bulldog’s attorney told WhoWhatWhy via e-mail.

The big question of course is: Why would the FBI discredit its own internal report, then completely ignore any and all corroborating evidence documented by The Bulldog’s reporting?

Could it have anything to do with the “28 pages” which, we are told, document Saudi funding of the 9/11 hijackers? Is it possible the Sarasota connection contradicts what’s in those 28 pages and needs to be written out of the script?

Notably, Tim Roemer, former 9/11 Commission member and member of the 2015 Review Commission recently came out in support of releasing the 28 pages. However, according to CNN, he “pushed back on Saudi royal involvement in the attacks,” during a congressional hearing this past May.

“In the 9/11 report, we did not discover high-level” involvement of any Saudis, he told hearing members.

Is the 9/11 Review Commission’s deeming the Sarasota connection “unsubstantiated” just another attempt at shutting the door on “high-level” Saudi involvement?