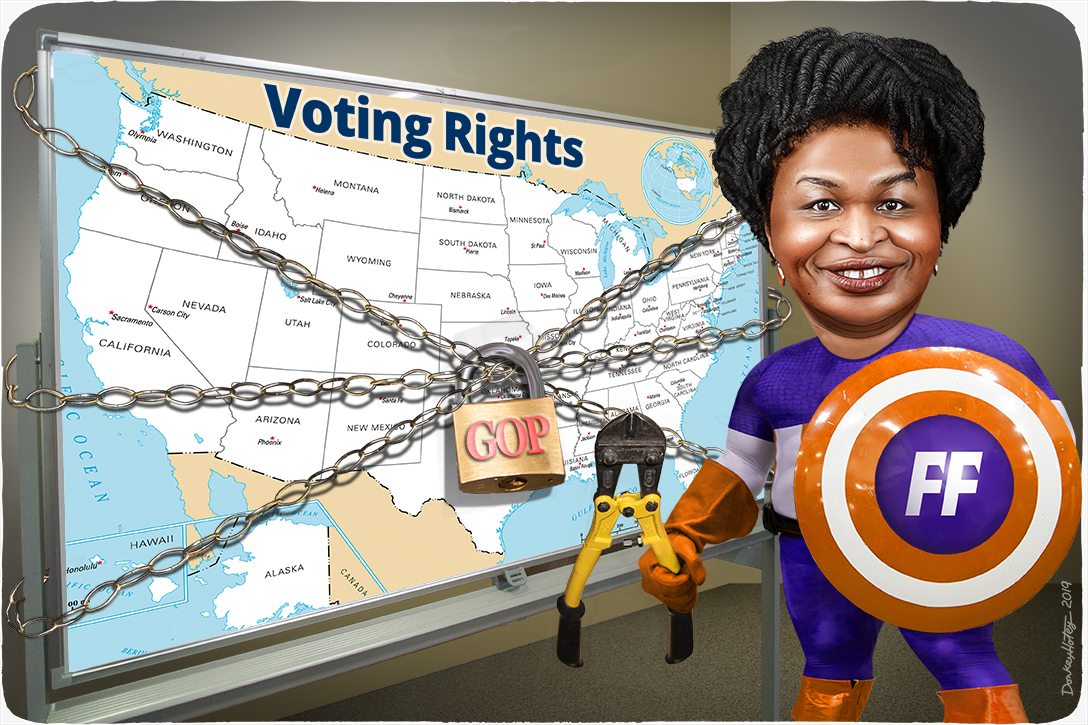 When Stacey Abrams “lost” Georgia’s 2018 gubernatorial election, a lot of Republicans were probably breathing sighs of relief. While the result was close, their strategy of rigging the state’s election laws to keep minorities from voting had paid off once again.

But that “victory” may turn out to be hollow. Yes, in the short run they denied Abrams the opportunity to become the country’s first female African American governor. In the process, however, they created a political force that could be the key in close races across the country in 2020.

After her narrow “defeat,” Abrams could have used her name recognition — and the widely held belief among her supporters that she was robbed of the governorship — to run for the Senate or even launch a long-shot bid to become the Democratic presidential nominee. Instead, she decided to fight for fair elections.

And that could pay dividends for Democrats up and down the ballot throughout the country — and even affect the presidential race in states where the result is expected to be particularly close.

Georgia’s gubernatorial election last year gave Abrams the motivation, the platform, and the experience to fight back. And that’s precisely what she is doing now — with the goal of allowing Democrats to compete on a more even footing in 2020 by reversing the effects of anti-democratic election laws passed by Republicans in states across the US.

Her group, Fair Fight, is launching an unprecedented effort to combat GOP voter suppression in 20 battleground states. In addition to spending millions of dollars on this project, Fair Fight will work with state parties and allied groups to raise the money necessary to make sure that eligible Americans can register to vote, actually cast a ballot, and have confidence that their vote is counted.

Nobody knows better than WhoWhatWhy that Abrams is the right person to spearhead such an effort. Loyal readers will recall that we sent three reporters to Georgia to cover her race because we believed that it would be ground zero for election shenanigans. Sadly, we were right.

In dozens of stories and videos, we documented how Republicans had put a thumb on the scales of democracy to make it more difficult for those people to vote who were most likely to support Democrats.

The result was that Brian Kemp — who had served as Georgia’s secretary of state for eight years and put in place many of these anti-democratic measures — edged out Abrams and became governor.

To get the outcome they desired, Republicans had to employ many of the tricks from their voter suppression playbook — purges of “inactive” voters, direct match voter registration, polling place closures, rejecting absentee ballots, making sure that some sites have long wait times, voting processes tailored to keep African American turnout low, and many more — which means that Abrams got a first-hand look at the obstacles that candidates face where the GOP controls the electoral process.

But her experience, her stature as a prominent victim of voter suppression, and the funding her group provides are not the only reasons why Fair Fight has a chance of succeeding.

In the past, only a handful of news outlets, including WhoWhatWhy, dedicated a significant share of their coverage to election integrity issues. However, thanks to Russian meddling in the 2016 election, the findings of the Mueller report, and increasingly aggressive Republican tactics to suppress the vote, concerns about the state of democracy in the US are going mainstream.

Major media outlets are finally recognizing how big a problem the attack on democracy is and how wide-ranging the consequences of not holding secure and fair elections are.

All of that — as well as the efforts of groups like the ACLU, Common Cause, the League of Women Voters, and many others to fight disenfranchisement — may just make a difference in 2020.

It would be true poetic justice, and the ultimate revenge, if the work Abrams and Fair Fight do over the next 15 months results in fairer elections, and prevents other candidates from being robbed as she was.