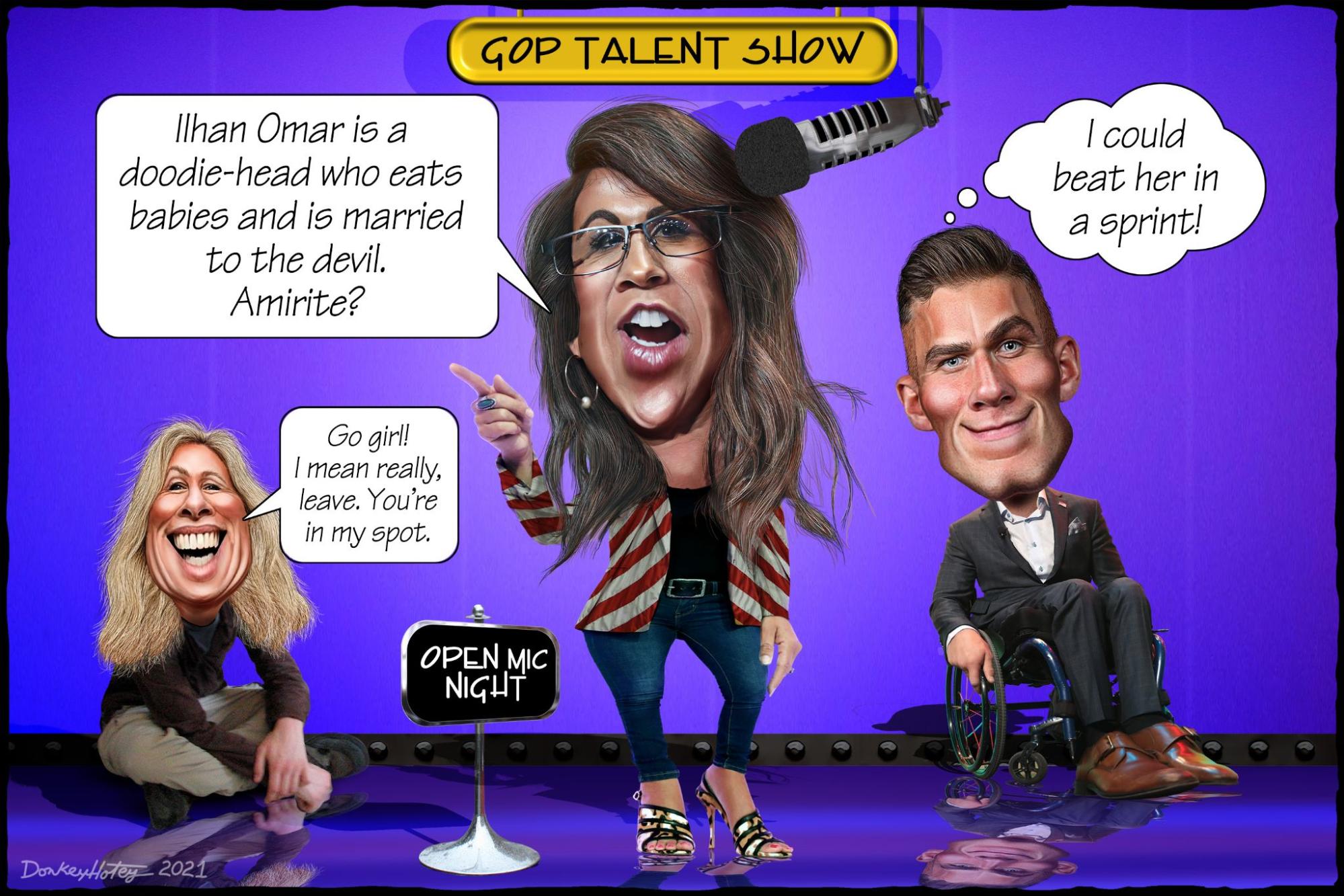 The Sorry State of the GOP’s Performance Artist Caucus

While we routinely criticize and ridicule the rich and powerful, and even though the rich and powerful don’t like to be criticized and ridiculed, we don’t often have to apologize in this space. Sure, there was that one time when we wrote a 1,200-word column on how Fox News is systematically destroying America for profit, and they sent us an email about it. Since they had no response to the substance of the article, which was that Fox was getting rich off knowingly manipulating gullible idiots, some corporate bigwig demanded that we change “several inaccuracies” in the piece, which resulted in a correction (below) and a follow-up article worth reading to understand how this “news” network tries to bully those who call it out.

Apart from that, there has been no need for us to say that we are sorry… until now. Because we do owe an apology to Rep. Lauren Boebert (R-CO).

Making your mark as a first-term member of Congress is tough, and our coverage has simply not been fair to Boebert and her efforts to get stuff done in Washington.

From the moment she was elected (and even well before that), she has worked hard to get the attention (and campaign donations) of the GOP base with outrageous statements and stunts, show the rest of the world that she is a terrible person, and demonstrate that she is utterly disinterested in actually doing her job.

In our defense, it was an honest mistake. The Republican Caucus is full of people who are utterly disinterested in doing their jobs and instead seem intent on merely performing a role for a base that lives in the fantasy world that right-wing politicians and media outlets have created for them.

Boebert’s problem, and that of many of her colleagues, is that, to appease this huge segment of Republican voters, it’s no longer enough to just be a white supremacist or a xenophobe, to only reject science or deny reality, to merely be a gun nut, or solely to promote the Big Lie or to have supported former President Donald Trump’s attempted coup.

To stand out in the modern GOP, you have to do it all… and then some.

In our view, she simply had not done enough to distinguish herself. Sure, she has played footsie with QAnon, had some run-ins with the law, attempted to enrich herself with campaign donations, and seems to be a pretty awful human being in general. And, to be fair, we ridiculed Boebert last month for saying that Americans don’t deserve parental leave because she had given birth in a truck.

But those things really only put her on par with a few dozen other Republicans — and certainly not in the same category as GOP superstars like Marjorie Taylor Greene (GA) and Paul Gosar (AZ).

However, Boebert had a big week, and now her star is rising.

Maybe she stepped up her game because she read our satirical letter from House Minority Leader Kevin McCarthy (R-CA) and thought it was the real thing. The Colorado lawmaker (and we use that term loosely because she has no interest in making any meaningful laws) certainly seemed to have followed our advice:

Also, feel free to talk about “The Squad.” Our white male base is threatened by women of color and will believe anything bad you say about them.

In any case, with her Islamophobic attack on Rep. Ilhan Omar (D-MN), she finally got the national attention she has been craving. And, unlike Gosar, who fantasized about murdering Rep. Alexandria Ocasio-Cortez (D-NY) directly, Boebert had her supporters do the dirty work for her.

Then she not only jumped into the GOP sweepstakes for acquitted killer Kyle Rittenhouse’s services but did so by challenging wheelchair-bound Rep. Madison Cawthorn (R-NC) to a footrace.

That really got our attention. Because if you can make Cawthorn — a serial liar who is not only accused of sexual harassment but also appears to be one of the dumbest people to ever have served in Congress — look like the good guy, then you might be ready for bigger and better things in the GOP.

That being said, there are some things working against Boebert: Most importantly, she will never surpass Greene, who is in a league of her own when it comes to ridiculous and crazy.

In addition, the entire Republican caucus is now a circus. A few years ago, Boebert would have undeniably been one of the wackiest Republicans in Congress. Now, she has to make up some story about Omar to make the news.

Finally, House Democrats seem unwilling to play ball. While House Speaker Nancy Pelosi (D-CA) is clearly exasperated with the daily GOP shenanigans, she is also very aware of the game Republicans are playing.

“There’s a judgment that has to be made about how we contribute to their fundraising and their publicity on how obnoxious and disgusting they can be,” Pelosi told Democrats in a closed-door meeting this week.

A much more effective (and hilarious) punishment for Boebert, Greene, Gosar, et al. would be to ban them from social media until they can pass a citizenship test or a Bible quiz. At least that would be entertaining

While Greene and Gosar were kicked off their committees, Pelosi seems much less willing to do Boebert the same favor.

Because, let’s not kid ourselves, removing a Republican from a House committee is not a punishment, it’s a gift. First of all, members of the Performance Artist Caucus don’t do any legislative or committee work to begin with. Therefore, kicking them off these House panels is like suspending a high school senior from class on Skip Day.

More importantly, however, the “punished” Republicans then get to go on Fox and every other right-wing news outlet and complain about being “canceled” for “standing up for America” or some such nonsense. That boosts their national profile and undoubtedly leads to a flood of campaign donations.

A much more effective (and hilarious) punishment for Boebert, Greene, Gosar, et al. would be to ban them from social media until they can pass a citizenship test or a Bible quiz. At least that would be entertaining.

In reality, however, this is no laughing matter. Instead, it is deeply troubling.

There have always been weirdos, bigots, and morons in Congress. This is not something that can be avoided because a party isn’t responsible for whom voters choose to represent them. Maybe the party could have tried harder to field better candidates in the primaries or supported the sane alternatives a bit more, but ultimately, a representative does exactly what the name indicates: They represent their district. And, if that district is full of racists who believe the moon is made of cheese, then they’ll send a racist idiot to Washington if that is an option.

In recent years, the number of lawmakers who are unfit to serve has increased rapidly. One of the reasons is the ongoing radicalization of the Republican Party. The other is that extreme gerrymandering has reduced the number of competitive seats up for grabs, which leads to more extreme candidates since the primary becomes the election that decides who will go to Washington.

And this is where the GOP fails: Republican leaders are doing absolutely nothing to rein in the many extremists within their own ranks. Boebert’s Islamophobic attack against a colleague is a perfect example.

She absolutely does not have to worry about any repercussions from her own party because any attack on Democrats, no matter how vile, is fair game now. Case in point: McCarthy only stepped in when Republicans were beginning to fight among themselves.

And that is precisely why we are going to see this kind of thing over and over again because, until there is some accountability from the GOP, there is simply no downside for these trolls.