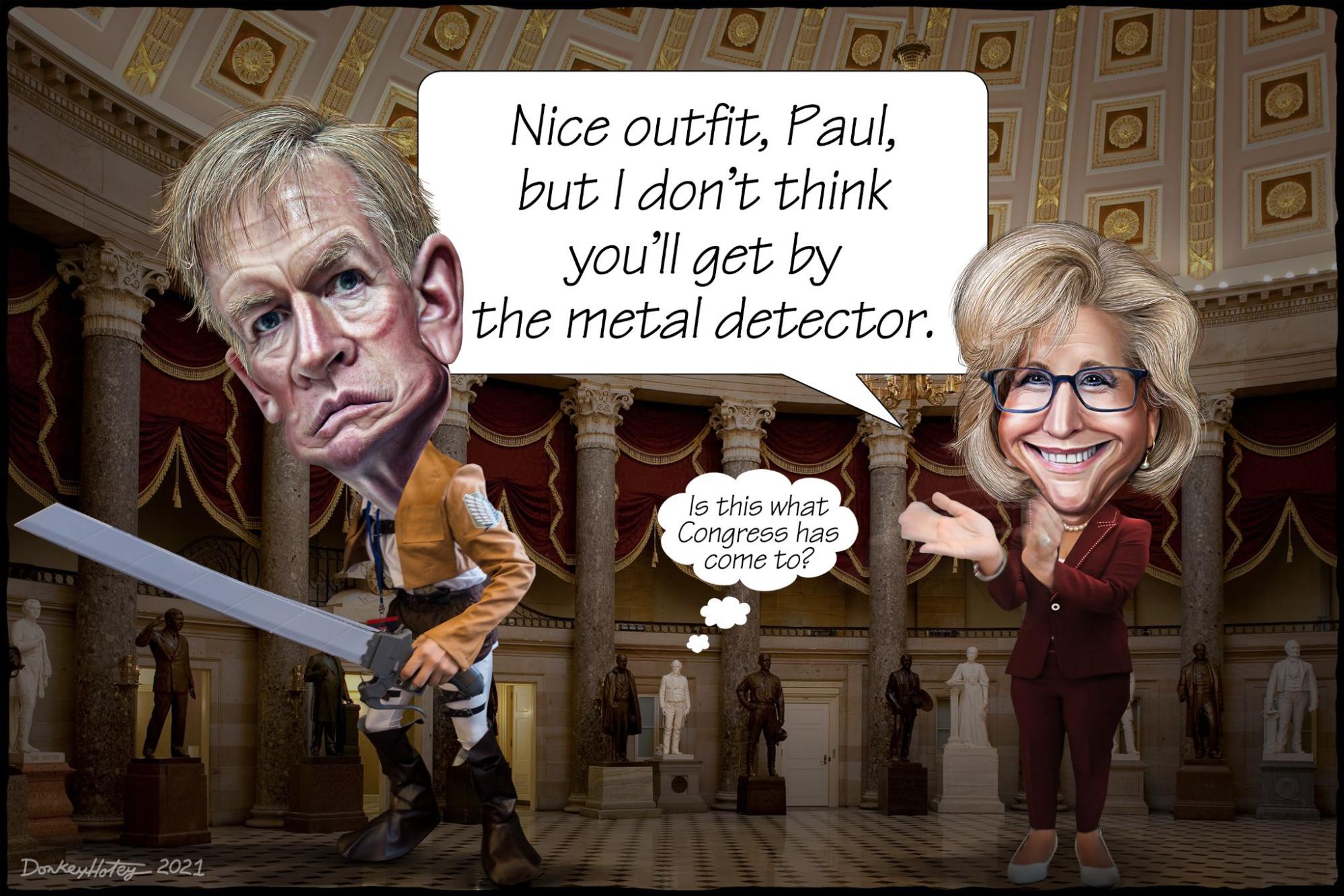 McCarthy to GOP: Keep Your Fantasies of Killing AOC to Yourselves

With Republican efforts in full swing to make the next election as undemocratic as possible (in order to make the next Congress as un-Democratic as possible), and public sentiment tilting toward them, the only thing they have to worry about right now is their own representatives acting too crazy and reminding voters what the GOP actually stands for.

As we have seen this week with the House’s censure of Rep. Paul Gosar (R-AZ), that can be a problem for a party whose few remaining sane members now make up its fringe.

To keep things under control, House Minority Leader Kevin McCarthy (R-CA) sent a “Dear Colleague” letter to his caucus in order to remind them how to behave and what is at stake. We have exclusively obtained the text of this letter, which you can find below.

Following the events of this week, I know there is some confusion within our caucus as to what members can and cannot do and say.

As you know, being a Republican is not easy these days. Our woke Democrat counterparts will not even let us illustrate our fantasies of killing them. In addition, the media tries to make us look bad for commonsense positions such as wanting to deny parental leave for all Americans on the basis of one of us having given birth in a truck, or suggesting that killing protesters is a way of helping the country and should be rewarded.

It is somewhat understandable that some of our members have begun to crack under this pressure and resorted to outlandish actions, such as voting for legislation that invests hundreds of billions of dollars in US infrastructure, claiming that Joe Biden won the 2020 election, opposing the patriots who fought for President Trump on January 6, or even pretending that our Dear Leader was somehow responsible for what happened that day (which, I want to stress, was either not so bad or, if it was, then it was organized by ANTIFA).

Needless to say, those who have strayed from the path will be dealt with — either in primaries, by forcing them into retirement, by no longer recognizing them as Republicans, or by kicking them off their committees.

These are appropriate punishments, and they accurately reflect where our caucus stands. To reiterate: We are against stripping Republicans of their committee assignments if they threaten a Democrat, but we are in favor of doing so if they committed the much graver offense of supporting the infrastructure bill.

However, since this may be confusing for some members, this letter serves as clarification of acceptable behavior for House Republicans.

First of all, before we delve into specifics, I want to stress what I said earlier this year: The GOP is a big tent, and “everyone’s invited in”… after we purge the aforementioned unwanted elements from our party. Whether you believe that Trump won or that Biden stole the election; whether you are an avowed white supremacist or simply want to preserve our European roots and Judeo-Christian values; whether you are pro-life or support the death penalty, there is a place for you in the modern Republican Party.

Or, as one observer put it during our patriotic rally on January 6: “Preppy looking ‘country club Republicans,’ well-dressed social conservatives, and white Evangelicals in Jesus caps were standing shoulder to shoulder with QAnon cultists, Second Amendment cosplay commandos, and doughy, hardcore white nationalists.”

So, if you want to remain a member in good standing of this amazing coalition, please follow the Do’s and Don’ts outlined below:

The topics we want you to focus on are CRT and socialism. As you know, we have a major edge among uneducated voters, and these are two things they do not understand but are scared of.

That means we can even use them to distract from other issues. For example, as you know, a range of Democrat policies are actually very popular. So, if somebody asks you about your position on getting billionaires to pay taxes, just say, “Well, that’s CRT for you.” Or, if somebody brings up background checks for military-style weapons, simply respond with, “The socialists would love that.”

Conversely, I suggest staying away from nuanced takes. Our voters don’t care for those. If you can, make it a two-word slogan.

Also, feel free to talk about “The Squad.” Our white male base is threatened by women of color and will believe anything bad you say about them.

Topics you should stay away from include anything suggesting Biden won the election — like calling him “President Biden” — and dubious theories such as the existence of climate change or evolution. Our voters simply don’t care for these things.

Speaking of our voters: While they mistrust science, they do trust QAnon… and I know many of you are big fans, too. As with any voter fraud theory your supporters float (such as bamboo-laced Chinese ballots), just nod along to anything they say.

For example, if somebody brings up a Democrat pedophile ring run out of the basement of a pizza restaurant that doesn’t have a basement, you might respond with, “I wouldn’t put anything past the Clintons, sir.”

Or if a supporter wants to talk about JFK Jr. rising from the dead at Dealey Plaza to help reinstate President Trump, you could say: “If anybody can do it, then President Trump can, ma’am.”

However, I caution you not to say these things out loud or put them in writing. So, if you believe in Jewish space lasers causing forest fires, keep it to yourself.

Also, I know some of you are itching to bust the January 6 patriots out of prison yourselves, but please exercise restraint. Let’s keep in mind that, less than a year ago, we failed in our coup attempt. Fortunately, the American people are quick to forget these things, and the press has largely moved on, but let’s not remind them of our role with a jailbreak.

I know some of these things are difficult for you — especially those members of our caucus who are much more performance artists than legislators. I get it; just look at my eight-hour stunt earlier this week.

I also understand that some of you may ask why you should follow these rules. After all, unless you criticize President Trump, we will let you get away with just about anything. In fact, you will even be rewarded.

That’s all true, of course. However, this is not about any of us doing or saying the things we believe. We are in a unique position to retake Washington at the ballot box next year… and who would have believed this to be possible after we failed to retake Washington by other means this year?

Our brave state legislators are passing new voting rights laws all the time that will keep the wrong people away from the polls, and they are heroically redrawing House districts to ensure that we are strong favorites to win the midterms.

In other words, even if a minority of people votes for us, we are still expected to get a majority in Congress. But we have to stay out of the headlines to avoid spooking our soft supporters.

So, let’s not rock the boat, and don’t make the wrong kind of news. Follow the example of our Senate colleague Ted Cruz. After President Trump insulted his wife and accused his father of having a hand in killing JFK, he still helped lead the fight on January 6 and, just last week, he valiantly took on Big Bird.

In closing, let me just say that you should let the events of this week be a lesson. Yes, one of our own was maligned for the simple act of fantasizing about murdering a colleague. But, as a caucus, we stuck together and had his back. His family may have abandoned our friend Paul Gosar and called him a white supremacist, but we did not. Because Paul is one of us.

PS: Ahead of the next vote, we will provide members with rotten fruit to throw at that traitor Liz Cheney.

Editor’s Note: This is satire. However, we are saddened that it rings all too true. It is extremely troubling that nearly the entire Republican caucus chose to stand behind Gosar. In any other workplace making a video in which one employee fantasizes about killing another would surely result in termination. For today’s GOP, however, it’s just another day in the office.

Sadly, death threats against the real and perceived political opponents of Trump (including in his own party) have become the new normal. As disturbing as that is, we fear that it is only a matter of time until one of his supporters takes things a step further.