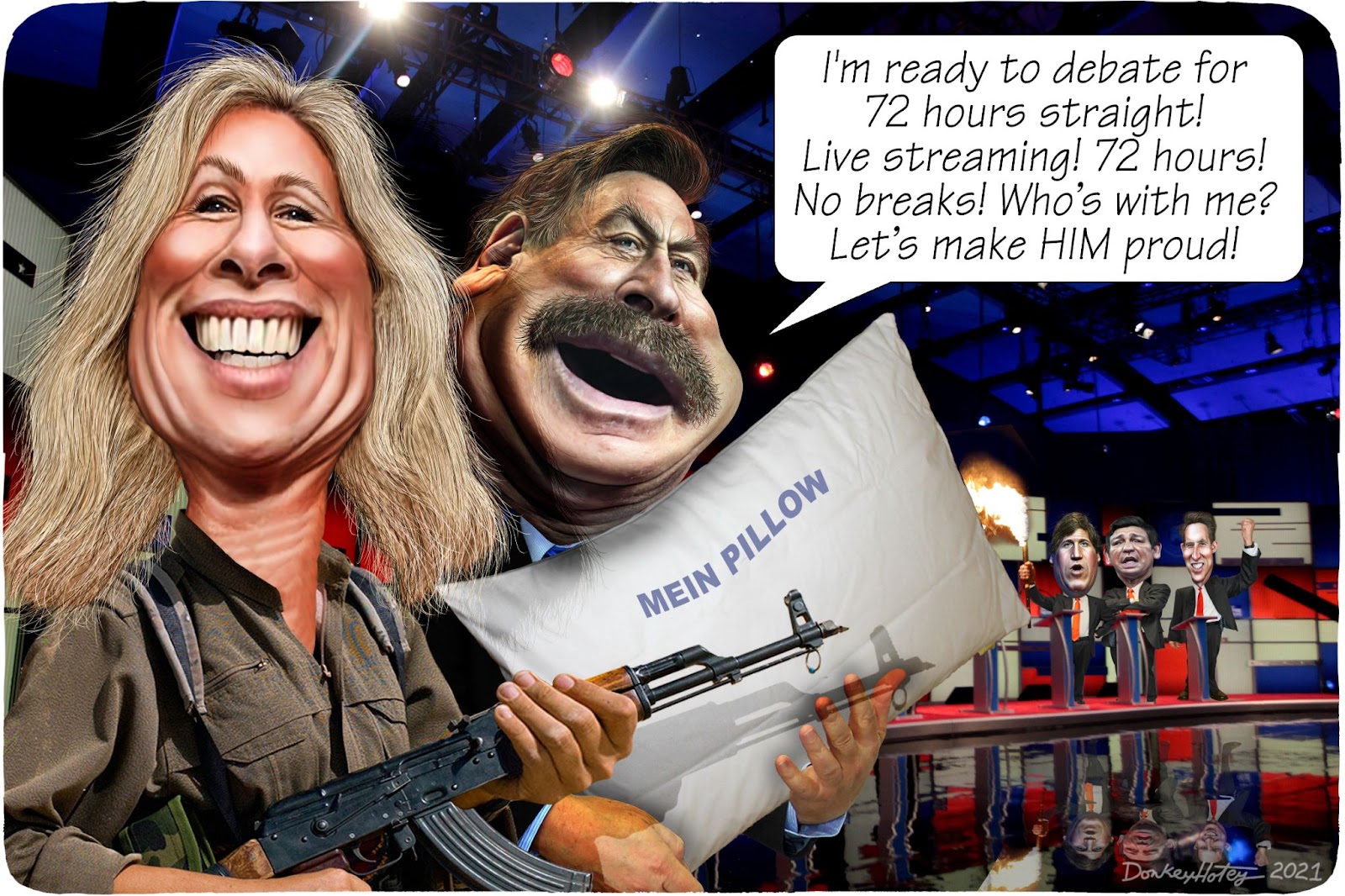 Proving their Trumpiness will be the key to success for candidates in the 2024 Fox News debates. Photo credit: DonkeyHotey / WhoWhatWhy (CC BY-SA 2.0) See complete attribution below.
Cartoon Elections Opinion

Rep. Marjorie Taylor Greene (Q-Crazy) is heading to the Iowa State Fair, traditionally a must-visit stop for any politician with White House aspirations. A few years ago, this wouldn’t have been news. After all, the fair attracts all kinds of kooks and strange acts. This year, for example, it features the “chainsaw artists Gary Keenan and TJ Jenkins,” the “Rubber Chicken Show with Greg Frisbee,” and the band “Hairball.” So, what’s one more weirdo who could not possibly be taken seriously as a potential presidential candidate, right? Right?

Sadly, things have changed. Donald Trump has proven that bigoted carnival barkers do not just have a chance to compete for the Republican nomination — they are favored to win it.

In fact, it seems as though the GOP is headed for a full-on sprint to the bottom. While Trump was the outlier in 2016, it is likely that principled conservatives — or even anybody who is reasonably sane — need not bother to run in 2024. The base clearly has no appetite for principled or sane.

That got us thinking: Assuming that justice has been served, and Trump won’t run because he is serving time for tax evasion, sexual assault, obstruction of justice, trying to overturn an election, inciting a deadly riot, etc., who would be the favorites to take his mantle, and what would the primaries look like?

It certainly seems as if anyone who wants a chance in this clown show would have to out-Trump their competition. That means referring to domestic terrorists as “tourists” and “political prisoners,” casting doubt on the outcome of the last election, and being willing to sacrifice countless American lives to a deadly virus just to own the libs. In other words, Greene will fit right in.

That’s clearly bad for the country, but the media will love it. After all, Trump has shown that delusional, narcissistic liars are great for ratings. With all of that in mind, we imagined what the first 2024 GOP debate would look like — and who may emerge victorious — so buckle up and get ready for a glimpse into a future that is as likely as it is frightening.

Mar-a-Lago, FL – Rep. Marjorie Taylor Greene (R-GA) was the clear winner of the first GOP presidential debate of the year. After a slow start, she dazzled the crowd with a combination of incompetence, untruthfulness, and baseless conspiracy theories that was reminiscent of former President Donald Trump, whose shadow loomed large over the event.

Debate moderator and Fox News host Maria Bartiromo set the tone when she appeared on stage wearing an “I heart Trump” shirt and a MAGA hat. This earned her riotous applause from the rambunctious audience. In a departure from previous debates, each of the five candidates — Greene, MyPillow CEO Mike Lindell, Sen. Josh Hawley (R-MO), Tucker Carlson, and Florida Gov. Ron DeSantis (R) — was allowed to invite a sizable contingent of their core supporters.

Before things got started, Bartiromo pointed out that this debate would not focus on “boring” domestic and foreign policy topics like the pandemic, or former mainstays of GOP debates, such as outlawing abortion, a strong national defense, and curbing the deficit.

“Let’s face it; nobody voting in the Republican primary will care about these issues, so let’s talk about the things that matter,” Bartiromo declared. “Like cancel culture, transgender bathrooms, socialism, and critical race theory.”

Just like Trump’s cabinet meetings, the debate began with the candidates being asked to praise the former president… and they eagerly seized the opportunity.

Lindell, whose guests included many of the state Republicans who tried to overturn the 2020 election, proudly noted that he had bankrupted himself while attempting to prove the unprovable — that Trump had won.

“I led the charge to show that China was involved in switching 24,000 votes in one county in Wisconsin where 17,000 people voted,” Lindell said to enthusiastic applause from the audience. “It’s certainly not my fault that President Trump was not reinstated in August of 2021. I have done more than anybody to right this wrong.”

This drew a rebuke from Hawley, who reminded the audience that he was the one who cheered on the violent mob that would later storm the Capitol. In fact, his special guests were many of the men and women who had served time in jail for their role in the insurrection — and whom prominent Republicans began calling “political prisoners” a mere six months after they attempted to launch a coup.

Hawley then promised to distribute signed copies of the iconic photo taken that morning to any audience members who wanted one, which turned out to be everybody.

Next, DeSantis brought the crowd to its feet when he began his opening statement with an emphatic “Hail Trump!” He then touted his record of proudly continuing Trump’s policy of completely ignoring the coronavirus pandemic while hundreds of thousands of Americans died.

“I have taken the bold approach of our beloved leader one step further by actually punishing those who sought to side with know-it-all scientists,” DeSantis declared.

However, his performance was hampered by the fact that many of his guests — seniors from his state who refused to wear masks or get vaccinated — were in intensive care. But that did not slow down the governor.

“Did thousands of children die because of me? Well, yes. But it’s a matter of principle,” DeSantis declared.

“Patrick Henry once said ‘Give me liberty, or give me death.’ Today I ask you ‘Why not both?’”

This led to a brief interruption of the debate because one elderly gentleman, who was still suffering the effects of his third COVID-19 hospitalization, applauded so vigorously that he collapsed. He was later pronounced dead, and, pursuant to an executive order from DeSantis that aims to reduce the pandemic death toll, “patriotism” was listed as the cause.

Next, Fox News host-turned presidential candidate Tucker Carlson promised the crowd that he would heal the country’s divisions and be “a president for all white Americans.”

He then vowed to “cut all government funding for anybody who emigrated to the US in the past 100 years, as well as their descendants — unless they came from Europe.”

His pronouncements were especially well-received by his guests — a grand wizard of the KKK and leaders of many other white supremacist groups.

While each of the four candidates could be assured of the enthusiastic support of their guests, they had not considered that Greene would appeal to all of them. The Georgia congresswoman embodies all of the subsections that now make up the GOP’s core constituency — from election conspiracists and anti-vaxxers to white supremacists and violent insurrectionists.

In her fact-challenged opening statement, she laid out a platform that would honor Trump’s legacy. For example, she pledged to use the Space Force to fight Jewish space lasers, and to make Rep. Louie Gohmert (R-TX) head of NASA so he can carry out his plan of altering the moon’s orbit to fight climate change.

Greene also promised to “end cancel culture” while simultaneously calling for fact-based history to be outlawed and those teaching it to be fired. She added that she would end the “invasion of Trans biological men in girls/women’s sports.”

The lawmaker, who has a long history of making stuff up, then threatened government workers with violence for trying to get more Americans vaccinated. It is just one of many examples of her envisioning the use of deadly force against her political enemies.

When she ended her rambling monologue with “Let’s go hunt the libs,” she was carried out on the shoulders of an adoring and well-armed crowd — and may just have cemented her status as front-runner for the Republican presidential nomination.

Obviously, this is satire, and, although we have a strong record of accurately predicting chaos, we do not know who will emerge from the GOP primary. However, while it may sound humorous and over-the-top at times, just about all of the above are things that Greene and the others have said or done (literally or by implication) — and these are only the words they dare say out loud and the actions they know they can currently get away with.

In addition, poll after poll shows that Republican voters themselves live in an alternate reality and are quick to embrace even the most outlandish nonsense if it somehow fits into their world view. That is why we are quite certain that, Trump or no Trump, the upcoming GOP primaries will get pretty nuts and that a traditional candidate won’t stand a chance.

What we have learned since 2016 is that crazy is good for ratings, which is why commercial news outlets will give it a platform. It worked for Trump and it could work for Greene.

Trump turned from a laughing stock and a pariah of the Republican establishment into a cultish leader who has sent his former adversaries cowering in fear of the mob Trump can unleash at any moment.

And Greene has already come a long way from a kook criticized by GOP leaders to a kook who is a favorite of the Republican base. Anybody who ignores her — and the legion of others like her — does so at their own peril… and that of the country.