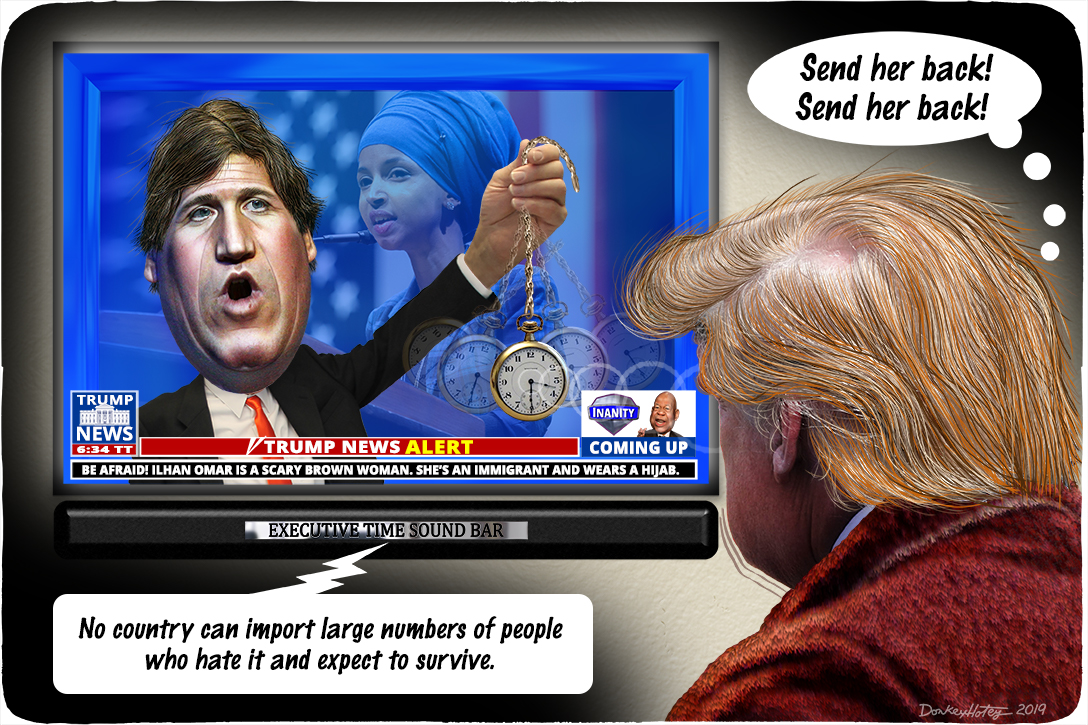 It’s been a lucrative strategy. However, just making a buck wasn’t enough for them. They also wanted to shape the fortunes of the country they were dividing. Here, too, they had tremendous success.

And that is what is getting lost amid the outcry over Donald Trump’s latest round of racist tweets: The US president is often just parroting what he sees on Fox News.* His racism and distorted view of reality are a direct reflection of what this conservative network decides to put on the air.

While regimes throughout history have used propaganda outlets to get the word out and spread their ideology, in the US it is now very much a two-way street. Fox News is both a tool and a puppeteer, manipulating events directly and indirectly. In many cases, the network drives the conservative agenda with its programming. Then, when Trump and his allies pick up on it, Fox News gives them a platform to broadcast that agenda with no fear of criticism or being fact-checked.

Then, with the message already amplified, Trump tweets clips from the network — primarily clips of its many conservative commentators — or tweets promotions for its shows.

The president’s recent racist rants are a perfect illustration of how this works: Trump’s tweets directed at four Democratic Congresswomen in July followed an attack from Fox News host Tucker Carlson on one of them, US Rep. Ilhan Omar (MN).

Last week, the target of another racist Trump tirade was Rep. Elijah Cummings (D-MD). Again, the tweets seemed to have been triggered by a Fox News segment on the lawmaker’s district in Baltimore.

This symbiotic relationship between the president and his favorite TV channel is also reflected in the revolving door between Fox News and the Trump administration.

At the same time, lots of Fox News contributors and staff have found a home in the Trump administration. John Bolton is national security adviser, Ben Carson is secretary of Housing and Urban Development, Morgan Ortagus is the State Department spokesperson. In addition Richard Grenell (Germany), Scott Brown (New Zealand), and Georgette Mosbacher (Poland) now serve as ambassadors. And those are just some of the Fox News alumni currently serving in the US government.

The well-worn path between Fox News and the White House also includes the network’s former co-president Bill Shine, who worked as White House deputy communications director and left to take a job with Trump’s reelection campaign. Right-wing nutjob Sebastian Gorka was a Fox News contributor, then a deputy assistant to the president before going back to Fox News, and then leaving again. Mercedes Schlapp, a former Fox News contributor, first served as White House director of strategic communications and now works for Trump’s reelection campaign.

And all this only scratches the surface, because, through their programming and sometimes in person, the network’s top personalities, such as Sean Hannity, Jeanine Pirro, Carlson, or the Fox & Friends crew, are effectively Trump advisers. The only difference between them and official White House staffers is that they are not subject to any transparency and accountability rules — and they are paid better.

The president is not the only political figure getting cues from Fox News. Following the Mueller hearings last week, a clip made the rounds showing that the opening remarks of Rep. Devin Nunes (CA) — the ranking Republican on the Intelligence Committee — exactly mirrored the rhetoric of Hannity.

Devin Nunes did his homework pic.twitter.com/Y8DzGoMlMM

For two decades, Fox News operated under the laughably false motto of “fair & balanced” until ending that charade in 2017. That’s like McDonald’s advertising the Big Mac as “the world’s healthiest food.”

In fact, the network has been a subsidiary of — and a driving force behind — the GOP and the alt-right for some time. Its viewers are presented with an alternative reality, and it’s no surprise that they vote accordingly. They don’t live in a land of facts but rather in a country of conservative make-believe in which Trump is a messiah.

Not surprisingly, the network’s right-wing propaganda is having an impact. A 2017 study published in the peer-reviewed American Economic Review estimates that if Fox News had not existed in 2000, the overall Republican presidential vote would have been 0.46 percentage points lower. Just as a reminder, George W. Bush won Florida by 537 votes. It’s not a stretch to argue that the network put a Republican in the White House that year — for the first time.

It’s only gotten worse since then. A study in 2012 by Fairleigh Dickinson University’s PublicMind showed that people who did not follow the news at all were more informed than people who watched Fox News.

Since then, the network’s misinformation campaign has reached new heights, culminating in the election of Trump.

And after his inauguration, Fox News basically became a part of the White House communications department. Its coverage now is every bit as partisan and deceptive as that of Pravda and TASS in the old Soviet Union.

While Fox News likes to cloak itself in a mantle of patriotism, it actually does Americans a great disservice. Its coverage is often blatantly racist, it hypes an anti-immigrant agenda, and it exploits other divisions in society.

For example, in 2018, when a group of asylum seekers made its way toward the border ahead of the midterm election, Fox News covered the “caravan” as though it were a harbinger of the end of days. When an immigrant commits a crime, Fox News covers it endlessly, but the threat of radical white supremacists is hardly discussed.

The ad nauseam coverage of the danger immigrants supposedly pose stands in stark contrast to the coverage of an actual threat to the US: the interference in its election by Russia. Since such interference was done on behalf of Trump, you won’t hear much about it on the network. Instead, its top host peddles conspiracy theories to deflect from what Russia did.

Here is the bottom line: People getting their information from Fox News and Trump’s Twitter account are increasingly detached from reality and facts. In turn, this is leading to their ideological radicalization, which is not only troublesome, but also potentially dangerous, for example if Trump loses the 2020 election and refuses to leave — claiming that his victory was stolen.

*Fox News, simply put, is a right-wing propaganda tool,  not a serious media outlet that deserves to have the name “news” in its name. However, for reasons of clarity, we refer to it as a news organization and use the name Fox News, however misleading it may be, in this editorial. It should also be noted that a handful of people and a small share of the programming is dedicated to something that could even remotely be referred to as “objective.” And when that happens, Trump is quick to call them out over it.

Correction: Following publication of this editorial, Fox News contacted us to point out “several inaccuracies” in it. Specifically, Fox News noted that Hope Hicks and Raj Shah work for Fox Corp., the parent company of Fox News, and not the network directly. Fox News also said that Sebastian Gorka is no longer a contributor.
This editorial was updated accordingly.