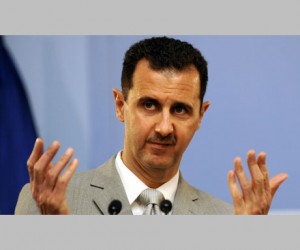 Don’t you hate it when someone says, “I told you so?” We do. That’s why we’ll revise the common statement.

Also, not long before the “spontaneous uprising” in his country, Assad was reaching out to pariah states like Venezuela and Cuba to foster cooperation, including a joint investment with Venezuela in an oil refinery in Syria.

Plus, like Saddam and Qaddafi, Assad had moved away from dependency on the US dollar.

But it all gets really interesting when you consider the South Pars gas field—the largest in the world —which lies underneath the Persian Gulf and is divided between Iran and a country facing it across the water, Qatar. The latter, a highly reliable western beachhead in a hostile region and a major US military hub, is run by Sunnis, who are of course at the throats of the Shiites who run Iran. If Iran gets a pipeline, it trumps Qatar and the West. On the other hand, if Qatar alone can benefit from the field, it becomes a significant player in regional and even global power.

Qatar has been a great favorite of NATO, contributing its troops in places like Libya to mask what are essentially Western invasions of Arab soil. And of course Qatar runs Al Jazeera, which has not exactly been at the forefront of independent investigative journalism in any of these situations. Israel, with its own agenda on Iran, its own formidable gas discovery—turning it from an energy importer to an exporter—and an alliance with NATO and Qatar, also stands to benefit from blocking the Iranian pipeline.

If Assad is a butcher, he’s long been our butcher. Just as Muammar Qaddafi did the US a favor and tortured people after 9/11, so did Assad. Just as, for a long time, Saddam Hussein was only too glad to do the CIA’s bidding.

The war for the hearts and mind of impressionable members of the public goes on. Note the latest dribble (posted late Friday by the New York Times): Obama didn’t want to push the button on Syria, but he succumbed to tremendous pressure:

This raises lots of questions about Obama, and whether this is a sign of his own weakness, a deliberate leaked sop to his peace-oriented donors and supporters or, in line with something we wrote recently, that the decisions facing the modern American presidency are just too consequential for the establishment to leave them to an ephemeral figure like Obama.

Further raising doubts about the extent to which Obama is “in charge” and operating on behalf of the electorate is the Rhodes factor. As we previously pointed out, the rapid rise of the young, obscure and seemingly unqualified Rhodes from a coffee shop novelist to virtually managing foreign policy for the United States is a strange and disturbing event on its own. The particulars deserve much more scrutiny.

You can bet they’ll be silent on Iran when its time comes. Which it will. Even if—once again— the reasons are fake.