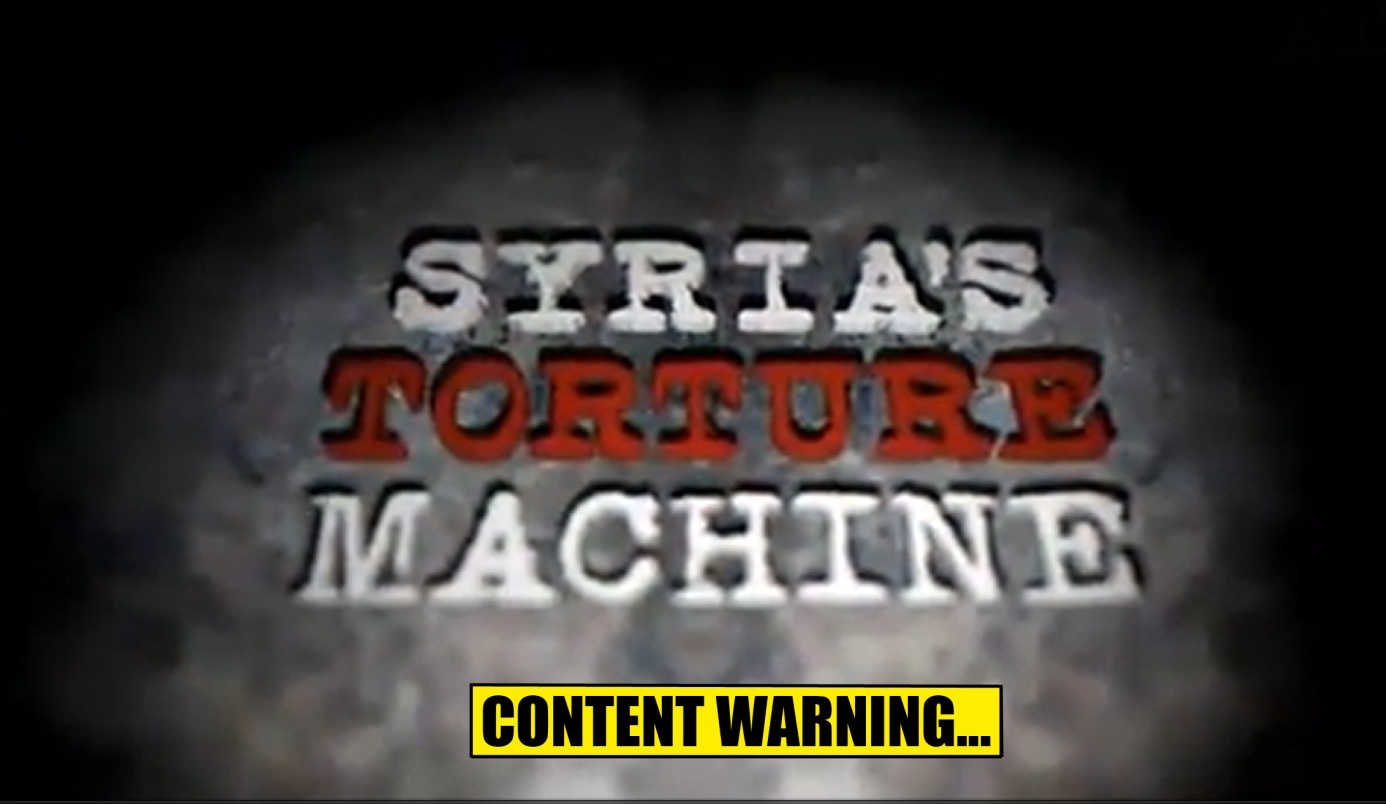 A recent documentary by Channel 4 (UK) has brought to light what it describes as “a production line of torture” that is taking place on “an industrial scale” in Syria. Jonathan Miller, Channel 4’s foreign affairs correspondent, investigates footage taken from thousands of videos circulating online, with the aim of determining whether or not there is prima facie evidence of widespread and systematic torture being carried out by the Syrian state on its own people. But the true significance of this film may well run deeper than that.

The film clips gathered in Syria’s Torture Machine depict graphic acts of torture and the horrific injuries that result; powerful images capable of causing even the most ardent of pacifists to advocate force.

Miller claims that every one of the clips shown has been independently verified, but is forced to concede in his report for the Guardian, ‘I heard nothing but denials that the security forces were shooting, shelling and torturing civilians… we lived in a bubble, seeing nothing of the extreme brutality and killing for which the Syrian regime is so notorious.’ He also relies heavily on claims made by human rights groups and the United Nations in supporting his case against the Assad regime— claims that some skeptics have said are made with zero verification.

The UN has accused the Syrian regime of committing crimes against humanity, claiming that since the civil unrest began last March, 5000 Syrian civilians have been killed, and tens of thousands more arrested—and, as this documentary claims, “pushed through a detention system where torture is endemic.”

However, this number is only a very rough estimate, and the UN acknowledges that this figure may include armed defectors. The UN, along with almost all Western journalists, are denied access to Syria, meaning that the information about who has been killed, how many, and by whom is for the most part speculation.

As a result of such uncertainties, this documentary could well be viewed as just another escalation of the narrative being generated by Western media of a brutal and oppressive regime that needs to be brought to an end. Aisling Byrne, a projects coordinator with the NGO Conflicts Forum, believes that what we see reported in the Western media is not the full story, merely ‘a deliberate and calculated campaign to bring down the Assad government so as to replace it with a regime “more compatible” with US interests in the region’. She writes in the Asia Times, ‘the first stage of this war on Iran is Syria; the first campaign in a much wider sectarian power-bid.’

This documentary (and the daily news reports of a tyrannical and violent regime in Syria) is reminiscent of the build-up to the invasion of Iraq, when mainstream Western media prepped the public for invasion with distressing reports of atrocities committed under Saddam’s reign. The purported motive for the torture carried out in Syria is even the same as that reported in Iraq—to intimidate and terrify the population. A similar pattern has continued with the outbreak of the Arab Spring.

WhoWhatWhy has for some time been reporting on how Western governments and their media have been more favorable to some uprisings than to others—with their media compliant in selective coverage and failure to verify independently. Such contrasts can be seen when looking at the steady tattoo of allegations concerning mass atrocities leveled at Qaddafi of Libya (but after his demise never confirmed), compared to the almost complete failure to cover the uprising in Saudi Arabia—or ongoing human rights outrages there.

Syria’s Torture Machine makes tough viewing and goes far to refute President Assad’s claims that his forces are merely quelling armed insurgence. Yet it seems to do so with the underlying intent of softening up the public for another ‘intervention’ in the Middle East. It is not enough to accept this kind of “documentation” and its nauseating content. What is needed is some sense of the larger picture, and whether or not we, too, might be victims of a kind of assault, albeit of a propagandistic nature. For Assad and his regime have long been brutal, yet Western governments never complained. We do need to ask whether or not some larger agenda is being played out.

Syria`s torture machine “Exclusive” film by… by oliveero
Content Warning: ‘Syria’s Torture Machine’ contains disturbing and distressing depictions and characterizations of torture and other atrocities, including the deaths of children.

8 responses to “‘Syria’s Torture Machine’: British Documentary Offers Cause For Concern In More Ways Than One”