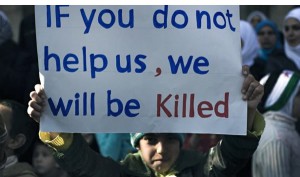 The news out of Syria gets more and more appalling. But so does the quality of the journalism. Here’s an example, from the BBC dated May 26:

At least 90 people, including many children, have been killed in Syria’s restive Homs province, opposition activists say, calling it a “massacre”.

They said scores were wounded in the violence in Houla, as government forces shelled and attacked the town.

Shocking footage has emerged of the bodies of children killed as part of one the bloodiest attacks in one area since a nominal truce began in April.

The UN said international monitors were heading to the area.

An activist in Houla told the Associated Press news agency that troops began the assault on Houla after an anti-regime demonstration following Muslim prayers on Friday.

The assault began with artillery shelling which killed 12, he said – but scores more were butchered when pro-regime thugs known as “shabiha” then stormed the area.

DAMASCUS, Syria, May 26 (UPI) — At least 88 people, many of them children, were killed in a town in the restive province of Homs in Syria in an attack by government forces, activists said.

All these reports were based almost entirely on the word from activists on one side in the conflict, not from journalists or neutral observers. That is not journalism. Why are there not more journalists actually in these places reporting? In the past, reporters always managed to get into conflict zones. And, notwithstanding Syrian government controls on access to these areas and the obvious physical dangers attendant to work in such places, news organizations should be able to hire Syrians who will be diligent, careful and precise.

This fast-moving story has already led to a follow-up from BBC here that raises questions about the earlier assertion of culpability:

The village of Taldou, near the town of Houla in Syria’s Homs province was the scene of one of the worst massacres in the country’s 14-month-long uprising on Friday.

United Nations observers on the ground have confirmed that at least 108 people were killed, including 49 children and 34 women. Some were killed by shell fire, others appear to have been shot or stabbed at close range.

But at whose hands they died remains a matter of contention. Anti-government activists and eyewitnesses interviewed by a limited number of journalists and human rights groups at the scene point the finger at the Syrian army and the shabiha, a sectarian civilian militia that supports the regime of Bashar al-Assad.

The government however denies all responsibility, saying its soldiers were attacked and armed terrorists went on to shoot and stab civilians.

The picture being pieced together by activists, survivors and the limited number of international journalists and human rights organisations in Syria is of an attack that began with the army shelling the town and ended with militiamen killing people house-by-house late into the night.

Reports suggest that at about 13:00 local time (11:00 GMT) on Friday, just after midday prayers, soldiers fired on a protest in Taldou in the Houla area to disperse the crowds.

Some accounts say that opposition fighters then attacked the Syrian army position where the firing was coming from.

Alexei Pushkov, chair of the international affairs committee of the Russian parliament, the Duma, was more explicit: “We have very strong doubts that those people who were shot at point blank [range] and were stabbed, that this was the action of forces loyal to President Assad,” he told the BBC.

“The shelling was probably the responsibility of the troops of Mr Assad, but the stabbing and point blank firing was definitely from the other side.”

Notice how BBC is backing off somewhat from its earlier report that seemed sure who was responsible for the civilian killings—only the one side. This is commendable as far as it goes.

But BBC jumped the gun, so to speak, in other ways. For example, it published a horrifying photo of scores of bodies lined up, purportedly victims of government violence in Houla. It later had to apologize and explain that it was really a 2003 photo from Iraq. Read more about that here, and be sure and scroll down to see the photo.

Here’s another example of inadequate reporting, from the earlier UPI piece:

Meanwhile, the Syrian Network for Human Rights reported Saturday government forces opened fire on international observers in Al-Quseir, Homs, to prevent them from getting to the area, and the observers returned to their hotels.

The Syrian Network cannot be characterized as truly neutral. Why is it necessary to take its word for this—indeed, where did the Syrian Network get its information? And if international observers were fired upon, why cannot the representatives of the observers tell us first? Do the observers themselves lack access to basic communications? Assuming we get verification from these purportedly neutral observers that they were fired upon, the next question is: how does anyone know who fired upon them? Were they shot at in close quarters by those wearing Syrian uniforms? What is the evidence? And even if Syrian uniforms, what of the many Syrian soldiers who defected to the opposition? Would those massacring people necessarily want to correctly identify themselves?

In fact, if you’re going to take all your information from one side of a conflict in which both sides are armed, at least demand—and share with your audience—a lot of details on what purportedly happened, and why. Thus, if you’re alleging that a family was killed when the government forces lobbed a shell at its house, the question would be: why? Is there a government campaign to lob shells indiscriminately at houses? Is this a common occurrence? Or, if the attack is verifiable, were government troops responding to gunfire from the house or something nearby? (We do begin to get tentative answers in Monday’s BBC report.) Or are they just committing atrocities as a way to intimidate the population?  Note that when reporting on conflicts between Israelis and Palestinians, Western news sources typically include statements from Israeli authorities characterizing bombardments of homes as either accidental or the inevitable consequence of militants using homes as cover for their own attacks—BBC did something similar with the Houla story, belatedly, Monday.

We know that the Syrian regime is brutal. We know that it faces an armed uprising which it is determined to crush. The opposition may be accidentally providing inaccurate information, it may be deliberately exaggerating or making things up out of whole cloth. It may be telling the truth in some or even all instances. It is also necessary to take into account other factors, like the shabiha militia, which supports the regime but has its own agenda. The bottom line is that without journalists verifying, it’s not journalism. And it’s not worth rushing to report one-sided claims under pressure to scoop the competition instead of waiting for more reliable information.

Would Western media have accepted reports from Vietnam (via entities with names like the Vietnamese People’s Human Rights Committee, or Vietnamese Network to Protect Civilians) that contained unverified and inadequately-documented or poorly-detailed reports of American atrocities? Don’t think so.

Given what is now emerging about behind-the-scenes covert involvement of outside forces in creating and stoking uprisings in other countries, don’t we need and deserve a closer look at all of this—including those very effective, neatly lettered, English-perfect signs that always catch the cameras?

The fact that many stories from Syria include a plea for “international intervention” (presumably of an armed nature) means this is not just an academic issue. Because, unless we get a handle on what is really going on, things are destined to get a lot worse.

13 responses to “Syria: The Dangers of One-Sided Reporting”