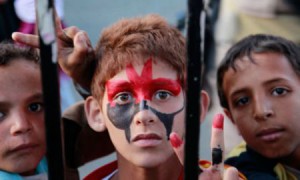 Three gunmen ambushed a military general on a residential street in Damascus on Saturday, the Syrian government reported, in an assassination of a government stalwart that was the first of its kind in the Syrian capital and another step away from the nonviolent roots of the antigovernment protests.

In fact, there’s good reason to think that what was originally presented as a peaceful indigenous uprising by ordinary people now involves a very sophisticated and professional apparatus with its own agenda.

What could that be? Well, consider the eagerness with which almost all the leading countries in the West and their allies elsewhere have condemned the Syrian regime—in dramatic contrast to their silence toward comparably repressive but pro-Western governments like Bahrain and Saudi Arabia.  They can’t wait for the Syrian government to fall.

They can’t wait: literally. This Western coalition has made clear that it wants Bashar Assad out, and a new, much more compliant leader in his place.

We saw a near-identical situation in Libya, replete with similar attempts to build world support for action to protect ordinary people. To be sure, ordinary people were rising up against Qaddafi, but it wasn’t just ordinary people. A massive propaganda campaign, alarming the world with one outrage and atrocity after another, was most definitely not the work of these ordinary people. Remember Qaddafi purportedly ordering his troops to commit mass rape, and fortifying these young men with Viagra (and condoms!)? Never verified—and never mentioned again once Qaddafi was toast. Remember the defecting cabinet minister who promised proof that Qaddafi had personally ordered the Lockerbie bombing? Proof never emerged, never mentioned again. That was followed, only shortly before Qaddafi was ousted, by a lot of bragging from the West about all the covert intervention without which the rebels could never have succeeded. Plus the revelation that the Western darling, Qatar, had covertly sent in its troops to Libya. We are also seeing a similar situation in Iran, replete with denials and surrogates.

Meanwhile, most of the media—even more foul than in their previous foulness, docility and lack of initiative—have dutifully reported the propaganda line that is being handed to them regarding Syria, without any serious effort to raise legitimate doubts. This is just a bunch of normal Syrians, peacefully protesting, and a savage and unconscionable response from their government. The headlines range from the regime torturing children to today’s from CNN, about government troops “shelling randomly.” (The sources, as in Libya, are the murky “opposition” –not the most reliable and neutral of observers.)

What they have trouble saying is this: Yes, the Syrian regime has always been brutal and determined to hold on to power at all costs—just like the Libyan. And the Egyptian and the Saudi and the Bahraini. But only some governments are told by foreign governments that it is time to go. And only some governments face the wrath of the unified diplomatic and covert military/intelligence apparatuses of countries with a stake in the game. Thus, it is impossible to say if the accounts of snipers firing on people in Homs is true—even assuming it is, then who is actually behind this activity, and with what objectives.

As for the violent reaction by—or ascribed to—the Syrian regime (and Qaddafi), well, those are exactly what any authoritarian or totalitarian government would do that does not want to give up power and end up with a sharp instrument up their orifices. Do you believe that the West’s factory, aka China, would do differently? Anyone pay attention to goings-on in Tibet? Even more relevantly, do you believe for a second that the government in the United States or Britain or France would simply abdicate in the face of an armed uprising calling for an entirely different regime—and one supported by foreign powers—without a fight? Just look at the way the American power structure has reacted to a comparatively minor disruption like the Occupy movement.

So there are two main points here: outsiders are heavily involved in the uprising, and any response from Syria is to be expected.

The evidence is everywhere that the uprising comprises a geo-strategic agenda grafted upon legitimate domestic grievances and aspirations for liberty. Let’s consider the last two paragraphs of that Times article:

Speaking at the open session of the minister’s meeting, the Tunisian foreign minister, Rafik Ben Adessalam, said the Syrian people had the same right to freedom that has already been achieved by the people of Tunis, Libya and Egypt.

The foreign minister of Saudi Arabia, Prince Saud al-Faisal, said that international armed intervention in Syria had to be ruled out, but those responsible for killing innocent civilians had to be held accountable.

What’s left unsaid is that the Saudi people, too, presumably have the same right to freedom. So the Saudi official has to be careful of what he says. Not the Tunisian, coming from a post-Arab Spring country.

And why shouldn’t they be? The repressed majority in Syria are Sunnis, potential allies of the Saudi royal family, while the ruling Syrian clique is a Shiite sect with ties to….Iran. And there are restive Shiites (with ties to Iran) in Saudi Arabia’s oil-rich Eastern Province involved with uprisings against the Saudi royal family. Uprisings you may not know about simply because the media has failed to cover them—they’re one incarnation of Arab Spring that the Western establishment does not want covered.

The reason is simple enough: The Saudis are the West’s chief partner in the oil business and elite wealth-sharing generally. They’re threatened by Shiites. Iran and its partner Syria are leading players in the Shiite league. From this, it’s not hard to figure who might benefit both from toppling the regimes in Tehran and Damascus—other than ordinary citizens.

It is therefore interesting to note the following development, as reported by the Associated Press:

Al Qaeda’s chief has called on Muslims from other countries to support rebels in Syria seeking to overthrow President Bashar Assad, saying they cannot depend on the West for help.

A senior Iraqi security official also told the Associated Press on Saturday that intelligence over the last four months has revealed a flow of al Qaeda-linked fighters from the northern Iraqi city of Mosul into Syria….

Ho-HO! It’s our old friends, the Saudi-connected, staunchly pro-Sunni Al Qaeda. That’s right. The same enemies of the American people whose leader needed to be very publicly hunted down and killed by those Navy SEALs in that strange raid whose media coverage never made any sense. Now, everyone’s on the same side.

We can be reasonably certain that this story will be a blip, largely unnoticed, although it for very good reason could outrage an awful lot of people, starting with the families of 9/11 victims who sense that the true (and ongoing) relationship between the Saudis and Al Qaeda has been deliberately covered up.

Then there’s another intriguing development, another blip, another unconnected dot. This from the BBC:

The head of the suspended Arab League observer mission to Syria has resigned as League foreign ministers meet to decide their next move in the crisis….

Human rights groups criticised him for his actions in Darfur, where Sudan is accused of genocide by the International Criminal Court.

The Arab League suspended its mission in Syria at the end of January, after it failed to halt the violence.

And then this dot

The Arab League asked the United Nations Security Council on Sunday to send a peacekeeping mission to Syria, and called on Arab nations to sever diplomatic relations with the country in an effort to pressure it to end the violence there.

As the Arab League sought to speed an end to a conflict that appears to be escalating toward civil war, several Islamist groups, including Al Qaeda, sought to ramp it up, calling on their followers around the globe to join a jihad against the Syrian government.

At a meeting of the Arab League’s foreign ministers in Cairo, after the League’s own observer mission to Syria failed to end the bloodshed last month, the organization adopted a resolution asking the Security Council to authorize a joint Arab-United Nations force to “supervise the execution of a cease-fire.”

The resolution also called on Arab League members to “halt all forms of diplomatic cooperation” with representatives of the Syrian government. As it has before, the League also called for Syrian military forces to withdraw from the cities, and an immediate end to the killing of Syrian civilians.

So, instead of noting that Al Qaeda, the Saudis, the US, et al are all on the same side, this reportage misleadingly stresses the “conflict” between Al Qaeda and the UN over how to resolve the Syrian situation. It is certainly true that the UN—however one thinks of that institution as embodying a particular viewpoint—supports negotiations, and Qaeda does not. But as usual, the elephant in the room is missing: the United States and its European allies, desperate—desperate—for oil. And the Saudis, desperate to neutralize all sources that might foment a Shiite-led rebellion in Saudi Arabia’s oil heartland.

A final thought: At this rate, and with this behavior, and the media’s incompetence (or willful ignorance?), don’t expect the United States government to launch a crash Manhattan Plan—to generate alternative energy sources— any time soon.