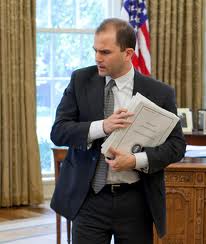 For some possible context to President Obama’s current trip to Israel, I thought back to yet another of the New York Times’s oddly unsatisfying “profiles of power.” This one, which was published last week, introduces us to a highly influential Obama foreign policy adviser:

As President Obama prepares to visit Israel next week, he is turning, as he often does, to Benjamin J. Rhodes, a 35-year-old deputy national security adviser with a soft voice, strong opinions and a reputation around the White House as the man who channels Mr. Obama on foreign policy.

Mr. Rhodes is drafting the address to the Israeli people the president plans to give in Jerusalem, but his influence extends beyond what either his title or speechwriting duties suggest. Drawing on personal ties and a philosophical kinship with Mr. Obama that go back to the 2008 campaign, Mr. Rhodes helped prod his boss to take a more activist policy toward Egypt and Libya when those countries erupted in 2011.

Unfortunately, the article never really explains what that “philosophical kinship” is. It would be of particular interest to those who have always wondered, and still do not know, what Barack Obama’s overarching philosophy is.

We don’t really learn much about Rhodes’s either, beyond the fact that he is quietly pushing for more US intervention in Syria, on the heels of a successful push to convince a supposedly reticent Obama to bomb the heck out of Libya, purportedly for human rights reasons. Some now know better—that removing Qaddafi had precious little to do with helping innocent people and a lot to do with oil companies, banks and intelligence agencies.

What’s especially strange about the article is that, for those of us who continue to wonder how a virtual cipher rose so quickly from the Illinois legislature to become the most powerful person in the world, we end up wondering the same thing about an aspiring novelist from New York City who fairly catapults to enormous influence in shaping policy regarding some of the most complex and sensitive matters facing this country.

Somehow, beyond noting that “In many ways, Mr. Rhodes is an improbable choice for a job at the heart of the national security apparatus,” the Times is not sufficiently curious about any of this to probe further. Instead, it provides a clutch of clichés. We learn that the Rhodes family is fiercely divided between Yankees fans and Mets fans. We learn the father is a conservative-leaning Episcopalian from Texas, the mother a liberal Jew from New York.

Though the Times never underlines this, the careful reader comes to realize that Rhodes’s guiding philosophy is as hard to discern as the precise reasons that he has the president’s ear. In 1997, he briefly worked on the re-election campaign of New York City Mayor Rudy Giuliani, a Republican. Shortly after 9/11, the aspiring novelist suddenly decided to do his part for society, moving in 2002 from Queens to Washington, and quickly found himself “helping draft the 9/11 Commission report as well as the Iraq Study Group report.”

The Times, of course, does not think it is worth pointing out how strange this is. It is almost as if all 24-year-olds with no apparent credentials of any kind go directly to explaining the most massively controversial and complex set of circumstances to the American people.

We are never even told what kind of education Rhodes got, or where, or whether he has ever been anything beyond an aspiring novelist. There’s no indication of what he did on Giuliani’s campaign (he would only have been about 19 or 20 at the time) or whether his preference for the mayor who presided over the 9/11 response had anything to do with his going to Washington, or miraculously being hired by Democrat Lee Hamilton to explain 9/11 to the public.

From these improbable beginnings, Rhodes is suddenly a speechwriter on Obama’s presidential campaign. How did he come to Obama’s attention? The article doesn’t say. However, it does note that the Iraq Study group report on which Rhodes worked “was a template for the anti-Iraq war positions taken by Barack Obama” as a senator and candidate.

Yet, without explaining how that report made Obama an Iraq dove, or what Rhodes himself believed, we learn that Rhodes is now essentially the opposite—a hawk pushing Obama to intervene abroad. Again, this contradiction seems totally lost on the poor Times reporter.

In writing Mr. Obama’s speech next week, Mr. Rhodes is likely to focus on America’s unshakable support for Israel. But if history is any guide, he will slip in a reference to Syria’s democratic future.

“Ben always holds on to the pen,” Mr. McFaul said. “Because of his close personal relationship with the president, Ben can always make policy through the speeches and statements made by President Obama.”

Almost as an afterthought about this fellow who rocketed from obscurity to being one of Obama’s most influential advisors, the writer, quoting Rhodes’ older brother on the family’s baseball feud, notes that the brother “is now the president of CBS News.” Searching sources other than the Times, we find that David Rhodes was a production assistant at the fledgling Fox News Channel around the same time Benjamin was volunteering for Giuliani—and was the conservative channel’s news desk Assignment Manager when the planes struck the Twin Towers. Highly trusted by Fox’s chairman Roger Ailes, he managed Fox’s coverage of three presidential elections, including the one where his brother was writing Obama’s speeches, was hired by Bloomberg TV right after Obama’s election, and in 2011 was named president of CBS News.

Only a news organization so hopelessly compromised by nepotism and thoroughly woven into the power structures of this society could not think the fact of Rhodes’s brother’s job and connections worthy of a single full sentence.

If the Times does get around to explaining that, may we ask one question? Did Benjamin Rhodes even attend college? (No thanks to the Times, we learn from a brief Wikipedia entry that he did—Rice University in Houston, Texas). OK, here’s another: what did Rhodes do, prior to 2002, that made him sufficiently expert to help craft the 9/11 report? (No easy answers on that one.)

In this case, it’s not unreasonable to wonder whether some particular faction or other might have spotted “talent” and “agreeability” in Rhodes, and helped hasten his rapid ascent to the top. Because it’s mostly just in movies where someone lacking experience or credentials is plucked from obscurity and invited to help decide the important issues of our time.

The great exception to this rule being, of course, presidents themselves. Obama’s own rapid rise from obscurity, like that of George W. Bush (he at least of famous lineage), was astounding, and, if you think about it, it’s kind of remarkable how little we really understand about how and why Obama himself got to the top beyond the package of smarts and charisma—or about what exactly he believes in. We’re a long way from JFK—whose death 50 years ago blunted a tradition of edgy frankness and risk-taking we also associated with FDR, Teddy Roosevelt, Truman, etc.

What better topic to pursue at the start of Obama’s second term than who this man is and what he really believes and where he is leading this country?

27 responses to “NYT’s Rhodes to Nowhere: A Cipher in the Oval Office”