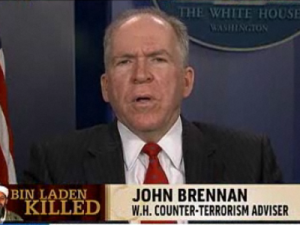 John O. Brennan, nominated by President Obama to be the next director of the Central Intelligence Agency, is a crafty character. Not surprising for a spy.

The Washington Post says that his nomination may generate a debate about the policy of using drones to kill terror suspects, and that there’s some dispute about what Brennan’s position was on the use of torture during his lengthy career in the spook business. But the fact that his own role in the torture debate is even subject to disagreement is just the beginning of this gentleman’s craftiness.

It actually gets much, much more interesting. Brennan’s nomination is a great time for the public—and its elected representatives—to demand answers to a host of questions, not just about Brennan’s values and activities, but about whether the resources of the presidency are routinely used for nakedly political purposes.

As Obama’s counterterrorism adviser, Brennan played a central role in two episodes that provided the President with much needed image-boosts. In one, Navy SEALs bagged the numero uno prize, Osama bin Laden. In the other, Navy SEALs rescued a young American woman from Somali pirates.

As we noted here previously, neither of these operations is free of controversy. You can see some of the issues we raised on the Abbottabad raid, shortly after it took place, here, here, here, and later here.

With the bin Laden operation, Brennan has provided a shifting panoply of details concerning what went on that have never been rationalized, and that raise fundamental questions. In that linked article, we reported that

Brennan…was the principal source of incorrect details in the hours and days after the raid. These included the claim that the SEALs encountered substantial armed resistance, not least from bin Laden himself; that it took them an astounding 40 minutes to get to bin Laden, and that the White House got to hear the soldiers’ conversations in real time.

Perhaps the most troubling of many troubling assertions was the final explanation Brennan provided for why Osama bin Laden’s body was hastily dumped in the ocean—rather than being made available for autopsy and identification procedures, or buried somewhere unknown to the public but where the body could later be exhumed if necessary (a common occurrence when identity issues arise). ). Here’s what Brennan said: he consulted the Saudis on what to do with the body, and they said sure, good idea to toss the terror leader into the deep.

Brennan, it should be noted, has close ties to the Saudi leadership from his years running the CIA station in Riyadh, 1996 to 1999. (He then returned to Washington and was CIA deputy executive director at the time of the September 11 attacks.)

There’s a great deal of irony in taking advice from the Saudis on deep-sixing a valuable piece of evidence, given questions about the Saudi leadership’s knowledge of what was afoot with the 9/11 hijackers. For one thing, there’s the well-known rapid departure of Saudi royals from around the United States immediately following the carnage in New York and Washington.

But there’s a meatier, documented Saudi connection. If you’re not familiar with it, be sure to read our multi-part piece here. As we reported, in the weeks prior to the attacks the alleged hijackers were hanging out at the Florida house owned by a top lieutenant in the Saudi hierarchy. Is Brennan not interested in that? Shouldn’t some Senator ask him about it?

And why did the SEALs kill the unarmed bin Laden, when it would have seemed strategically wiser to exert every effort to capture him alive? Imagine what stories this Saudi black sheep could tell! To explain why he was summarily killed, we were first told that he was armed, then we learned he was not, then that his fate was left up to the SEALs themselves.

Brennan—who ran the National Counterterrorism Center for George W. Bush while Bush was seeking re-election in 2004 and pushing the “terror alerts” button like crazy—has plenty of questions to answer.

The bare details of the Somali raid, aka Pirates of the Arabian Sea, immediately suggest that something more was going on. What was this American woman doing in such a crazily dangerous place? Charity work, OK, but it is hardly standard procedure for the US military to launch such a risky and expensive operation—moreover, three months after the abduction occurred—because one civilian in purportedly declining health has been kidnapped abroad.

Was it simply a coincidence this operation came early in the election year, literally just as Obama was delivering his 2012 State of the Union Address? The media, unsurprisingly, did not ask questions but played up the derring-do of the operation and the decisiveness of the Commander-in-chief. Again, we see Brennan at the helm when an opportunistic military adventure unfolds. Is the timing of this operation a legitimate question for his confirmation hearing?

Even back when Obama was merely a presidential hopeful, Brennan showed up at the nexus of intelligence work and image issues. In March, 2008, around the time that rumors and speculation about Obama’s country of birth began circulating, the State department revealed that the passport records of presidential candidates Obama, McCain and Clintonhad been breached. Subsequent reporting by the Washington Times revealed that those accessing the records were actually government contract employees from two private firms. One worked for The Analysis Corporation, a Virginia company run at the time by Brennan—who was also then an advisor to the Obama campaign.

As happens often in cases of malfeasance, the person working for Brennan’s company was described as a lone wolf, and “disciplined”—but not fired. Because the matter was laid to rest before the “birther” controversy took wing, no connection between the breach and the issue was made. In retrospect, though, since McCain’s and Clinton’s place of birth were not in doubt, it is reasonable to wonder whether these improper accesses—which were never explained—were to find out what government records revealed about Obama, and that the searches on the other candidates were conducted to supply that old staple of the spying game, “cover.”

Flash forward four years. We do not yet understand what role if any Brennan might have played in the still mysterious affair that brought down David Petraeus, the man Brennan replaces at CIA. If you don’t think there are power struggles going on that determine, for example, which adulterous relationships in high places come to light and which don’t—then you don’t know Washington very well.

Unfortunately, it will take a quantum leap in America’s investigative journalistic energy (what we’re about) to generate the kind of heat that might be felt by the Brennans of the world—or their bosses. But why waste the opportunity to grill one of the key players in our ever-expanding security establishment?

May We Ask A Single Question of Our Protectors?

The Senate hearings on Brennan’s nomination at CIA will likely focus only on bite-sized, partisan controversies like the death of America’s ambassador to Libya. We’re not likely to witness Brennan opening up about the highly delicate topics of recent vintage discussed above. But why not at least broaden the inquiry to quiz Brennan on current policy toward murky security matters that are still unresolved decades later? A good place to start: the long-overdue declassification of documents that American citizens need to inform themselves about their own history.

As we previously reported, the CIA has been refusing to release records on the assassination of John F. Kennedy. And the new person in charge of declassification at the National Records and Archives Administration is a former CIA counterterrorism officer. In this, the 50th anniversary of Kennedy’s death, might Brennan be compelled to do the right thing—and release all of the records in what the government still says was nothing more than the doings of a “lone nut?”

Surely, this is a nonpartisan issue. Who wouldn’t feel comfortable asking their Senator if he or she would push for prompt attention to this shared national concern?

We may not have access to information we need to understand what is being done, right now, in our names. But perhaps we can find out what went on half a century ago. Maybe then we can begin coming to terms with our past as prologue to the strange state of American democracy circa 2013.