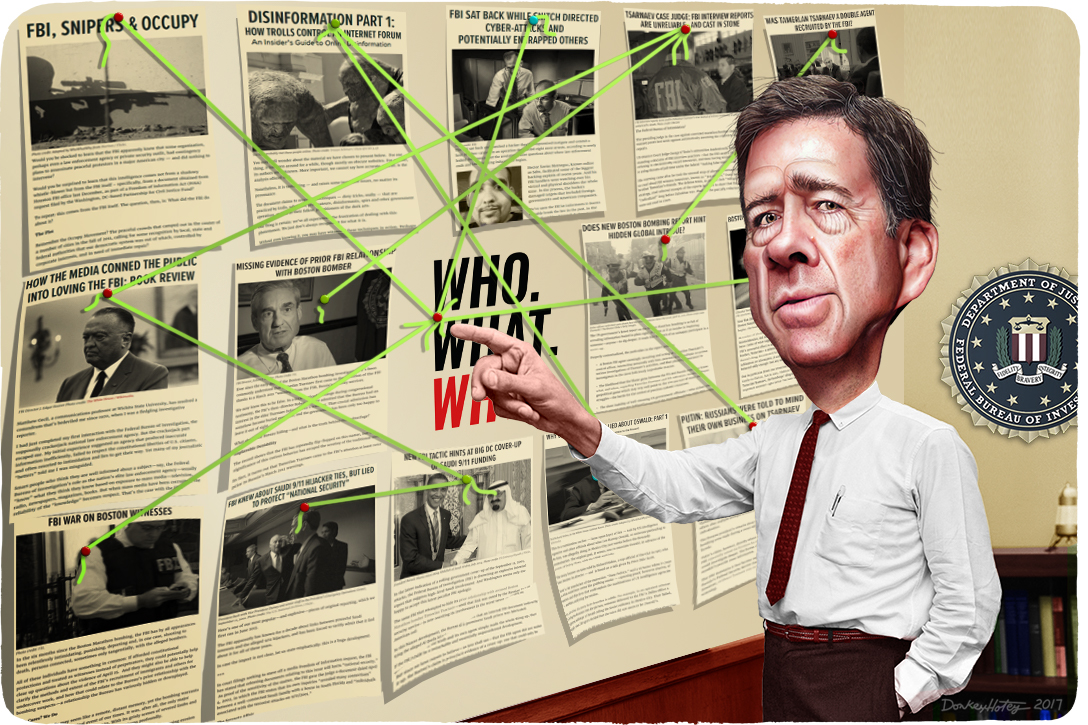 Spotlight on the FBI: The Bureau’s Checkered Past and Present

We presented a story on March 27, 2017 — Why FBI Can’t Tell All on Trump, Russia — that contained troubling information about the Federal Bureau of Investigation (FBI). Some found it shocking, even during these times when nothing seems shocking anymore.

To be sure, with the FBI, as with all institutions, there are extenuating circumstances, the competing priorities and agendas, unrealistic expectations, and tremendous pressure — from the press, from the public, and from above — to produce results.

This pressure may partly explain the bad choices the Bureau continues to make. Partly.

The fact is, the FBI has a long history of incompetence and worse: falsifying evidence; framing innocent people (go here, here, here, here, here, and here); and even shooting people for what appears to be no justifiable reason. With the shootings, the Bureau “reviews” the situation, then, it almost always absolves itself.

When its employees try to work within the system to improve it, quietly blowing an internal whistle, they are subjected to severe retaliation.

For more on the range of problems at the Bureau, see the links and summaries below: a small selection of our FBI stories that demonstrate the consequences of those bad choices. They have endangered national security, harmed our civil liberties, harmed innocent people, and appear to have put out false narratives, misleading the government, the media, and the public.

Treachery is as old as mankind, but let’s start with the late J. Edgar Hoover, the old trickster behind the FBI’s Counterintelligence Program, also known as COINTELPRO. The Church Committee reported that “Bureau witnesses admit that many of the targets were nonviolent and most had no connections with a foreign power.” Cointelpro supposedly ended in 1971, but the author of this story has identified a variety of insidious Cointelpro techniques in political forums to cause disruption, suppress dissent, and spread disinformation. Would you be shocked to learn that the FBI apparently knew that some organization, perhaps even a law enforcement agency or private security outfit, had contingency plans to assassinate peaceful protestors in a major American city — and did nothing to intervene?

How credible are the reports of interviews filed by FBI agents working a case? The FBI’s process for handling interview reports (302s) is hardly an ideal one for accurate recording and transmittal of what was said during an interview. The process is thus: two FBI agents ask questions and listen to the answers — without tape recording or obtaining a certified transcript. Instead, they return to their office and, based on their recollection and any notes they may have taken during the interview, write up a summary of what transpired. Summaries are, in most cases, written hours later, sometimes even the following day.

The Federal Bureau of Investigation (FBI), a federal agency already considered notoriously opaque by Freedom of Information Act (FOIA) experts, is taking steps that will further limit the public’s access to its files. As of March 1, the FBI will no longer be accepting FOIA requests by email. Instead, requesters will have to submit requests via fax, “snail mail,” or to an online portal hosted by the FBI called eFOIPA (Freedom of Information/Privacy Act). The FBI says the portal will “significantly increase efficiency” by automating the process for the receipt of and the opening of requests.

There are few things in Washington that garner bipartisan support these days. Protecting Federal Bureau of Investigation (FBI) whistleblowers is now on that short list… the chairman of the Senate Judiciary Committee and the ranking Democrat on the panel jointly introduced legislation to better shield from retaliation Bureau employees who report waste, fraud or misconduct. FBI whistleblowers are among the most poorly protected in the federal workforce. “It’s no secret that FBI whistleblowers often face harsh consequences for simply trying to address failures or misconduct at work,” Judiciary Committee Chairman and frequent FBI critic Chuck Grassley (R-IA) said.

Smart people who think they are well informed about a subject — say, the FBI’s role as the nation’s elite law enforcement agency — usually “know” what they think they know based on exposure to mass media — television, radio, newspapers, magazines, books. But when mass media have been corrupted, the reliability of the “knowledge” becomes suspect. That’s the case with the FBI. As “Hoover’s FBI and the Fourth Estate: The Campaign to Control the Press and the Bureau’s Image” shows, the performance of supposedly first-rate FBI agents has been dismal time and again when the citizens of the United States needed them most, including perhaps most notably the run-up to the events of September 11, 2001.Yet you wouldn’t know that if you were hearing mainstream media accounts.

The Federal Bureau of Intimidation? The presiding judge in the case against convicted marathon bomber Dzhokhar Tsarnaev warned jurors last week against automatically assuming the reliability of FBI interview reports. US District Court Judge George O’Toole’s admonition inadvertently bolstered long-standing criticisms of FBI interview practices — that the FBI creates its own “truth” by refusing to electronically record interviews, and then forcing witnesses to go along with it using threats of jail time under the federal “making false statements” statute.

There is a legitimate reason to question the FBI. There are times when the Bureau seems to be playing dangerous games with dangerous people, as shown in the article below. There are aspects of the Boston Marathon bombing where the official story just doesn’t add up. What if these inconsistencies point to something amiss on a far deeper level? What if the FBI’s initial claim that it didn’t know who the Tsarnaev brothers were — when in fact it knew about them for several years — hides an even bigger embarrassment?

The FBI had a human source in direct contact with Osama bin Laden in 1993 and discovered that he was eager to finance terror attacks on the United States, according to little-noticed testimony in a court case several years back. The testimony, just reported by the Washington Times, underlines how poorly we understand the degree to which the federal government was interacting with Osama bin Laden and monitoring the activities of a network that came to be widely known as Al Qaeda… It was in 1993 that plotters trained in Afghanistan detonated a truck bomb beneath the North Tower of the World Trade Center.

The FBI is disowning an explosive internal report that suggests high-level Saudi involvement. And Washington seems happy to accept this latest peculiar FBI apologia. In this bizarre development, the Bureau claims that an internal FBI document indirectly tying the alleged Al Qaeda hijackers to a prominent Saudi prince was fabricated.

With Congress on Friday abruptly dumping the long-suppressed congressional panel report on connections between the 9/11 hijackers and elements tied to the Saudi royal family, it’s important to note the crucial, stronger evidence, that has never gotten mainstream attention… In early September of 2011, Florida-based journalists reported that a secret FBI probe, never shared with Congressional investigators or the presidential 9/11 commission, had uncovered information indicating the possibility of support for the hijackers from previously unknown confederates in the United States during 2001. Now WhoWhatWhy reveals that those alleged confederates were closely tied to influential members of the Saudi ruling elite.

With the declassification Friday afternoon of the infamous “28 Pages,” the foundation of the official 9/11 narrative is really beyond repair at this point. Al Qaeda did not act alone in carrying out the 2001 terror attacks on America that killed nearly 3,000 people. Foreign government officials did indeed provide financial and logistical support to the hijackers. Leads to that effect were never fully investigated.

This is a rumination on lies — layer upon layer of lies — told by US intelligence agencies and other officials about what Lee Harvey Oswald, or someone pretending to be him, was allegedly doing in Mexico City just weeks before the Kennedy assassination. The original goal, it seems, was to associate Oswald, in advance of the events of Dealey Plaza, with the USSR and Cuba. In an apparent attempt to bring the Russians into the picture, someone delivered to the FBI’s Dallas office an audiotape purportedly of Oswald calling the Soviet embassy in Mexico City. That failed, though, when FBI agents decided that the voice did not seem to be Oswald’s. Two days later, the FBI got on board the subterfuge by falsely reporting that “no tapes were taken to Dallas.” Because of this lie, an investigation more than a decade later by the House Select Committee on Assassinations would erroneously declare that there was no “basis for concluding that there had been an Oswald impostor.” (The existence of an Oswald impersonator in the months before the president’s murder would in and of itself have been prima facie evidence of a conspiracy in Kennedy’s death.)

Earlier this week, Russ Baker, C. Collins and Jonathan Z. Larsen broke a story that caused a major splash. The article may prove a turning point in understanding the nature of the FBI’s investigation into the Trump/Russia connection — and why it may in fact be compromised. In this Podcast, Baker and Larsen describe the story, the bizarre cast of characters and the tangled web they created. Most importantly, they explain what is at stake.

WhoWhatWhy’s March 27 exclusive on Donald Trump, the FBI, Russia, and the mob focused on several key figures. One was Felix Sater, a Trump associate and prized FBI informant. We delved into his criminal past, his company, Bayrock, and its work with the Trump Organization. Sater was even more intimately involved with Trump and his fortunes than we initially realized. According to a sworn 2008 deposition in a suit Trump filed against the author Timothy O’Brien, the developer gave Sater’s company, Bayrock, an exclusive on all development deals in Russia.

Russ Baker joins “serious comedians” Tim Dillon and Ray Crump to discuss his recent groundbreaking article on Donald Trump, the Russian mob, and the FBI. Featured prominently in the discussion is Felix Sater, a curious Trump associate whose business card claimed “Senior Advisor to Donald Trump”, yet in a deposition Trump claimed he wouldn’t recognize him if he was in the room. It turns out that Sater, a convicted criminal with mob connections, had become an FBI informant inside a mob organization with roots in Russia and ties to Vladimir Putin. What does it all mean? How could this important but unknown past history explain Putin’s suspected effort to influence the election? Is the president compromised by the Kremlin? Could Trump have been working with the FBI?