The Federal Bureau of Intimidation?

US District Court Judge George O’Toole’s admonition inadvertently bolstered long-standing criticisms of FBI interview practices—that the FBI creates its own “truth” by refusing to electronically record interviews, and then forcing witnesses to go along with it using threats of jail time under the federal “making false statements” statute.

His warning came after he took the unusual step of allowing Tsarnaev’s defense team to read aloud FBI witness interviews, known as “302 reports,” from two of older brother Tamerlan’s friends. The defense team, as part of their “mitigating factors” strategy, read selected excerpts of the reports in order to show that Tamerlan was “radicalized” long before Dzhokhar was. Much of the partially redacted 302 reports were not read in court.

This unusual “testimony” was allowed because the two witnesses refused to testify in person. One invoked his Fifth Amendment right against self-incrimination, while the other witness just plain went missing. And in the penalty phase of a death penalty trial, the rules of evidence are more relaxed than in the guilty-or-not-guilty phase.

O’Toole advised jurors that FBI 302 reports are not “verbatim transcriptions of the conversation, but summaries, and they may be made from the agents’ notes and then put together in a report either that day or perhaps the next day.”

In fact, the resulting report is a summary of an FBI agent’s interpretation of what was said during an interview—not what was actually said. Even assuming complete good faith on the part of the interviewing FBI agents, anyone familiar with the parlor game of “telephone” could guess what might go wrong here—particularly if the summary report were written “the next day.”

What O’Toole said next pointed to a kind of Catch-22 in FBI procedures that seems designed to intimidate interviewees into supporting the Bureau’s version of what happened.

The judge told jurors that, “It is a federal crime to impede a federal law enforcement investigation by giving false information, but a witness interviewed under these circumstances is not placed under oath, as a witness in the courtroom would be.” 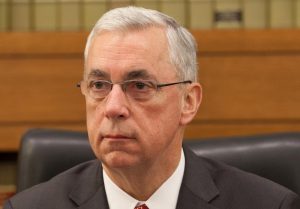 Judge George O’Toole admitted FBI interview reports in lieu of witness testimony, though the reports are third-person summaries of the events that led to Tsarnaev’s death sentence. Photo credit: US District Court

In other words, although 302 reports are actually the interviewer’s summary of what happened during an interview, the FBI nevertheless has the power to prosecute an interviewee for “making false statements” if he or she contests what an agent has written down.

Just how imperfect can those 302 summaries be? That’s hard to say, because the FBI refuses to electronically record interviews under most circumstances. Instead, agents work in pairs—one does the questioning while the other takes written notes.

In an age of the ubiquitous smartphone and with the ever-expanding proliferation of recording technology, this may strike observers as odd. Wouldn’t FBI agents want an indisputably accurate record of what was said?

Actually, they don’t. And the stated logic undergirding the non-recording policy is particularly troubling to critics.

An internal FBI memo made public by The New York Times spells out the policy’s reasoning. Here’s an excerpt:

“[A]s all experienced investigators and prosecutors know, perfectly lawful and acceptable interviewing techniques do not always come across in recorded fashion to lay persons as proper means of obtaining information from defendants. Initial resistance may be interpreted as involuntariness and misleading a defendant as to the quality of the evidence against him may appear to be unfair deceit.”

In other words, if the actual interview were presented to juries, agents’ interrogation techniques may come across as unfair or coercive to lay people, according to civil liberties advocate and longtime critic of the FBI policy, attorney Harvey Silverglate. He writes:

“[W]hat the agency leaves unsaid is that human experience demonstrates that coercive and misleading tactics have a tendency in some situations to produce false rather than true testimony. Therefore, rather than risk such juror skepticism in response to a verbatim recording, the FBI feels that a jury will more likely be led to the FBI’s version of the truth by reading an FBI agent’s form 302 than by listening to the actual interview.”

Even more insidiously, as O’Toole noted in his warning, witnesses are not “placed under oath, as a witness in the courtroom would be.” Nor are they informed that what the interviewers later write down can become a de facto transcript of the witness’s own statement.

This is where the “federal false statements law” comes into play. According to Silverglate, the federal statute known as Section 1001 “provides that it is a felony, punishable by up to five years in prison, to make a material misstatement to any member of the federal government.”

He says this creates “tremendous pressure” on a witness to testify “consistently with what the 302 report claims he told the agents when interviewed.” It works like this:

“When the feds suspect that a witness might tell a tale at the grand jury or at trial that is inconsistent with the prosecution’s favored factual scenario, the prosecutors will usually show him or his lawyer the 302 report. It becomes clear to the witness that he either must stick to the 302 version, or else risk a false statement or perjury charge when he testifies differently under oath.”

And as an example of the sort of “misleading” trickery that can be obscured by the FBI’s non-recording policy, interviewing agents are under no obligation to warn their interviewee, as arresting officers must in accord with the familiar “Miranda” rule: “anything you say can and will be used against you in a court of law.”

Could that be why the two witnesses interviewed in the 302 reports refused to show up at Tsarnaev’s trial?

To read more about the FBI’s apparent “war on witnesses” in the Boston Marathon bombing investigation, read here and here.