How credible are the reports of interviews filed by FBI agents working a case? In fact, such reports are known to be so unreliable that in one case, a federal judge refused to be interviewed by agents unless he was allowed to review their report and make corrections.

That case was more than a decade ago, but the problems raised by these FBI reports—which are often offered in evidence during criminal trials—are very much current. Indeed, the judge in the recent trial of Boston Marathon bomber Dzhokhar Tsarnaev specifically warned the jurors against giving too much credence to such a report.

The case of the judge who insisted on fact-checking the FBI’s work is particularly instructive. This occurred during the much-watched 2002 trial of retired FBI agent John Connolly, the handler of the notorious gangster Whitey Bulger.

Connolly was charged with, among other things, obstruction of justice involving a letter Connolly sent to the presiding federal judge, Mark Wolf. Wolf’s testimony was needed to prove the obstruction.

As is standard practice, prosecutors asked that Wolf submit to an FBI interview in advance of any courtroom testimony. The  interview reports, commonly called 302 reports, are named after the form on which they are written.

The FBI’s process for handling 302s is hardly an ideal one for accurate recording and transmittal of what was said during an interview.

The process is thus: two FBI agents ask questions and listen to the answers—without tape recording or obtaining a certified transcript. Instead, they return to their office and, based on their recollection and any notes they may have taken during the interview, write up a summary of what transpired. Summaries are, in most cases, written hours later, sometimes even the following day.

This reporter sat in court listening to Judge Wolf’s testimony—which is included in my book, Don’t Embarrass The Family, based on FBI agent Connolly’s trial. Under questioning, Judge Wolf revealed that he had agreed to be interviewed, but only on the condition that he would be able to review the 302 for accuracy and to make any necessary corrections. It was clear he had little confidence the FBI agents would accurately reproduce what he said. In plain English, he did not trust them. Judge Wolf had seen his share of FBI interview reports, as he had been a federal judge since 1985 and prior to that had served as an assistant US attorney for eight years.

Judge Wolf’s concern about FBI agents’ ability to accurately render interview content is made even more clear in a footnote in his 661–page decision filed on September 15, 1999 in the matter of US v. Salemme, where it was disclosed Whitey Bulger was an informant.

In footnote 35, Wolf quotes Edwin O. Guthman, who once served as press secretary to Attorney General Robert Kennedy: “You can have a conversation with an agent… and when it is over he will send a memo to the files. Any relation between the memo and what was said in the conversation may be purely coincidental. You would think you were at different meetings.”

Wolf says that after reviewing the 302s, he made only minor changes or corrections. Thus, in this case, at least, no substantive errors had been introduced. But then other interviewees, such defendants and key witnesses, have no right to review and correct 302s. And a presiding judge is hardly the most likely victim of misstatements by FBI agents. Based on a variety of published claims, such misstatements, tendentious or otherwise,may be distressingly common. 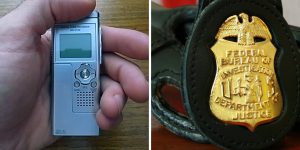 FBI witness reports are often written the day after the interview was given. Photo credits: Justin Evans / Wikimedia, FBI / Wikimedia

In Wolf’s case, his concern seems to have been anchored principally in the recognition that it is extremely difficult for people to remember what was said during an interview while making only an occasional note. Of course, the greater the delay between the end of the interview and the writing of the 302 report, the greater the possibility of errors.

Judge Wolf, based on his experience, would also have known that the 302 becomes the official record of what was said during the interview. Its importance can not be overstated. FBI agents review their 302s prior to testifying at trial; the federal prosecutors will rely upon it in examining (or cross-examining) a witness. Perhaps most importantly, defendants or witnesses who contest what’s written in a 302 open themselves up to charges of “making false statements or even perjury.”

That this is an ongoing problem is demonstrated by the recent trial in Boston of the Marathon Bomber  Dzhokhar Tsarnaev. Judge George O’Toole, having given permission to Tsarnaev’s attorneys to read FBI 302s to the jurors, felt compelled to warn them that the 302s were not “verbatim transcriptions of the conversation, but summaries, and they may be made from the agent’s notes and then put together in a report either that day or perhaps the next day.”

Despite the obvious flaws in the FBI’s system of interviewing and then later dictating the gist of  interviews, the Bureau harbors a gospel-like belief in the 302s. An FBI agent testifying at Connolly’s trial revealed there is a common expression amongst agents: “If it isn’t in writing it doesn’t exist.”

Of course, this implies that the 302 accurately contains all the important statements the witness made. But the potential for selectivity here is obvious. If the witness said he did not get a good look at an assailant, and the FBI agent does not include that in the 302, then no one on the prosecution team will believe he said it because it is not written down.

With that in mind, the FBI agents’ aphorism reads like a cynical inside joke.

Solution is Obvious—But Why Does FBI Resist?

It would be easy to remedy this ancient system of conducting interviews that has existed since J. Edgar Hoover became FBI director in 1924. Why not establish a rule that all interviews be electronically recorded? In this high-tech age it’s hard to conceive of valid arguments against mandatory electronic recording, except in instances where circumstances make it impracticable. Other than such exceptions, the most trustworthy evidence—the person’s voice—would be preserved.

Ironically, the federal government itself does not seem to fully trust the memories of FBI agents. In 1968, Congress passed Title III of the Omnibus Crime Control and Safe Streets Act which gave federal law enforcement authorities and the states the ability to conduct secret interceptions through electronic means between parties who were unaware they were being listened to. However, it required that all those intercepted communications be electronically recorded. Congress did not want FBI agents to listen to the conversations and later write down what they thought they heard. Instead, they reasoned, it’s better for judges and juries to hear for themselves what is said.

Former Attorney General Eric Holder, tacitly acknowledged to the need for a recording policy when on May 12, 2014 he authorized his Deputy James M. Cole to issue a memorandum allegedly changing the policy concerning electronic recording of statements. This reporter noted at times it had so many holes in it that it made little difference to the way things were done. Noted First Amendment expert and author Attorney Harvey Silverglate followed up nine days later with a similar opinion noting: ”a careful read of the missive… proves that the exception often overwhelms the rule.”

The FBI did recognize the pressure to change it in 2006. Its reasons are specious, boiling down to it likes the way things are now done so why change? It also states there are no federal laws requiring it to record the conversations which allows it to refuse to do it.

The issue is straight forward: do we want the best evidence—a record of the words spoken between an FBI agent and another person—or would we rather continue with the evidence the FBI agent looking to solve a case figured she heard and decides to write down. It is time that Congress acts to require federal agents to do the same thing when they interview witnesses and suspects as they do when listening to intercepted communications… which is to record them.