With the declassification Friday afternoon of the infamous “28 Pages,” the foundation of the official 9/11 narrative is really beyond repair at this point.

We had been assured of the opposite on all three counts.

While still considerably redacted, and conveniently released hours before Congress’ 7-week summer break, the long-hidden material from the Congressional Joint Inquiry report of 2002 revealed what tenacious lawmakers have hinted about over the past several years.

“The 28 pages primarily relate to who financed 9/11 and they point a very strong finger at Saudi Arabia as being the principal financier,” Florida Senator Bob Graham said in mid-January, 2015.

A few nuggets from the chapter centered on Omar al-Bayoumi and Osama Bassnan — both suspected Saudi intelligence officers in the US at the time of the attacks with close links to two of the hijackers:

• “During the post-Sept. 11 investigation, the FBI discovered that al-Bayoumi had far more extensive ties to the Saudi Government than previously realized.”

• “According to the FBI, al-Bayoumi was in contact with at least three individuals at the Saudi Embassy in Washington, D.C.”

• “(Bassnan) also lived across the street from the hijackers, and made a comment to an FBI asset that he did more than al-Bayoumi did for the hijackers.”

• “FBI information indicates that Bassnan is an extremist and supporter of Usama Bin Laden, and has been connected to the Eritrean Islamic Jihad and the Blind Shaykh.” 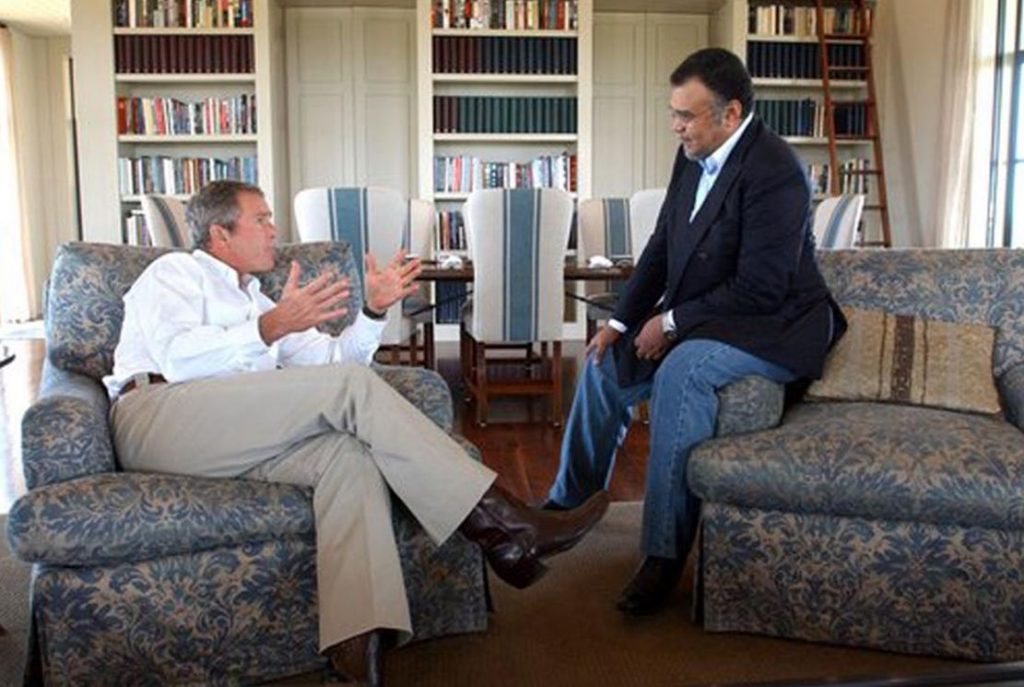 George W. Bush chats with family friend Prince Bandar bin Sultan al Saud in 2002. According to an FBI document, the former Saudi ambassador to the US sent at least one check for $15,000 to a Saudi national linked to the 9/11 attacks on America.  Photo credit:  White House / Wikimedia

In a most awkward passage for the Bush White House, it appears Bassnan even received direct payments from former Saudi ambassador to the US (and close Bush family friend) Prince Bandar bin Sultan al Saud:

• “On at least one occasion, Bassnan received a check directly from Prince Bandar’s account. According to the FBI, on May 14, 1998, Bassnan cashed a check from Bandar in the amount of $15,000.”

Prince Bandar resigned as ambassador to the U.S. in 2005, but has held other high government positions for the Kingdom since.

A number of other suspected Saudi agents with links to the hijackers are mentioned throughout the chapter, all according to FBI and CIA documents.

Of course, the spin machine kicked into high gear Friday, with the White House and Director of National Intelligence repeating earlier claims that the information in the 2002 report was followed up on by the 9/11 Commission and found to be innocuous.

A statement from the office of the DNI on Friday read: “The 9/11 Commission built on existing investigations and information, including that of the Joint Inquiry, but had greater access to senior officials and classified information. Its final report concluded that it ‘found no evidence that the Saudi government as an institution or senior Saudi officials individually funded [al Qaeda].’ ”

Countless mainstream media entities obediently followed suit, deferring to the vague conclusions of the 9/11 Commission, while ignoring the fact that the newly released chapter cited the FBI and CIA’s own documents.

Saudi Arabia’s foreign minister was happy to agree with that exoneration, conducting a well-prepared press conference within an hour after declassification of the material.

Countless mainstream media entities obediently followed suit, deferring to vague conclusions by the 9/11 Commission, while ignoring the fact that the newly released chapter cited the FBI and CIA’s own documents.

Unfortunately, the DNI narrative remains at odds with the objections made by multiple 9/11 Commissioners, themselves, who insist their team wasn’t actually allowed to follow all leads involving Saudi Arabian nationals.

“Evidence relating to the plausible involvement of possible Saudi government agents in the September 11th attacks has never been fully pursued,” Commission member Bob Kerrey wrote in a statement submitted in the 9/11 victims’ suit against Saudi Arabia.

One Commission investigator, Dana Lesemann, was even fired by controversial director Philip Zelikow for being too aggressive in pursuit of the Saudi angle.

Zelikow, a Bush White House policy advisor who maintained contact with influential White House Senior Advisor  Karl Rove throughout the Commission’s investigation, rejected much of the Saudi-related material his team submitted. He then re-wrote the entire section before it was sent to publishing, concluding “we have found no evidence that the Saudi government as an institution or senior Saudi officials individually funded” al Qaeda.

Almost all soft pedaling emanating from the media, the White House, the DNI and the Kingdom since Friday, in reaction to the Joint Inquiry material, rests entirely on that sentence from the  9/11 Commission’s contentious conclusion.

The Jersey Girls, widows of 9/11 victims, on Saturday offered a searing indictment of the Kingdom, the Bush White House, and the media’s subdued response. One bit of perspective, in particular, stood out:

Note that these 29 pages merely detail the Saudi connection to the 9/11 attacks in San Diego. They briefly touch on the Phoenix information, as well. Though more notably, the 29 pages do not include information found in the more than 80,000 documents that are currently being reviewed by a federal judge in Florida — 80,000 documents that neither the 9/11 Commission, the Joint Inquiry, the Clinton, Bush, or Obama White House, nor the Kingdom of Saudi Arabia wants us to know about.

Those documents likely have a lot to do with the notorious Saudi couple in Sarasota, covered extensively by WhoWhatWhy in 2011. They allegedly had extensive links to the attackers, then vanished without a trace days before the attacks.

His claims that the 9/11 directive went as high as the Saudi royal family, among other explosive testimony, were dismissed as the ravings of a mad man. Lawyers for families of 9/11 victims, filing suit against Saudi Arabia, felt Moussaoui “was of completely sound mind — focused and thoughtful.”

Despite the release, it remains doubtful the Beltway has the stomach for a new round of congressional investigations into the attacks. Still, a new investigation seems entirely warranted. Graham has expressed concern that continuing to give Saudi Arabia a pass on this evidence only emboldens elements within their government that enable global terrorism. He cites the rise of ISIS as a perfect example.

It is clear the past two administrations, their intelligence branches, and the Saudi government all fought very hard to keep this information hidden from the public for over a decade. They then suddenly “welcomed” its release at the 11th hour when the pressure was unbearable. Now, they’re all curiously uniform in their statements to the press, responding to the material they didn’t want declassified.

While it remains to be seen if anyone is held accountable for more than a decade of stonewalling and obstruction on this issue, continued whitewashing on this chapter of history is no longer accepted.