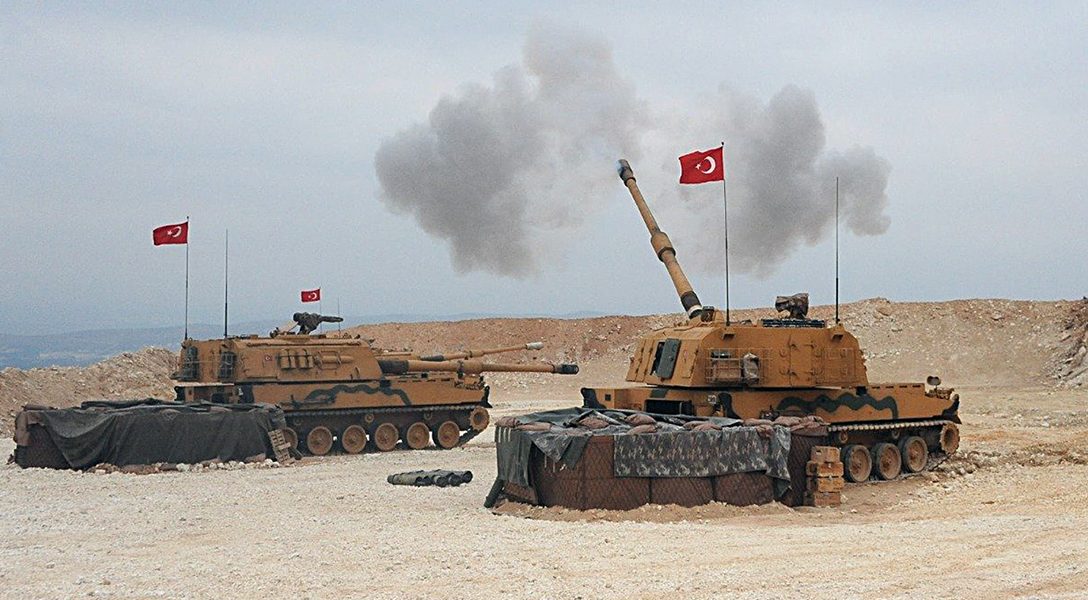 Turkey has now embarked on its grand plan of taking over northern Syria, crushing a fragile experiment in radical democracy that US allies have been building there and resettling the area with refugees. But the Turkish invasion is likely to backfire, experts say, with US enemies ranging from ISIS to Russia, Iran, and the Syrian regime standing to gain the most.

Syria is already a quagmire that would bring headache to any occupier — a major reason why President Donald Trump decided to pull US troops out of the Turks’ way on Sunday — and Turkey can count on little support from its traditional NATO allies. In fact, it already faces “sanctions from hell” by Congress over its operation, as Senator Lindsey Graham (R-SC), the sponsor of a new sanctions bill against Ankara, put it in a tweet.

I am pleased to have reached a bipartisan agreement with Senator @ChrisVanHollen on severe sanctions against Turkey for their invasion of Syria.

While the Administration refuses to act against Turkey, I expect strong bipartisan support. pic.twitter.com/Ph5fIVt7k3

Turkish President Recep Tayyip Erdogan, who renewed his threats to flood Europe with refugees in response to criticism over the operation, has domestic reasons to embark on his dangerous adventure. His party, in power for over a decade and a half, lost the country’s largest cities in municipal elections a few months ago.

“A war always helps unite people on the home front by stirring up nationalism,” Jenny White, a prominent Turkey analyst at Stockholm University, told WhoWhatWhy. She nevertheless noted that Turkey, which has fought a four-decade Kurdish insurgency on its soil, has legitimate concerns about the emergence of a Kurdish statelet in northern Syria.

“President Erdogan no doubt is counting on this war to regain some of the support he and his party have recently lost,” White added.

Yet it is so difficult to imagine a clear Turkish victory in Syria that some analysts doubt whether Erdogan is interested in more than just loudly rattling his saber.

Norway, another NATO ally, and Finland took the same step the other day.

“Turkish forces will most likely take [the towns of] Ras al-Ayn and Tel Abyad, stop there, and declare victory,” tweeted Dimitar Bechev, a prominent regional geopolitical expert at the University of North Carolina at Chapel Hill: “Lindsay [sic] Graham will take credit for stopping a takeover of the entire northeast Syrian region. Trump will too.”

It’s not that Turkey, which boasts the second-largest army in NATO, cannot take over northern Syria. It’s just that, once there, it will be a sitting duck for seasoned adversaries that include the Syrian government, Russia, Iran, and just about everyone else in the region. If there’s one extraordinary international achievement that Erdogan can already boast, it is that he has managed to unite Iran and Saudi Arabia in criticism of his operation.

Border residents are hostile to the Turks and their local Arab allies, many of the latter radicalized rebels uncomfortably close to Al Qaeda in their ideology. In a 2018 rogue operation widely seen as a dress rehearsal for the current invasion, Turkey incurred widespread accusations of war crimes — including by the UN, which nevertheless noted that Turkey’s direct involvement in specific acts of pillaging and ethnic cleansing was hard to prove.

If you cannot see what Erdogan is doing, I don't know what to say! pic.twitter.com/y015SAgLP5

Resettling refugees in the newly captured areas would be problematic also, for reasons other than that it might constitute a war crime. Turkey could be forced to stay in Syria indefinitely in order to protect its safe zone, and hostilities could spill back into Turkey proper, where the Kurds make up roughly a quarter of the total population.

“Turkey cannot leave,” White said. “If Turkey doesn’t leave, it is unlikely that the Syrian government and its Russian godfather will let it stay. The humanitarian costs will be great and ripple in all directions, including Turkey, where both Syrians and Kurds will likely become targets for [Turkish] nationalist rage.”

Turkey also runs the risk of spreading its forces thin, ruining a rare chance to settle Syria’s brutal civil war, now in its eighth year. Last month, a breakthrough was achieved in efforts to form a constitutional committee that many see as a possible means for reconciliation, albeit a distant one.

“The US government has great hopes for the constitutional committee, which it believes can move Syria toward elections, overseen by the United Nations, that will replace President Assad,” Joshua Landis, a prominent Syria expert at the University of Oklahoma, told WhoWhatWhy. Speaking shortly before Trump decided to pull US troops back, Landis added that this is a key reason why the US is keeping a force in northern Syria in the first place.

“The Syrian government will do everything to thwart this effort. It claims that it has won the war and will not be defeated by economic or diplomatic pressure now that the military pressure is over. The Syrian government seems to have the upper hand in the contest to determine the future of Syria.”

Turkey Threatens New Syria Operation as US Shunned at Summit

Trump’s Decision to Abandon US Allies in Syria: More Than Meets the Eye

Turkish-backed forces, thousands of whom are now engaged in the campaign against the Kurds, are already under pressure in Idlib, a province west of the Kurdish-held areas, which is the last remaining major rebel stronghold. In August, the Assad regime, backed by Russian air power, made steady gains there, encircling a Turkish army post. With Turkey distracted elsewhere, the balance of power in Idlib would shift even further in favor of Syria, Russia, and Iran.

For Moscow, the Turkish invasion also presents an opportunity to strengthen its role as a power broker in Syria, initiating talks aimed at Assad’s takeover of the northeast while seeking to stay on Turkey’s good side in an attempt to drive a wedge inside NATO.

A well informed source covering the #UnitedNations tells me #Russia made it clear that it won't sign off on anything about #Turkey's campaign in N/E #Syria from the UNSC beyond a simple vague press statement read at the UN. Any resolution against Turkey would be killed by Russia.

Reports on Friday that Turkish troops targeted US special forces with artillery show just how chaotic and volatile the situation on the ground is.

Meanwhile, the war against ISIS has already been put on hold as the Kurds, who have borne the brunt of the ground war against the terror group, scramble their best units to protect themselves from the Turkish onslaught. The fate of about 12,000 ISIS prisoners, whom Turkey has said it would take over from the Kurds, worries most observers — for years, Turkey has been accused of collusion with ISIS.

“This is a recipe for disaster, be it for the Turks, the Kurds or us,” an anonymous high-ranking European diplomat told Reuters. “This Turkish intervention is a complete distraction that will open up a Pandora’s box.”