Just when US-backed and Kurdish-led forces have encircled the Syrian capital of ISIS, Raqqa, a threatened Turkish invasion could undermine the war against the terror group. Even without meddling from the country that hosts NATO’s second-largest army, the United States is facing formidable odds in trying to pacify areas liberated from ISIS. Turkey’s new incursion, directed against the Kurds, could turn Syria into another Middle Eastern quagmire for the US.

Amid an exchange of apocalyptic threats with North Korea, a deepening military involvement in the Middle East, a spat with Russia and worsening relations with the European Union, the administration of President Donald Trump has stretched itself thin in foreign policy. Both friends and enemies are becoming increasingly prone to test Trump, experts say. Chaotic Syria, where it is often difficult to say who exactly is attacking whom and why, is perhaps the best example of that.

“Everybody is testing Trump, everybody is trying to figure out what his real policy is because nobody believes anything he says,” Joshua Landis, a prominent Syria expert at the University of Oklahoma, told WhoWhatWhy. The US president is caught between contradictory goals and promises at home and abroad, Landis and others added, and rival powers are positioning to take advantage of this in order to gain leverage against him.

In April, Syrian President Bashir al-Assad allegedly used chemical weapons against civilians, in what observers interpreted as a test of Trump’s foreign policy resolve. The US president responded with a missile strike against an airfield. Now Turkey is preparing to attack the most reliable Western ally on the ground against ISIS, and many believe that only massive US pressure not to interfere with the storming of Raqqa is holding it back.

Turkish and allied forces already control a pocket of territory in northern Syria, where they have sought to carve out a buffer zone for refugees and rebels fleeing the Assad regime. In addition, Turkey wants to drive a wedge between the Kurdish-controlled territories in the country. An attempt to advance further south was blocked in March by combined American and Russian forces.

With small-scale skirmishes between Turkish-led and Kurdish-led forces an almost daily reality in that area, a new large-scale Turkish attack is expected to freeze the Kurdish front against ISIS. 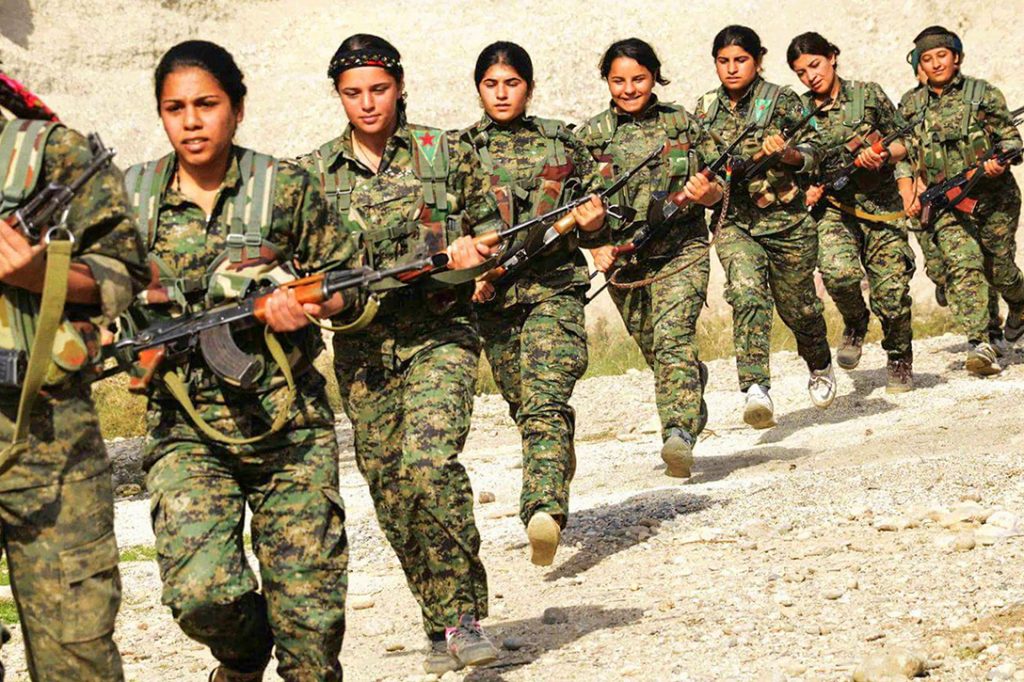 Kurdish fighters have proven to be an essential ally to the US in the continued battle against ISIS forces in Syria.
Photo credit: KurdishStruggle/Flickr(CC BY 2.0)

“Turkey has made a decision to challenge the US in a way it did with Russia when it shot down the Russian plane [in 2015],” Landis said. “In that situation, Turkey quickly backtracked when Russia showed its teeth. But it’s unclear what kind of leverage the US has with Turkey.”

Ankara’s threat of breaking ranks with its NATO allies also comes as part of the rapid collapse of the Western camp’s strategy in Syria.

“I’d say [the situation in Syria is] currently in a stalemate but there is no such a thing as the Western coalition led by the US anymore,” George Voloshin, an expert at Aperio Intelligence, a UK-based strategic intelligence company, told WhoWhatWhy.

“The Trump administration is hostage to inertia…. Support in Europe for the Syrian war has been waning dramatically: the UK government is in a flux over Brexit … and France’s Macron recently admitted that the departure of Assad was no longer a prerequisite [for a solution in Syria].”

On the other hand, neither is the victory of the Syrian government, backed by Russia and Iran, assured. This is partly because the regime, most of it hailing from a minority religious sect, is short of manpower. Another major obstacle is that the government doesn’t control the entire border. Neighboring states such as Turkey can send arms and reinforcements to the rebels.

“When they ramp up, their opponents will ramp up as well,” said Voloshin. “So the Syrian government is trying to consolidate its position around Aleppo and other cities, but it cannot occupy the whole country.”

While well-positioned to play spoiler in the Syrian quagmire, Turkey also has more at stake there than just about any other regional actor involved. Ankara has fought a home-grown Kurdish insurgency for decades, and now, with its policy of support for different radical groups with the goal of toppling the Syrian regime backfiring, it is facing a growing Kurdish statelet on its southern border that it considers an existential threat.

Peace talks between Turkey and the Kurds collapsed in 2015, as President Recep Tayyip Erdogan’s much-publicized dive into authoritarianism accelerated. While experts say that increasing use of drones by the Turkish army has decimated the PKK — the main Kurdish guerrilla group in Turkey with links to the Kurdish militants in Syria — months of intense urban warfare have left several Turkish cities in ruins. Erdogan’s incessant attempts to meddle in the Syrian civil war meanwhile have brought millions of Syrian refugees into Turkey and have gained him scores of new enemies, including disgruntled former jihadist allies, the Syrian government, and an empowered Kurdish movement.

“The PKK has really suffered a lot inside the Turkish context,” said Ege Seckin, a Turkey expert at the London-based analysis firm IHS.

“But in the south [Syria and Iraq] they still have a very advantageous position owing to their continued support from the US. And they are counting on this in turning their bigger disadvantage in the Turkish arena, but this safe haven which they have managed to carve out is something that is really going to give Turkey a headache for a long time to come.”

The problem for the US in this context is that Turkey can easily make the war against ISIS very costly in order to gain leverage against Trump, says Landis. Even without meddling, pacifying the vast swathes of Syria occupied by ISIS, once the terror group has been driven out of there, could rival in complexity the operations in Afghanistan and Iraq.

For hundreds of years, he added, the conquerors of eastern Syria have been forced to resort to divide and conquer policies in order to keep the disparate Arab, Kurdish and Assyrian tribes competing for sparse resources in the desert area under control. In the absence of a strong unifying national identity and state institutions there, the US administration may not have any better options than to continue this precarious policy of pitting one group against another.

“America is going to be the sultan of eastern Syria, and ultimately will have to use terror as well as patronage, not unlike ISIS,” Landis said.

Turkey, long NATO’s main Middle Eastern anchor, is threatening to make the American strategy of supporting the Kurds in Syria even more precarious. With US opponents such as Iran and Russia dominating much of the battle field, just the cost of resupplying US and allied forces on the ground would go through the roof if Turkey blocked resupply lines through its territory, Landis added. An invasion, or even a string of limited incursions to keep the pressure on the Kurds up, could be even more destructive.

Adds Landis: “All Turkey has to do, is make it impossible for America to win, the Kurds to win — which it can do: it has got the firepower.”

10 responses to “Is Turkey about to Test Trump with New Syria Attack?”