The Radical Experiment in Democracy That Defeated the Islamic State in Syria - WhoWhatWhy
Reading Time: 4 minutes 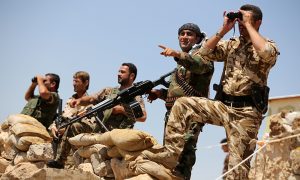 Syrian Kurdistan, or Rojava as the Kurds call it, is the site of a surprisingly successful experiment in decentralized participatory democracy. Among its recent triumphs: a lopsided victory over the Islamic State militants, a task that mightier national militaries haven’t achieved.

Yet its existence has been barely acknowledged by the U.S. and its allies in the battle against IS. That seems to be the fate of the Kurds—their feared peshmerga fighters are called on to do the heavy lifting in both Iraq and Syria while other players dominate the headlines.

Considered by many to be the largest stateless people in the world, the 28 million Kurds are spread across Iraq, Iran, Turkey and Syria. And Rojava itself – along the northern border of Syria adjoining Turkey—has emerged as a heartening case study in creating “a democratic system for people without a state.”

Though the Kurdish resistance in Kobani gained the Rojava experiment some international attention, its future remains highly uncertain. In a region where competing ideologies fight to the death and powerful nations clash over access to energy resources, Rojava represents a very small player indeed.

As Joshua Landis, a prominent Syria expert at the University of Oklahoma, told WhoWhatWhy: “It would be a big surprise if the Kurds brought radical democracy to the Middle East.”

Of course, you never know. Especially in the Middle East, where practically nothing can be predicted with certainty—except uncertainty.

And the movement is certainly impressive. It is even more impressive considering its origins. The man who set forth the vision behind Rojava, Abdullah Ocalan, was the jailed leader of a listed terrorist organization. The terrorist organization is the PKK, or the Kurdish Worker’s Party. The U.S., U.K., and NATO all list the PKK as a terrorist group, largely due to its actions over a three-decade insurgency in Turkey that reached a truce in 2013.

In accord with Ocalan’s vision, popular assemblies and councils chosen with a mandate to preserve ethnic balance do most of the decision-making in the autonomous province. And the Rojava government has managed to grant significant civil liberties, including a guarantee of full and equal rights for women.

There is even a new Rojava army of women warriors known as the YPJ. But Rojava—and the flickering hope it offers for the survival of more inclusive ideologies in the Middle East—is still marginalized despite its resounding victory.

In the northern Syrian town of Kobani, Kurdish forces—whose numbers included elderly women, so-called “grannies with Kalashnikovs” armed as a last line of defense—waged a staunch counter-offensive against IS militants. If Kobani had fallen, the Islamic State would have controlled 125 miles of unbroken territory along the Turkish border. And the Kurdish democratic experiment would have suffered a significant blow.

Instead, the Kurds in Syria are successfully challenging the U.S.’s  late 2014 assertion that “[American military forces] don’t have a willing, capable, effective partner on the ground.” That may be one of the reasons why the U.S. has shifted tactics in the region and why U.S. fighter jets supported the defense of Kobani with an ongoing air campaign. This 180-degree tactical shift is just the latest inconsistency in its foreign policy in the region.

Similarly, little to no attention has been paid to the Kurdish role in turning back IS in Iraq. Kurdish fighters from both the Syrian group and the PKK helped free members of a trapped ancient sect from Mount Sinjar in Iraqi Kurdistan. When U.S. jets supported this operation, it marked the first American airstrikes in Iraq since the United States withdrew its forces in 2011.

Washington’s strong ties with NATO ally Turkey undoubtedly have something to do with American reluctance to fully back the region’s Kurds. So far, the U.S. has gone out of its way to accommodate the Turks—who are deeply suspicious of the Syrian Kurds because of their links with the PKK.

The Kurds themselves claim that the Turkish army has openly colluded with the Islamic State, by allowing the jihadists to transit fighters and weapons through its territory; credible reports appear to confirm that IS militants have attacked Kobani from Turkish soil. The Turkish government denies these claims.

Turkey, home to more than half of the world’s Kurds, worries that the flames in Syria could ignite insurrection in its Kurdish regions. More than 40 people died in Kurdish areas during riots over Turkey’s alleged aid to the IS forces in Kobani.

The riots are the latest manifestation of the Kurds’ centuries-long struggle for autonomy. They are one of the oldest indigenous ethnic groups in the Middle East. Without a state of their own, they have repeatedly faced brutal oppression—including the mass murder with chemical weapons of some 5,000 Iraqi Kurds by the late Iraqi dictator Saddam Hussein in 1988.

The residents of Kobani expected no better fate at the hands of the Islamic State if they surrendered. Though armed with relatively light weapons, they defeated jihadist forces that had overrun the far more numerous Iraqi and Syrian armies, from which the IS militants had commandeered their tanks and artillery.

One odd factor that might have contributed to this victory: IS militants apparently feared the elderly Kurdish women fighters more than U.S. fighter jets. The jihadists are said to believe that being killed by a woman would deprive them of the promised virgins in paradise.