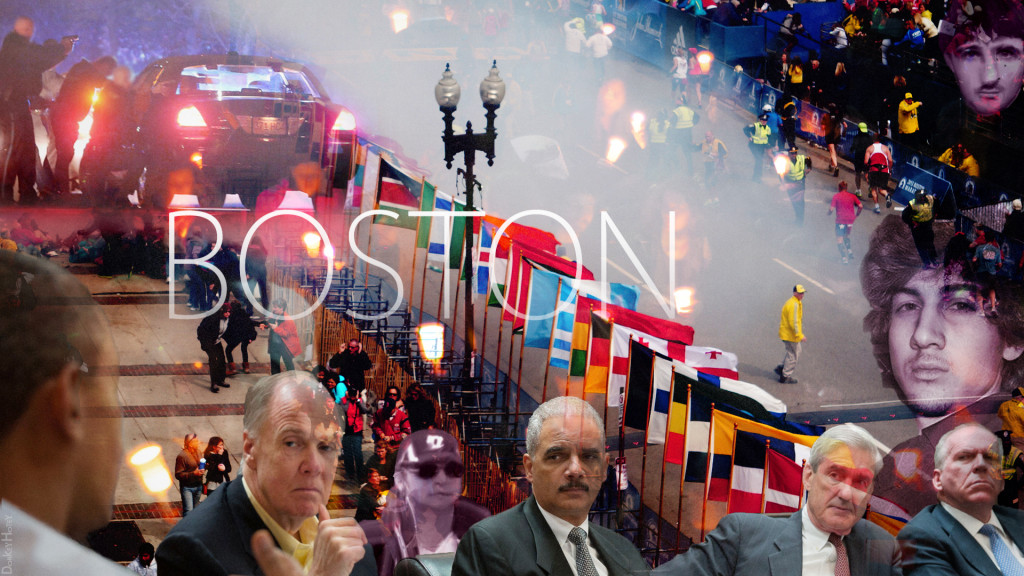 The Boston Bombing Trial Starts, But Answers Aren’t on the Docket Photo collage of the Boston Marathon Bombing. By DonkeyHotey.

We do not know what will come out of the trial of Dzhokhar Tsarnaev, but one thing we are pretty sure of: we will not get the real, complete story of what actually happened.

Keep this in mind: the prosecution’s job is not principally to fully explain the background of a crime that was committed. It is to convince a jury to convict. Also, in cases such as this, where a lot of questions about security state operations have been raised, the prosecution, as an arm of the federal government, will be under strict orders to win its case without unduly exposing “sources and methods.” That’s a  polite way of saying, “let’s keep the skeletons in the family closet.”

Lead defense counsel Judy Clarke’s job, and her historic role in past cases, has been to do whatever is necessary to ensure her client avoids the death penalty. Meanwhile, the defendant’s job, right now, is to do what his lawyer tells him. It’s not his job to object or say, “Hey, there’s more to this story.”

Clarke’s interest in exposing the truth is strictly limited to: A) using the threat of embarrassing the government or B) casting doubt on its narrative solely as a bargaining chip to keep her client off death row. She has no particular mandate to find out what really happened. Even by her own pronouncements, Clarke either believes her client is guilty or, perceives that the only practical way forward is to accept that her client will be found guilty.

So don’t hold your breath for explanations to some of the questions we’ve raised. They include:

-What actual evidence exists that these brothers made such a sophisticated bomb—which some experts say they could not have? If not, then they had help and did not act alone, as the government insists. Aren’t the identities and roles of other possible players germane?

-What actual evidence exists that these brothers had bombs with them—and detonated them? Pictures of the backpacks that exploded to some people don’t look like the ones the brothers were wearing.

-What actual evidence exists that these brothers shot and killed an MIT police officer? We’re told that video cameras captured the act, but we’re also told that the video doesn’t make a positive ID.

-Did they actually carjack a man, and if so, for how long and under what circumstances? As we have reported, the purported victim, whose identity has not yet been disclosed, substantially changed his story of what happened.

-Why did the brothers’ uncle, who was the son-in-law of an important CIA official, quickly announce (within hours of their death/apprehension) his suspicion that his nephews were indeed the Boston bombers, despite the fact they had never done anything like that nor indicated that they may do such a thing?

-And what about the other CIA associate, a college professor and former case officer who corresponded with Dzhokhar Tsarnaev about Chechnya? Soon after the bombing, the professor, Brian Glyn Williams, was quoted as saying “I hope I didn’t contribute,” an apparent reference to Dzhokhar’s alleged radicalization.

-Why did the FBI seemingly ignore warnings from the Russians that the elder brother was involved in radical activity?

-Why did the FBI harass rather than seek to obtain information from crucial witnesses?

-After being warned by the Russians, why did the FBI fail to monitor Tamerlan when he left the country to travel to restive regions of Russia where Islamists were active? And then how was it that an alert for him was lowered just before he re-entered the U.S.?

-Why has no one been allowed to talk to Dzhokhar to find out his version of events?

-Will the authorities ever explain why so many things that were leaked by the government to prejudice the public (and the jury pool) turned out to be untrue? The claim that Tamerlan Tsarnaev was guilty in a triple homicide in Waltham, Mass., is just one example. The police never questioned Tamerlan about the slayings, even though they knew he was close friends with one of the victims.

-Will the conflicting and dubious explanations about the FBI’s shooting of an unarmed Ibragim Todashev, friend of Tamerlan, in his Florida apartment while being interrogated, be resolved?

-What about claims that there were drills going on during or around the time of the Marathon—and why were there bomb-sniffing dogs at the finish line? Even the cautious Boston Globe noted that officials had planned a training drill eerily similar to what actually happened.

These are some of the things any fair-minded, thoughtful person would like to know.

But the whole thing appears to be sealed, a done deal. We’re hoping for revelations at the trial. But we aren’t expecting too many. The authorities don’t think we need to know much about our country and its doings in that shadowy arena called “national security.” So the chances of them wanting to enlighten us are depressingly slim.