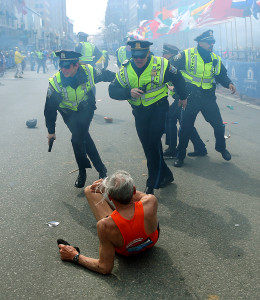 As the defining domestic national security event since 9/11, the Boston Marathon Bombing has played a major role in expanding the power of the security state. Although the media quickly accepted the government’s assertions that it had captured the culprits, that the culprits were “lone wolves” and that there was nothing more to the story, an ongoing exclusive investigation by WhoWhatWhy, launched the week of the event, suggests otherwise.

In the course of our inquiries, we have found and documented a veritable mountain of dubious official claims, inconsistencies and outright lies—plus a concerted campaign to prejudice the public regarding the accused, prior to trial. We have also reported on a campaign of harassment against prospective witnesses whose knowledge might cast doubt on the accepted narrative. We have made no judgments or claims about guilt or innocence, but we are certain that the full story has been obscured from the very start. The big question? Why.

We intend to keep pressing for answers, so stay tuned to WhoWhatWhy for additional exclusive coverage through the trial of Dzhokhar Tsarnaev and beyond. In the meantime, you can get up to speed with this hand-picked selection of our most essential stories below. (Here’s the full list of our coverage from the beginning.)

The FBI’s War on Boston Witnesses: Why has the FBI been harassing, deporting (and, in one case, killing) friends of the Tsarnaev brothers? This makes no sense if, as the government has claimed, the brothers acted alone. Do these people know something the Bureau doesn’t want them to reveal?

Was Tamerlan Tsarnaev a Double Agent Recruited by the FBI? Peter Dale Scott examines the possibility that Tamerlan Tsarnaev was an FBI informant who also worked with the Russians. The documented fact the FBI knew and interacted with him prior to the bombings suggests there’s more to the story.

The Marathon Bombing: What the Media Didn’t Warn You About: Our immensely popular post by Editor-in-Chief Russ Baker, published four days after the bombing, was perhaps the first moment at which anyone raised doubts about the rapidly “concluded” investigation and the media’s coalescence around an official narrative. It remains essential reading for real “media literacy” and healthy skepticism toward institutions that have repeatedly misled the public.

Boston MIT Cop Cover-Up:  Russ Baker chronicles a pattern of dissembling and inconsistencies in the official accounts of the execution of an MIT police officer—an event that was crucial in the public portrayal of the Tsarnaevs as murder-minded men.

Boston Carjacking Unravels: Part 1  and Part 2:  Our exclusive investigation uncovered serious factual discrepancies between various accounts provided by the mysterious “Danny,” the sole witness to Tamerlan Tsarnaev’s purported confession to the bombing and to the MIT cop’s killing. Given this anonymous person’s centrality to the official narrative, these clashing stories call into account the entire bombing story told by the authorities and passed along uncritically by the media. For more, please watch Russ Baker speaking to Boston’s public television station WGBH about our discoveries:

There are 67 comments Our Comment Policy: Keep it civilized, keep it relevant, keep it clear, keep it short. Please do not post links or promotional material. We reserve the right to edit and to delete comments where necessary.