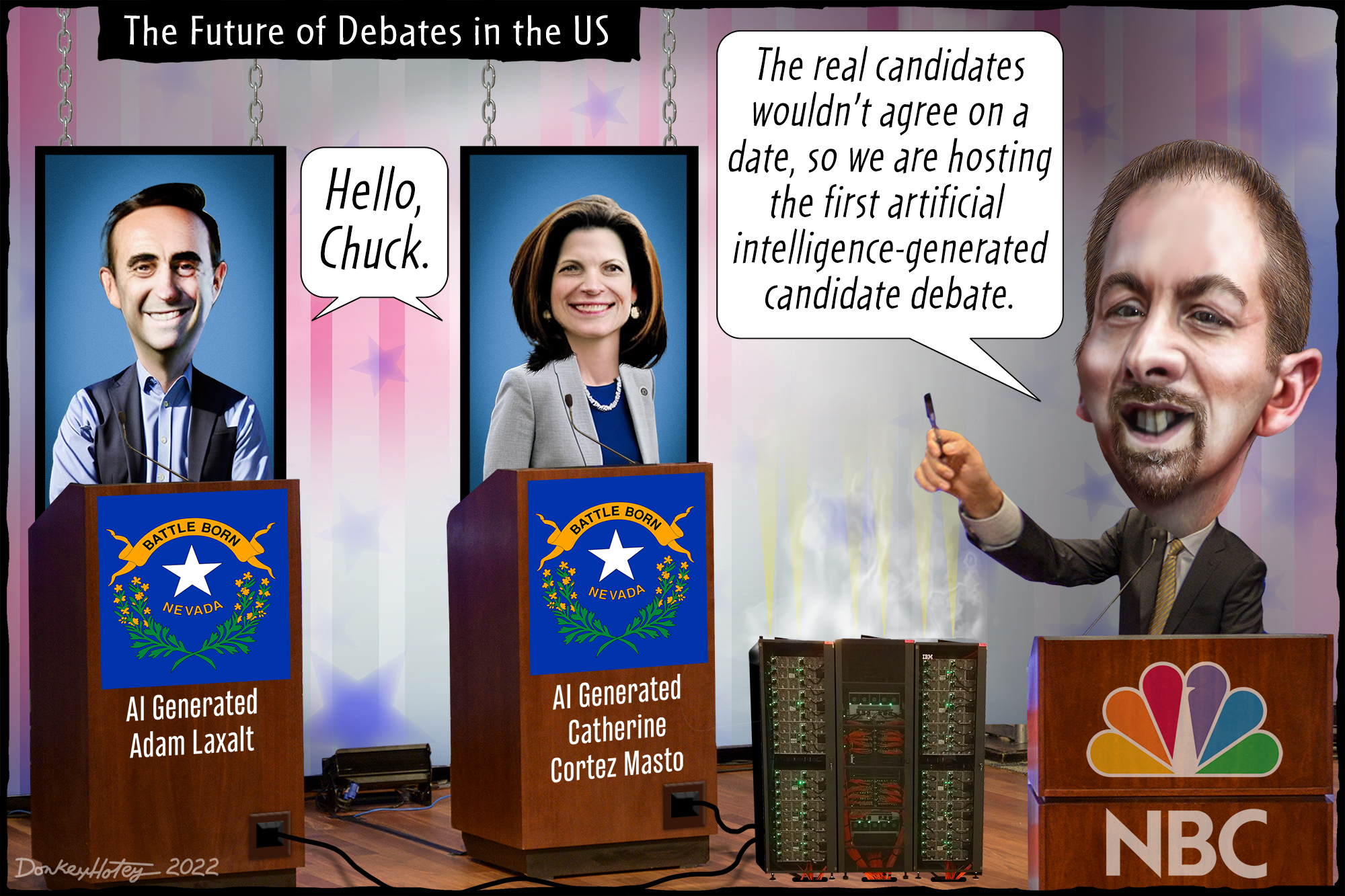 Politicians are so predictable it would be easy to build an AI model for a debate. The technology exists. Photo credit: DonkeyHotey / WhoWhatWhy (CC BY-SA 2.0) See complete attribution below.
Cartoon

Over the past couple of decades, we have seen a lot of changes to US elections. Nearly all of them have been bad. Corporations are people now; minority voters not so much. The peaceful transition of power is not a thing anymore, and neither are competitive congressional districts. One constant that has remained is televised debates. Which makes sense because they are a completely useless relic of a different era and have morphed into a total waste of time.

Before we look at why they have become so pointless and who is to blame for it, let’s first look at what debates could, and should, be.

Ideally, televised political debates would allow well-informed, open-minded voters to get to know the candidates and form an educated opinion on who should represent them in Washington.

These candidates should be accomplished and knowledgeable. With the heavy burden of carrying the affairs of a nation on their shoulders, they should be the best of the best. The candidates should have clear ideas of how they would solve the country’s problems and be able to articulate them. Also, if you are running for Senate, it would be great if you were a resident of the state you are competing in… (more on that below).

To make sure that all of these debate goals are accomplished, fair, no-nonsense journalists would ask tough questions and follow up if the candidates give false or evasive answers, or don’t seem to know what they are talking about.

You are probably either laughing or crying right now because, obviously, none of these things is happening.

Few voters have an open mind, and even fewer are truly well informed. And voters who are open-minded and well informed are as rare as mythical beings such as unicorns, dragons, or senators under the age of 40.

By itself, this would be bad enough. Sadly, that’s the least of our problems. Much worse is that many candidates are complete morons, despicable human beings, or, in many cases, both.

As per usual, it’s the GOP leading the way. While Democrats may often not be sending their best (although certainly their oldest), Republicans are counting on a crop of candidates that would make the Sons of Liberty reconsider throwing the tea in the Boston Harbor and instead take their chances with the British monarchs.

As we have often documented, the GOP has spent the past 30 years turning the House of Representatives into a House of Horrors. And this year’s Republican Senate candidates are not much better.

In Georgia, Herschel Walker’s main skills seem to be running with a football and impregnating women to whom he is not married while preaching morals. On the other hand, he has been deemed worthy of carrying a toy badge around, so at least we know he is going to be tough on crime.

Elsewhere, noted New Jerseyan and TV personality “Dr. Oz” is vying to become the next senator of Pennsylvania for some reason.

And one state over in Ohio (well, two if you count from Oz’s home state of New Jersey), it looks as though a conservative author is going to be elected, who is so incredibly gullible that he believes there are “litter boxes in some of the school districts so kids can pee in them because they identify as furry.”

Apart from a stunning lack of qualifications, what these three candidates have in common is name recognition. And that’s really all it takes in the GOP these days because Republican voters will support anybody they are told to elect. As Walker’s case proves, there is no moral failing or intellectual shortcoming that they won’t excuse in the quest for power.

It’s actually difficult to imagine somebody who should be in the Senate less than Walker… well, apart from the January 6 insurrectionist who pooped in Congress. And Ted Cruz.

A real debate with real moderators asking real questions to inform an audience that really cared would quickly expose a candidate like Walker as a serial liar and complete dolt.

And that brings us to the role of the media. Not surprisingly, it is utterly falling down at its job.

To be fair, in light of the aforementioned challenges, even the most skilled journalists would have a hard time moderating a debate between subpar candidates to inform a public that is uneducated and disinterested.

Unfortunately, you won’t find the most skilled journalists anywhere near these debates. Instead, we usually get talking heads who seem more worried about their own “brand” and continued access to the candidates than helping the public make informed decisions on who should lead the country.

The rest of the media is failing spectacularly as well. Journalists do as poor a job of covering debates as the election as a whole.

To them, it’s all about getting clicks to make a few more bucks for the billionaires and hedge funds owning their newspapers and TV stations.

Part of that means ginning up interest for pointless debates. But how do you do that when one of the adversaries is a know-nothing idiot like Donald Trump or Herschel Walker?

That’s what led to the creation of the “expectations game.” The point of which is to set the bar so low for one of the candidates that an ant couldn’t crawl underneath it.

Obviously, the expectations game distorts the outcome. How do you measure who “won” a debate if the dumber candidate “wins” by not eating the microphone because they “exceeded expectations?”

And, if you are wondering, this usually only works for Republicans. Let’s take the debate between John Fetterman and Dr. Oz tonight. A couple of weeks ago, Fetterman was attacked for using a closed-captioning program that helps him with the auditory processing of questions he is being asked. This is a common aid for people who have suffered a stroke and does not indicate that they are unable to intellectually comprehend a question. It’s more like a hearing aid than anything else.

But do you think that, if Fetterman manages to answer questions without any signs of major impairment, anybody will celebrate him for clearing this low bar? Of course not. It’s much more likely that the media, which made this an issue in the first place, will focus on any slurred words.

It’s just one more example of how dumb the expectations game is — and the media either falls for it, or perpetuates it every time it’s about some GOP oaf who reveals a total lack of understanding of a particular issue.

In any case, shouldn’t the expectation be that they are capable, have a plan, and can talk about it?

Fortunately, there is one tiny bright spot in an election cycle that otherwise does not bode well for democracy: Debates are dying a natural death. The number of them in competitive states has declined sharply. This year, there will be six. In the current format, that is still six too many. The real winners of this year’s cycle may be the voters of Nevada, where Democrats Catherine Cortez Masto and Republican Adam Laxalt couldn’t agree on any debates.

And the GOP has already indicated that its next presidential candidate will not participate in debates in 2024. Which is a prudent strategic decision. Even the most inept moderator would ask what the Republican nominee’s plan would be, and that’s not a question they want to answer.

What explains this drop? Most importantly, Republicans have realized that debates aren’t great for them. They only feel truly at ease in the nurturing embrace of Fox “News” segments in which they are portrayed as heroes.

Essentially, Fox is a GOP Super PAC, so why even risk going on TV elsewhere (apart from even more right-wing outlets like OAN)? After all, when “gotcha questions” loom like, “Who won the 2020 election?”, “Do you think pregnant 10-year-olds raped by their dads who can expect to die from complications during childbirth should be allowed to have abortions?”, or “Name any constitutional amendment other than the first two!”, what’s the upside for the Trumps and Walkers of this world?

In other words, for once it works in everybody’s favor that the GOP chooses candidates who are afraid of debating what they stand for in any forum to the left of a Klan meeting, an Oath Keepers rally, or a QAnon convention.

Good riddance, televised debates! That being said, it would be great to find a format that will add value going forward. Maybe hold town halls where voters ask all of the questions and an independent team checks the accuracy of answers.

Of course, the best solution would be having some better candidates and more informed, less partisan voters.