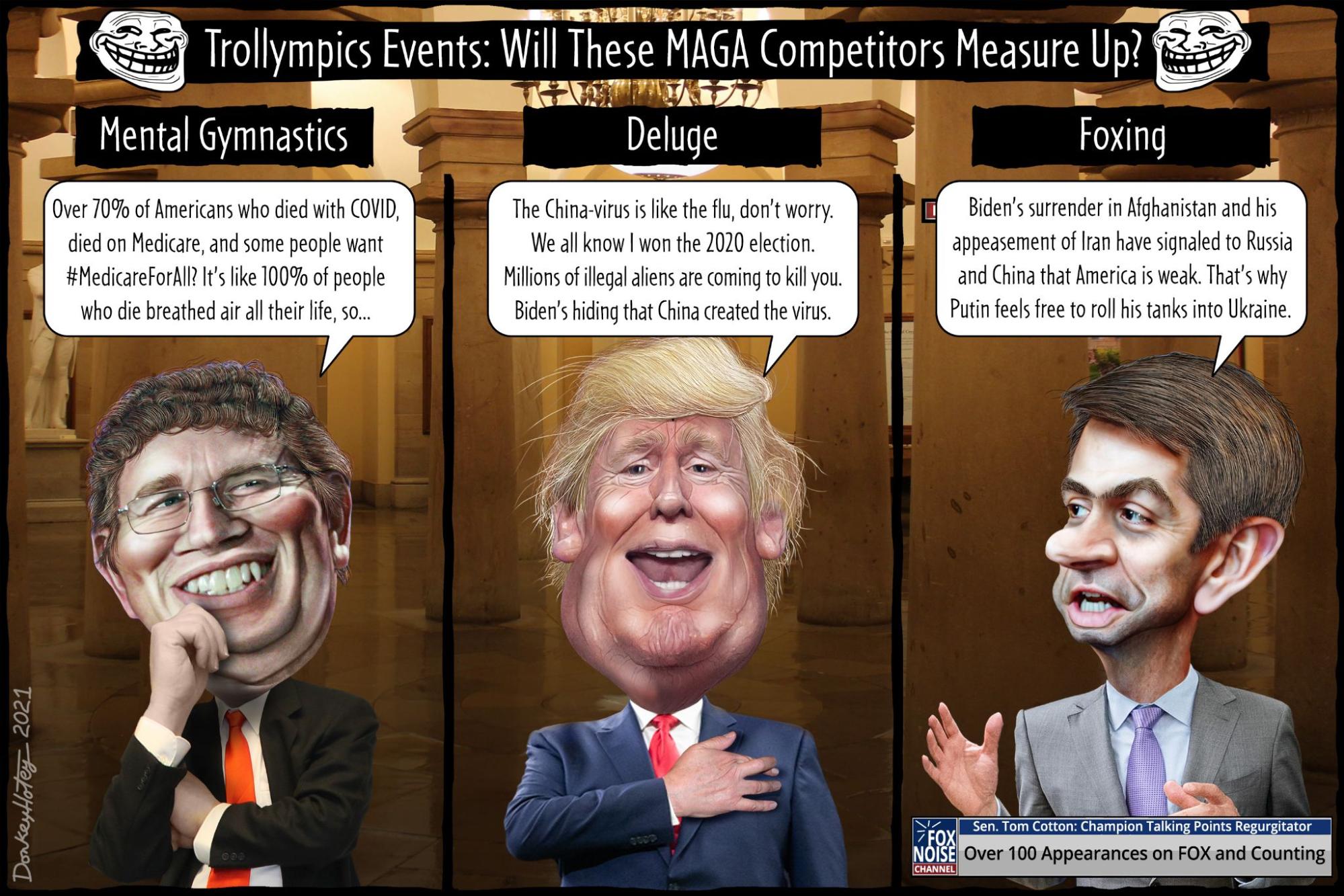 The Olympic Games are over, which means that some Americans may be feeling a bit of a void. After all, for the past two weeks they were able to experience the thrill of non-stop competition every time they turned on their televisions.

This might be especially true for Republicans because the Winter Olympics are such a natural fit for them: Everything is so white, and Scandinavians are the superior athletes.

Well, we have good news for them, because the Winter Olympics are not the only game in town. There is another high-stakes event for them to follow 24/7 on cable TV and the internet: the Trollympics.

If you are unfamiliar with this competition, that’s because we just invented it.

As everybody knows, the Olympics bring together young people from across the globe in pursuit of athletic excellence achieved through natural talent, hard work, and performance-enhancing substances. The Trollympics, on the other hand, bring together conservatives from across the US in pursuit of the one thing — apart from destroying democracy and creating a trickle-up welfare state for corporations and billionaires — they seem to care about these days: owning the libs.

Until now, the only rewards they got for their efforts were appearances on one of the many right-wing media outlets as well as campaign contributions from their like-minded followers. That just doesn’t seem fair. After all, this is what they spend most of their time on, and we thought that deserves recognition.

Like the Olympics, the Trollympics consist of a variety of disciplines. Some of them even sound alike.

For example, while the Winter Games have the luge, the Trollympics have the “deluge,” an event that celebrates lying so excessively that fact checkers are overwhelmed and eventually give up. It should come as no surprise that former President Donald Trump is the undisputed world champion of this event.

He is also a formidable competitor in “javelying.” While the similar-sounding discipline in the Olympics celebrates a stick being hurled a long way, “javelying” rewards the falsehood with the greatest staying power. In this case, the winner is clearly the Big Lie that Trump and many other conservatives are still perpetuating.

But not all Trollympics glory goes to the former president.

For example, QAnon wins “hateboarding,” while Sen. Tom Cotton (R-AR) takes home the gold in “foxing,” which is a discipline for politicians that involves them saying things for the sole purpose of getting invited onto a Fox News show. Last year, he was the only potential 2024 White House candidate who made it to triple digits.

Although they are obviously ineligible in the category above, various Fox News anchors are highly competitive in “softball,” for the most fawning interview of Republicans. In the end, Maria Bartiromo takes the crown ahead of Sean Hannity and Tucker Carlson.

While the Olympics have rowing, the Trollympics have “Jim Crowing,” an event that rewards states for enacting legislation that suppresses the right to vote or would make it easier to overturn election results. In a highly competitive field of 19 states, Texas wins the gold.

Speaking of, in the Trollympics, the vice president has the power to overturn any outcome… if he has the courage.

Next, there is “mental gymnastics,” in which the competitors have to make stupefying leaps of logic. The winner this time around is Rep. Thomas Massie (R-KY) for this tweet:

Over 70% of Americans who died with COVID, died on Medicare, and some people want #MedicareForAll ?

You have to be a special kind of idiot to believe that extending Medicare benefits to younger people would somehow cause more deaths, because the elderly, i.e., the people automatically enrolled in Medicare, die at a higher rate from COVID-19 and other diseases.

Massie, a graduate of the Massachusetts Institute of Technology, is no idiot, which shows that these kinds of things happen by design in many cases… though not when lawmakers like Reps. Madison Cawthorn (R-NC), Marjorie Taylor Greene (R-GA), or Lauren Boebert (R-CO) say dumb things, because evidence suggests they are genuinely stupid.

What all of these cases show, however, is that the Republican caucus in the House of Representatives has essentially become a troll farm, which is why many of these events are very crowded.

This includes any type of shooting competition, which seems like a natural fit for Republicans. Until now, the undisputed champion in this discipline was former Vice President Dick Cheney, who shot his hunting buddy in the face. However, with modern Republicans falling all over themselves to demonstrate their commitment to the Second Amendment, don’t be surprised if that changes.

Today, it may just be Christmas card photos in which GOP lawmakers like Massie and Boebert proudly show that they have armed their families better than Ronald Reagan armed the Contras. Tomorrow, don’t be surprised if Republican primaries devolve into actual gunfights.

One event you won’t see in the Trollympics is the biathlon because that just sounds too gay. It’ll be interesting to see if this event will be relabeled the “athlon” in Florida if Gov. Ron DeSantis (R) signs the “don’t say gay” bill into law that is currently making its way through the Legislature. Maybe it won’t be shown at all because the biathlon is a race… and Republicans don’t like to talk about race, either.