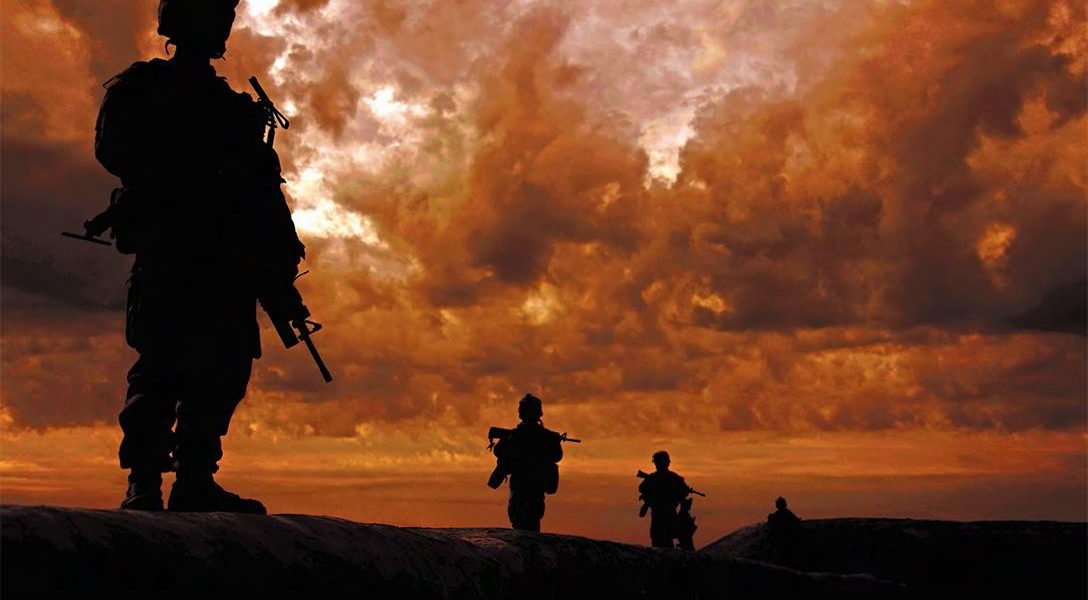 This presidential campaign has endured debates on a number of mundane issues, including the size of a candidate’s hands, who is more dishonest, and which candidate has the better temperament. One thing nobody is talking about is the staggering outcome of the war in Afghanistan — and that’s probably just the way those profiting from this trillion-dollar fiasco like it.

This month marks the 15th anniversary of the US-led intervention in Afghanistan, making it the nation’s longest war. It now appears, based on evidence gathered by a federal inspector general, that the whole undertaking was, and remains, an incredibly expensive disaster that has actually made Afghanistan more corrupt than it was before the US invasion back in 2001.

In one of his most stunning disclosures yet, the Special Inspector General for Afghanistan Reconstruction (SIGAR) revealed that, while the US Forces-Afghanistan reported that there were 319,000 Afghan soldiers, the actual number may only be 120,000. “Persistent reports” of discrepancies in Afghan troop strength “raise questions” over whether or not US taxpayers are actually paying for “ghost soldiers,” SIGAR John Sopko said in a letter to the Pentagon.

Bill Goodfellow, the executive director of the Center for International Policy, a nonprofit that promotes US foreign policy accountability and transparency, observes that despite reports like this, as well as the huge price tag and human cost, there’s been no discussion of Afghanistan in the presidential race.

“It doesn’t affect most people because the military is being staffed by economic conscription and the children of think tank analysts and journalists are not being drafted,” Goodfellow told WhoWhatWhy in a phone interview.

In his visits to Afghanistan, Goodfellow says, he has seen little evidence of the $115 billion that’s been appropriated by the US to rebuild that country. “When you go to Kabul you ask where is it? It’s in Dubai and in the pockets of US contractors,” he charged. “We’ve spent $800 billion on the war in Afghanistan and the 8,400 troops we have there now will cost $20 billion per year.”

Goodfellow sees little chances for a peace deal inside Afghanistan. He believes that as long as the US cash faucet remains open, there is just too much money to be made by all of the key players to do anything but prolong the war. “It provides powerful incentive for the elites,” said Goodfellow. “How do you make peace as lucrative as war?”

Developments in Iraq and Afghanistan show that, despite the loss of thousands of American lives,  hundreds of thousands of civilian deaths, and the expenditure of trillions of dollars, neither nation had the capability to defend itself once the US left.

This month is also the one-year anniversary of President Barack Obama’s decision to reverse course, ending his planned withdrawal of American troops. This decision may force his successor to continue US involvement in Afghanistan long after Obama leaves the White House.

The White House’s latest about-face came after the Taliban seized the northern city of Kunduz and held it for two weeks, and after the United Nations reported that the Taliban were as prevalent throughout the country as they had been at any time since 2001.

It was only two years ago that President Obama declared that the combat mission in Afghanistan was ending and that the country’s longest war was “coming to a responsible conclusion.”

There was a similar proclamation after the high-profile American withdrawal from Iraq in 2011.

Washington’s renewed troop commitment in Afghanistan comes at the same time the US is, once again, ramping up its presence in Iraq, helping that country take back territory lost to ISIS.

According to the office of the United Nations Secretary General, the first six months of 2016 saw a 4% increase in civilian casualties in Afghanistan compared to the same period in 2015.

As the violence has escalated, the Afghan Investment Support Agency reports a 30% decline in net investments being made in the beleaguered nation from last year. The Asian Development Bank blames “deteriorating security and law and order concerns” for the retrenchment. So how did this come to pass in Afghanistan?

Over the arc of his 30-year career, Sopko has worked as a prosecutor and a legislative counsel for Congressional oversight committees, as well as senior federal government advisor. He was an attorney with the Department of Justice’s Organized Crime Task Force.

Since July of 2012 he has served as Special Inspector General for Afghanistan’s Reconstruction. The voluminous quarterly reports that Sopko has filed with Congress provide blow by-blow-details on a reconstruction effort gone badly awry.

So far, SIGAR’s work has resulted in over one hundred convictions of a diverse roster of government contractors, active-duty and retired US military personnel, 91 of whom have already been sentenced.

SIGAR has recovered more than $951 million in criminal fines, restitutions, forfeitures, civil-settlement recoveries, and US government cost savings. Over 400 individuals and 355 companies were referred by SIGAR for suspension or debarment from government contracting.

“We have spent more in Afghanistan than we did on the entire Marshall Plan to rebuild postwar Europe,” Sopko told WhoWhatWhy (you can find the complete interview at the bottom of this article). “The American taxpayer has had to foot that $114 billion bill, so they deserve to know not only the cost but also what it has gotten them.”

Sopko recently released his agency’s first ‘lessons learned’ report entitled “Corruption in Conflict: Lessons from the US Experience in Afghanistan.” It evaluates how the US government viewed the risks of corruption going in, how the US responded to the corruption it encountered, and just how ineffective those responses were.

The SIGAR analysis describes how the pursuit of strategic and military goals all too often trumped concerns about fighting the corruption that US personnel found rampant throughout Afghan society.

According to the report, the United States facilitated “the growth of corruption by injecting tens of billions of dollars into the Afghan economy, using flawed oversight and contracting practices,” while collaborating “with malign power brokers” all in hopes of realizing short-term military goals.

As a consequence, the United States “helped to lay a foundation for continued impunity” for bad actors that ultimately undermined the “rule of law” and actually promoted the kind of corruption that had historically driven the local population away from the central government and “to the Taliban as a way of expressing opposition” to a government they believed to be illegitimate.

The SIGAR report quotes former US Ambassador to Afghanistan Ryan Crocker making the disconcerting observation that “the ultimate failure for our efforts wasn’t an insurgency. It was more the weight of endemic corruption.”

SIGAR’s investigations documented “poor US oversight, procurement, and contracting practices that were enabling corrupt behavior.” As a result, lacking “sufficient controls on US funds, millions of dollars in US reconstruction funds for Afghanistan were being wasted.”

“The Afghan government was so deeply enmeshed in corrupt and criminal networks that dismantling them would mean dismantling major pillars of support for the government itself,” according to SIGAR’s report. “One part of US policy corrupted Afghan officials while other parts tried to investigate and root out corruption.” Benchmark studies reviewed by SIGAR’s researchers suggested that a donor nation’s capacity to absorb aid ranges from 15 to 45% percent of the recipient’s GDP. In the case of Afghanistan, too much money was a key problem. SIGAR reported that “US reconstruction assistance to Afghanistan surpassed 45% percent of Afghanistan’s GDP, reaching a high of 105% percent in 2010.”

As the money continued to pour in, SIGAR found “corruption grew so pervasive and entrenched that it came to pose a threat to the entire security and state-building mission.”

SIGAR’s reviews identified “abusive and corrupt warlords” who parlayed their status and acceptance by the US to gain “positions of authority in the Afghan government, which further enabled them to dip their hands into the streams of cash” flooding “into a small and fragile economy.”

SIGAR warned that corruption was “a corrosive acid — partly of our making” which was eating away at the base of “every pillar of Afghan reconstruction, including security and political stability.”

SIGAR concluded: “Failure to effectively address corruption in future contingency operations means US reconstruction programs may, at best, continue to be subverted by systemic corruption, and, at worst, may fail.”

Colonel Andrew Bacevich, a historian and author of several books, including “The Limits of Power: The End of American Exceptionalism,” is a West Point graduate who served in the Vietnam War and remained on active duty through the early 1990s. He asserts the US is in deep denial about its failures in prosecuting the war on terrorism in Iraq and Afghanistan.

“We have not won this war,” Bacevich told a Boston University audience in 2014. “We are not winning this war and simply pressing on is unlikely to produce more positive results this year or the year after.”

“To insist on accountability is to go out on a limb,” said Bacevich, whose son, an Army first lieutenant,  was killed in Iraq in 2007. “You would open yourself up to the charge of not supporting the troops, or of being an isolationist, or of not believing in American global leadership and worst of all, of not believing in American exceptionalism’s unique calling to save the world.”

“The absence of attention to SIGAR’s work is quite telling, in my view,” Bacevich wrote WhoWhatWhy in an email. “Rarely has so much money been squandered to such little effect with so few people taking notice.”

Below, is our complete interview with SIGAR John Sopko:

WWW:What’s the hardest part of your job?

SOPKO: “Maintaining aggressive oversight in an unstable atmosphere comes with a lot of roadblocks. Security concerns, missing documents, and access to decision-makers and implementers involved in decades-old projects can make our job difficult.”

WWW: Do you think that the average American is aware of the scale of the investment their government is making in Afghanistan?

SOPKO: No I don’t, and that is why I take my job so seriously. We have spent more in Afghanistan than we did on the entire Marshall Plan to rebuild postwar Europe. The American taxpayer has had to foot that $114 billion bill, so they deserve to know not only the cost but also what it has gotten them. SIGAR prioritizes transparency and accessibility in our work for that reason.

WWW: What’s the connection between rooting out corruption and the success of the American efforts in Afghanistan?

SOPKO: “A report we recently released found that systemic corruption has corroded US efforts in Afghanistan across nearly every sector. It has undermined support for the Afghan government and funneled money to the insurgency, threatening the stability of the state. US investments depend on Afghanistan remaining secure, stable, and democratically-governed, so our ability to recognize and address the threat of corruption is critical.”

WWW: Is it fair to say that SIGAR’s reports have been prescient in that they identified problem areas that became vulnerabilities that are exploited by the Taliban?

SOPKO: “I hope so, it is certainly our goal. In a war zone like Afghanistan, faulty and fraudulent work can kill people. We take that risk very seriously and it is why we have teams set up to identify and alert Afghan and US officials to immediate threats.”