Where in Afghanistan Did $35 Billion Go? - WhoWhatWhy
Reading Time: 2 minutes

SIGAR’s request for information from the Department of Defense.

Out of $56 billion that the Department of Defense (DOD) has spent on Afghanistan’s reconstruction, only $21 billion can be properly accounted for.

The $35 billion discrepancy is revealed in a new report from the Special Inspector General for Afghanistan Reconstruction (SIGAR).

SIGAR’s core mission is “to prevent and detect waste, fraud and abuse” in the Afghanistan aid program. Yet the Pentagon is claiming that it would be “extremely labor intensive to compile information” on how exactly the remaining $35 billion has been used.

Here is a letter from SIGAR asking the DOD to make more information available, and here is the Pentagon’s response as to why it could not.

In all, Congress appropriated $104 billion for Afghanistan reconstruction between 2002 and 2014. Of the $66 billion that went to DOD, $56 million has been committed to outside contractors. The SIGAR report offers a fine-grained analysis of the $21 billion in contracts that DOD was able to track — while drawing attention to the $35 billion “gap” in accountability.

As a point of reference, Afghanistan’s gross domestic product in 2013 was $20.65 billion, according to the CIA’s World Factbook.

The vast majority of the money that was adequately tracked went to the Afghan Security Forces Fund (ASFF). Exactly what this money bought may never be known. In 2014, the Inspector General of the DOD issued a report that found the Government of the Islamic Republic of Afghanistan lacked “the ministerial capability and capacity to manage and oversee ASFF direct contributions.”

The next largest recipient of DOD funds was the Drug Interdiction and Counter-Drug Activities fund (DOD CN); the lion’s share of this allocation ($569 million) went to the Academi Training Center. Academi is part of a successor company to the former security contractor Blackwater. In 2014, one former Blackwater agent was convicted of murder while three others were convicted of manslaughter and weapons charges for the 2007 deaths of 17 Iraqi civilians. 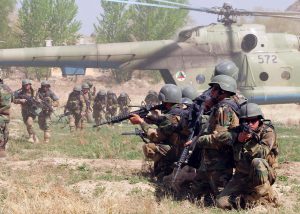 Afghan security forces on the ground.

The SIGAR report does not imply that the Pentagon acted illegally or even inappropriately. The main problem seems to be that DOD procedures before 2010 did not properly sync with the Federal Procurement Data System (FPDS). The report does not say whether any steps are being taken to provide the public with the “detailed and comprehensive information” needed to supply a full accounting of “how and where our reconstruction funds are spent.”

The Pentagon is notorious for overspending and losing track of money. If the latest SIGAR report is any indication, it looks like business as usual in Afghanistan.

13 responses to “Where in Afghanistan Did $35 Billion Go?”