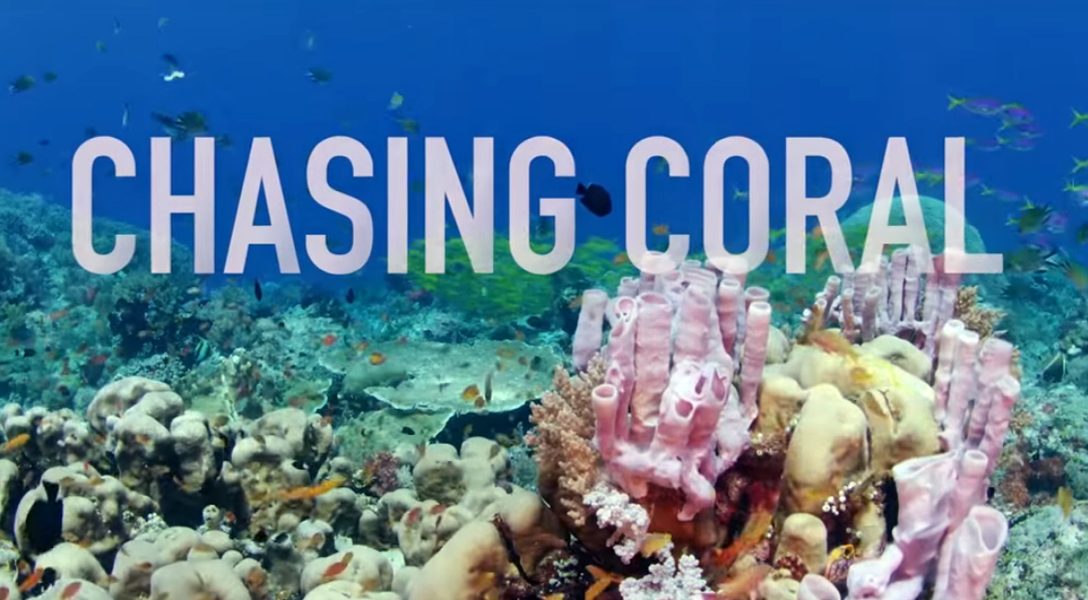 Our survival — and, for that matter, the continued existence of all life on earth — may be bound up with the well-being of coral reefs.

These sea creatures, with their astounding shapes and psychedelic colors, look like they’re from another planet. Contrary to popular belief, they are not plants, but marine animals.

And they are not doing well, as powerfully demonstrated in the new documentary Chasing Coral, which I saw at this year’s Sundance Film Festival.

Human activity — from ocean-front development and overfishing to myriad sources of pollution — are steadily killing these fragile, crucial ecosystems, affecting some 60% of the world’s reefs.

Add to this rising ocean temperatures — attributed by scientists to global warming — and you have a situation where three-fourths of the world’s coral is on the brink of annihilation. Half of the world’s largest reef — Australia’s Great Barrier Reef — was lost during the last 30 years.

And the destruction is accelerating: nearly a quarter of the remaining reef was lost in 2016 alone. By the time you read this, the figures will probably be worse.

Chasing Coral was directed and shot by Jeff Orlowski, whose 2012 Chasing Ice essentially proved the reality of climate change to anyone with an open mind. Now he’s done the same for coral death.

Orlowski makes clear that reefs aren’t just the cool phenomenon so many of us think they are. They provide homes and food for millions of fish and other animals. So by killing coral, we’re also devastating the livelihoods of fishing communities worldwide — and messing with our own food chain.

Coral reefs have been called the “rainforests of the sea.” Like trees, they provide food and shelter — a safe haven for spawning, a refuge for juvenile fish and other animals until they are ready for the open sea.

The economic value of coral reefs — for the fishing industry, the pharmaceutical industry, coastline protection, and tourism — amounts to billions of dollars a year, supporting millions of jobs around the world.

Medicine Chests of the Sea

Coral reefs have been called the “medicine chests of the sea.” From the plants and animals intertwined in the coral reef ecosystem, scientists are developing — or have already developed — drugs to treat cancer, leukemia, lymphoma, heart disease, AIDS, diabetes, Alzheimer’s disease, viruses, bacterial infections, as well as medicines that reduce inflammation, and relax muscles. And because corals are stationary, they have evolved chemical defenses to protect themselves from predators. Scientists are also researching the medicinal potential of these substances.

The study of coral has revealed a fascinating ecology of interspecies cooperation at work. Coral reefs are colonies of individual animals that feed on plankton at night with their tentacles. But what is most important about them is what controls their existence — and, indirectly, your existence: the symbiotic relationship between the coral and the algae that live within their tissues, and give the colonies their color.

When stressed, corals respond by — expelling their algae! Loss of algae is known as “bleaching” since the coral gets its color from algae. Bleaching leaves coral weakened, prone to disease and, eventually, without algae, this living organism is turned into stone. (To learn more about this complicated process, please go here, here, and here.)

Rising ocean temperatures are a major, global source of stress to coral. Ocean acidification — climate change’s “evil twin” — is another great threat to coral. It corrodes pre-existing coral skeletons and interferes with the growth of new ones.

Local threats include unsustainable fishing and destructive fishing practices (use of cyanide or explosives), pollution, sedimentation (muddying waters from dredging, changes in salinity, and even plastic bags which can smother coral. (Please see our earlier story on plastic.)

Over three years in the making. Chasing Coral takes us on what Orlowski calls a “crazy epic trip” by ranging across the globe, from nearby tropics to far away exotic places, and using time lapse photography to capture the death scene, as we watch one coral reef after another bleaching … then dying.

One moment we see a lush, vibrant, underwater forest, teeming with life, or a place where the coral lights up the ocean floor with an array of fluorescent colors, until there’s a bleaching event. Then we see them turn to stone.

Like a lot of doomsday films, Chasing Coral employs the somewhat uplifting ending, a seemingly essential marketing ploy to prevent total despond and paralysis. Yet his work is effective enough to give us the sinking feeling that the game is already over. The situation in Washington only contributes to that sense. But maybe…maybe not. At best, time is extremely short.

NOTE: Chasing Ice screenings can be found by visiting https://www.facebook.com/chasingcoral/. The documentary was snapped up by Netflix at the Sundance Festival. On Netflix, it can be added to “your list” and Netflix will let you know when it’s available for viewing. There’s also going to be a Virtual Reality version of Chasing Coral — where the impact of the bleaching is even more tangible. I got a preview and it’s an intense and personal experience. More info on the film here.